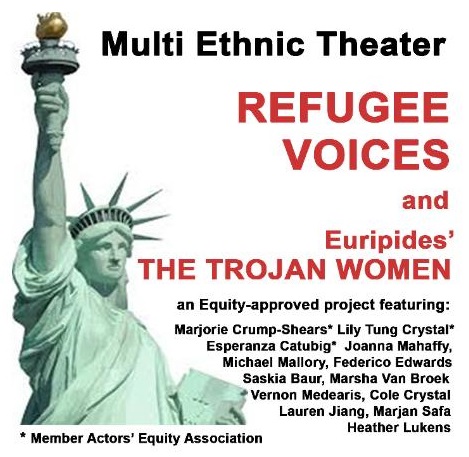 Director Lewis Campbell packs two spectacular tales of terror and pain into a brief 70 minute extravaganza. By the end, we are left speechless and angry. Campbell embraces big drama. He shows an adulterous Helen of Troy (sultry Joanna Mahaffy) emerging from her self-imprisonment in a tower, wearing a beautiful, ivory-toned satin dress, dripping with jewels.

As Helen pleads her case, she seduces us with her bewitching looks and poetic voice, though we know she’s guilty as sin. Helen manipulates her jilted husband Menelaus (imposing Federico Edwards). Even though she expresses remorse, Helen remains a “dark feminist.” She has profited from her affair with Paris in Troy.

The stage feels static when ten women war refugees testify to their suffering. But it’s hard to empathize with them because the readings become repetitious. Their readings make the women one dimensional, even in the face of terrible atrocities.

In Euripides’ “The Trojan Women,” five desolate Trojan War survivors are waiting to be deported—to be sex slaves to their new, cruel Greek masters. They include the former Trojan Queen Hecuba (phenomenal Marjorie Crump-Shears), and her virginal priestess daughter Cassandra (troubled Lily Tung Crystal), who has gone mad. The five women embody centuries of suffering, touchingly.

Campbell’s adaptation leads his characters to spend their time in a constant state of Post Traumatic Stress, the aftermath of all war. Multi Ethnic Theater unravels the grief and pain of women left behind, when everything they have come to love has been destroyed.

The shifting bodies and faces of “Refugee Voices and Trojan Women” reveal stories rarely heard or often forgotten. When will mankind end the suffering of war?