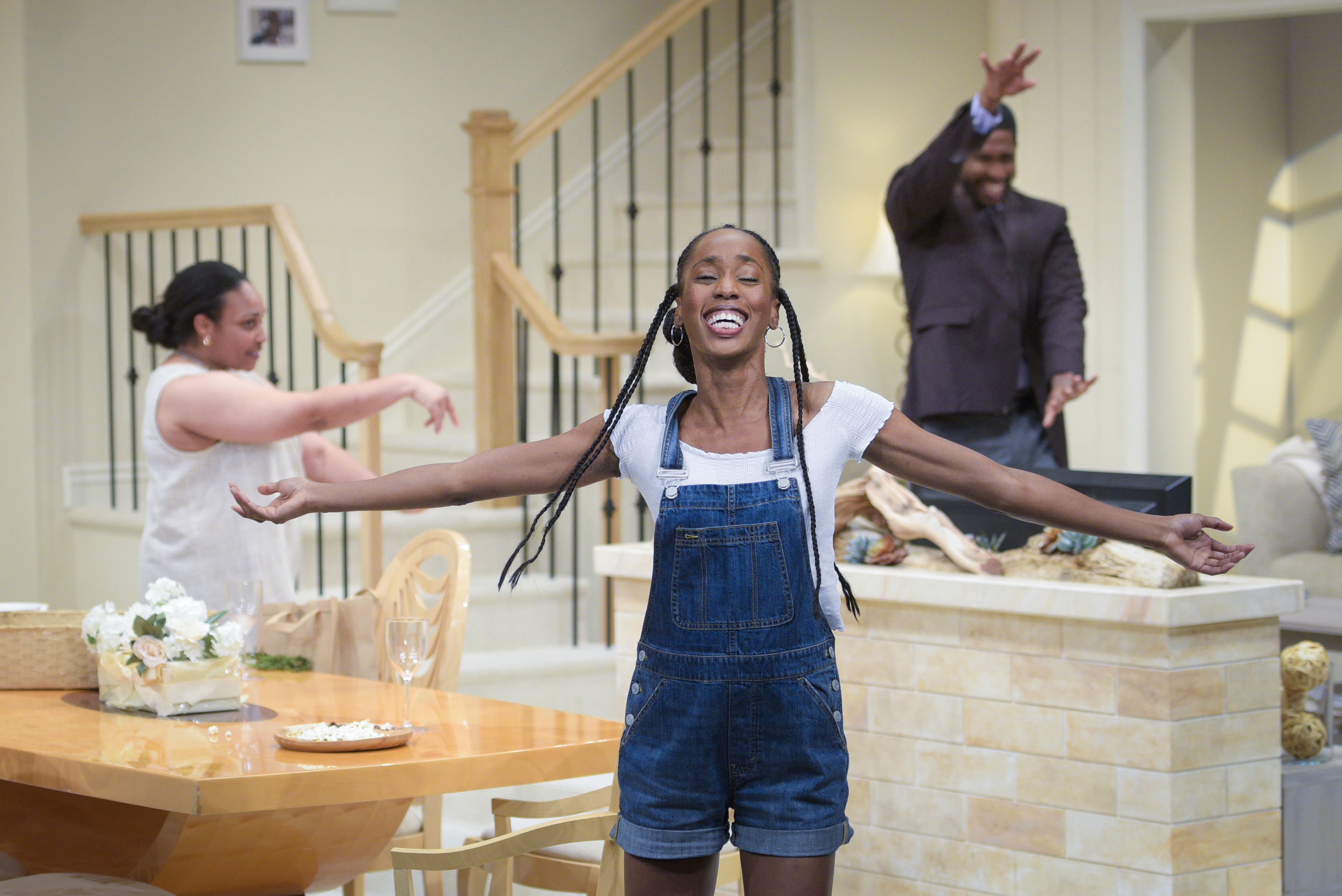 “I think we live in a world that enjoys Black Culture and dislikes Black People.”
–Cecil Emeke, filmmaker

“Fairview” breaks all the drama rules. In her brilliant play, Jackie Sibblies Drury finally figures out how to wake up White America to their meddling in Black culture—in a shocking new way!

When you see a Black movie or a Black play, what do you expect? Unless it’s aimed at the Black community, we see desperate attempts to beg America to empathize with People of Color. But to keep you hooked, they’ve got to sprinkle in some sassy moments, sensual dancing, or urban drama.

The Frasiers, an adorable middle-class Black sitcom family, like the Huxtables, fail to express enough suffering to please White America. When we hear four White voice-over friends commenting ignorantly on the Black show, I feel for the Frasiers.

The voice-over viewers say you can’t really be Black without being poor. The Berkeley audience gasped in shock, horrified by the stereotype. This Black woman, for one, is proud to hear Drury’s beautifully blunt dialogue. These viewers think they’re simply enjoying a T.V. show, when they are actually infiltrating Black culture with their White myths.

The White viewers display disappointment about the Frasier family’s pristine, vanilla suburban decor. But the Frasiers are anything but vanilla. From the start, up-tight mom Beverly (delightful Natalie Venetia Belcon) is frantically peeling carrots for Grandma’s birthday dinner. Beverly’s husband Dayton (playful Charles Browning) spends his time thrusting his hips, seducing his wife, and half-listening to her endearing threats. It’s a hallmark of Black families to talk so much shit and laugh.

Hilarious surrealism oozes through every scene. “Fairview” introduces an unpredictable, new play structure, using voice-overs, slow motion, surprise mime action, and audience immersion. When the Frasiers dance round the dinner table, they whip out a giant lobster, umpteen bowls of fruit, and an enormous turkey. We can’t stop laughing at the ridiculous sight of fabulous food flying freely.

When Black stereotypes begin to seep into the scene, the Frasier’s American sitcom turns upside down. We watch the White viewers instigate the destruction of the Frasier family. It’s funny and sad because the Frasiers are utterly perplexed. How did all these unpaid bills suddenly show up?

Dammit, can America please see Blacks for more than their oppression? Wait, we are we more than our oppression, right?

“Fairview” is the best play I’ve seen all year!