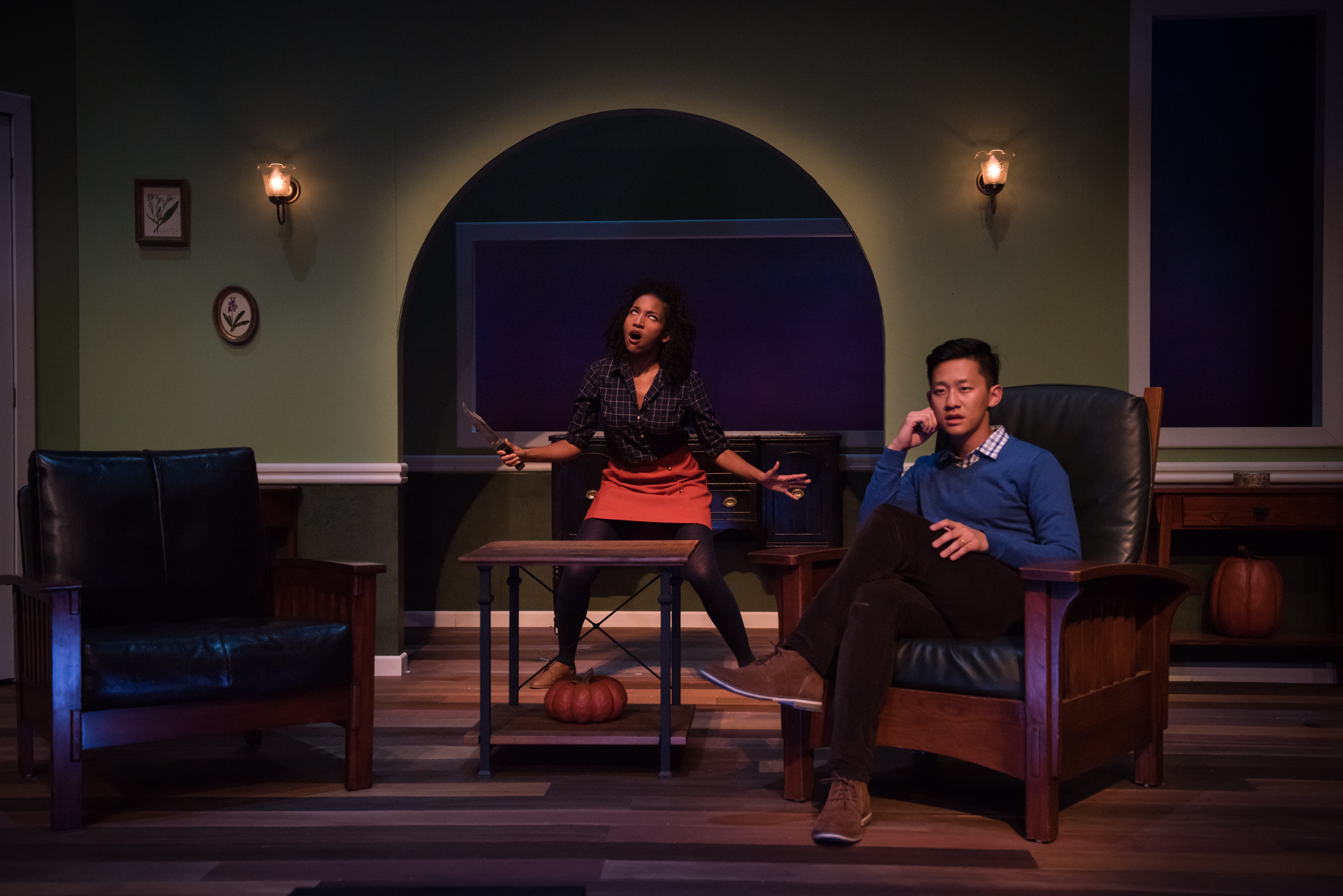 “70 Scenes of Halloween” aims to disorient. True to its name, the 70 scenes fly by at a rapid pace, creating a hyper David Lynch flow designed for laughs, which it delivers in spades. It’s Halloween night. The TV drones on while trick-or-treaters meander door to door. Jeff and Joan, the couple at the center of Jeffrey M Jones’ hilarious play are tucked away at home, hiding from the masked chaos outside–or so they think.

The quaint living room looks innocent, with a closet, TV, and a kitchen offstage. Two windows allow snapshots of the world outside, where the trick-or-treaters prowl just outside the house. While the children play outside, two demons run amok inside: a spry, maniacal psychopath in  werewolf mask and yellow parka, along with a cunning, wicked woman in witch mask and hat. She reminds me of the Wicked Witch of the West.

The terrorists behind the masks stand for Jeff and Joan’s inner demons, their hidden desires and deepest resentments.  Usually hidden behind masks, the demons explode into violence and mayhem.

Playwright Jones exposes domestic life by offering an escape. What lives behind the masks? Uproariously funny and deliciously twisted, “70 Scenes” examines a devastating question: Are we willing to expose ourselves—even to those we love?

Jeff and Joan (a sly recreation of the playwright’s name) are based on Jones’ failed marriage. A flurry of actors alternate in the two roles, switching scene to scene. The switches are often hilarious.

One scene ends in devastation and horror, when Joan is dragged into an inter-dimensional closet. The next scene, with a new Jeff and Joan, shows them blandly channel-surfing.  Though jarring, the quick changes and scene cuts offer slashing, slicing vignettes of a failing marriage.

I highly recommend seeing “70 Scenes,” if you can get there by Sunday, 14 October. The actors are delightful and manic, lending a delirious aesthetic designed to delight and terrorize. It’s raucous and acerbic, a rumination on the interior lives behind the masks we wear every day