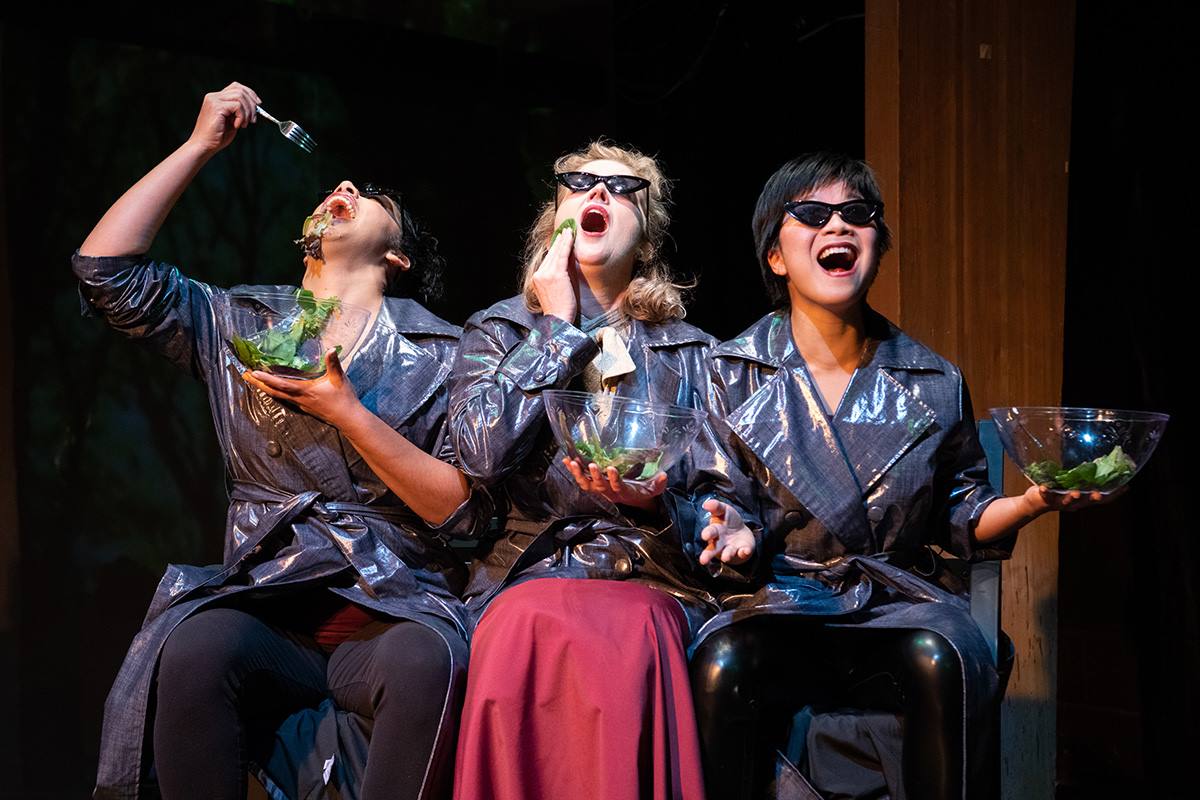 In the Shotgun Players’ production of “Women Laughing Alone with Salad,” playwright Sheila Callaghan and director Susannah Martin throw us into a fabulist underworld. Organs fall out of bodies, a Manhattan nightclub turns into 1920s Paris, and women struggle to drink from water bottles. The strange and frightening world is the world of advertising, social media, and pornography—our consumer culture.

My sister and I used to have a joke between us that the things we bought would make us better people. “Will those boots make you a better person?” “Yes, a much better person, the kind of person who owns those boots.” The boots were confidence. In “Salad,” women are similarly striving for a moment of respite, to purchase something, to do anything that will allow us to feel right in ourselves. We Lean In. We Just Do It. In the words of Kanye, we become “Harder, Better, Faster, Stronger.” But it doesn’t last long.

The play rolls out in a fractured stream-of-consciousness, like scrolling through a Twitter feed at 2 A.M. Quirky, surprising scenes flash by—oddly copacetic, serendipitous, repetitive (maybe that’s the algorithm). After a trio of women perform a surreal and silent collective salad eating, we meet Guy (impressively belligerent Caleb Cabrera). He is eating a big silver-wrapped burrito.

In a New York City nightclub, Guy watches sultry Meredith (compelling Regina Morones) gyrate and dance. She’s grinding, showing off her curves in a futile attempt to shed her heteronormative shackles. Wouldn’t it feel good to dance like no one’s watching? And isn’t that what we’re always telling each other? Meredith and Guy have sexually charged conversations before he brings her home to meet his girlfriend.

Any power that comes with this rage is short-lived, however. She is a passenger on his ride. As he storms out, she cradles herself, dissociating from her body. I understand her de-personalization. It’s the loss of self that comes with being ceaselessly physically evaluated and, simply, starvation. The girl is hungry.

The two women act as poles between which Guy vacillates. He becomes increasingly frustrated that, unloved, they don’t love themselves. Guy tries to work out his issues by talking to his mother (perfectly chameleon-like Melanie Dupuy), the only scenes where he is remotely likable. But his narcissistic, self-centered mother can not help. Her salads lack calories, her parenting lacks tenderness, and her hands literally lack fingers.

In Act Two, Sheila Callaghan presents us with a world of gender-fuck and reversal. Even in this topsy-turvy world, where male and female, old and young exchange roles, the same commercial attitudes rule.

Guy continues to struggle, and at the end of a play where his behavior has been unremittingly terrible, it’s difficult to feel sympathy or even any interest in him. His rebellions are commodified, stylized choices. He cannot escape. The world he inhabits is a war zone of personal brand advertising, best selves choosing best filters for better social media posts. He can buy the boots, but not the confidence.