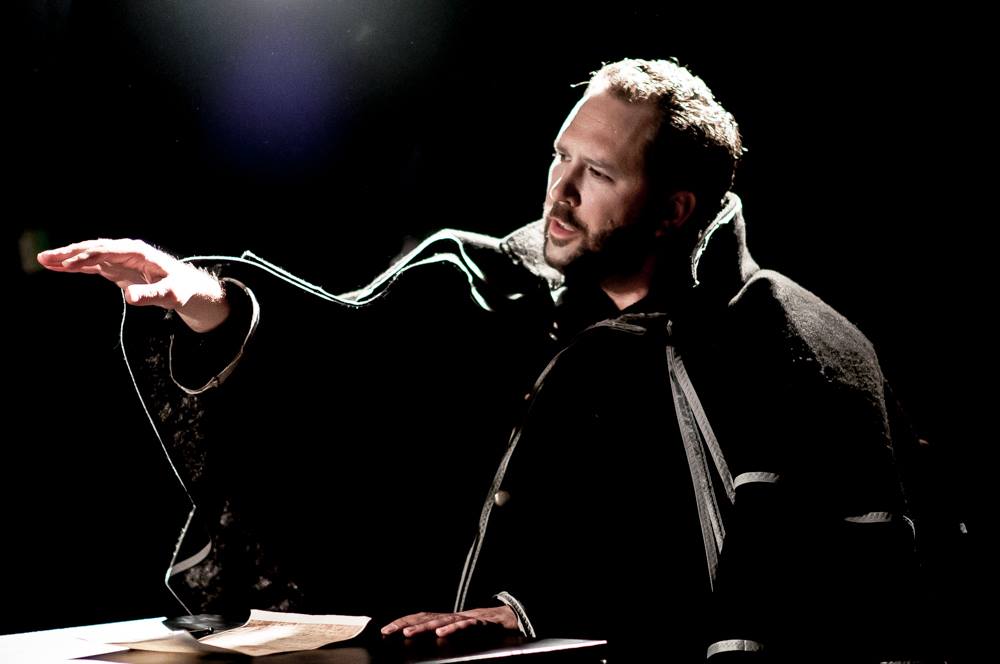 Steven Dietz Entices Us with Suspense and Mystery

I thoroughly enjoyed Theatre Lunatico’s masterful presentation of “Dracula.” Performed in La Val’s Subterranean Theater, the setting is intimate and spooky. Whispered echoes from the ensemble add to the eeriness. An ageless story about the vampire who cannot die, Lunatico’s “Dracula” impressed me with superb acting, costuming, and staging.

“Dracula” opens in London, 1897, where serious Dr. Seward (resolute Shoresh Alaudini) has fallen in love with the fickle Lucy (versatile April Culver). Dr. Seward is determined to make a name for himself by understanding what causes the lunacy of a patient in the mental hospital, Renfield (talented Maria Grazia Affinito).  Alaudini perfectly conveys Seward’s stalwart nature, mingled with quiet desperation.

Maria Grazia Affinito, brilliant as Renfield, endears herself to us, creepily, with her desperate loyalty for Count Dracula (sinister Michael Barr). Renfield, the “madwoman,” is constantly on-stage, many times in the shadows, never allowing us to forget that something sinister is lurking in the dark, soon to be revealed.

April Culver deserves full marks for her dynamic performance as Lucy, initially sweet and simple, later taunting and vicious. Shawn Oda is perfectly cast as Mina, Lucy’s friend. She is completely genuine in her performance—stable, earnest, and virtuous—then surprisingly cunning.

When Lucy falls ill with a mysterious sickness, Seward calls on his mentor Van Helsing, expertly played by the unfaltering Eileen Fisher. Fisher moves the play forward, inspiring us with her directness and determination. “Are we to cower in the face of such adversity?” she demands, urging the others to join her in the fight against evil.

Leon Goertzen is excellent as Jonathon Harker, Mina’s betrothed, with his deep, booming voice. The maid (versatile Jessica Lauren) and the hospital attendant (convincing Bryce Smith) round out the fantastic cast.

Along with the top-notch acting, Theatre Lunatico incorporates first-rate details. From the blood transfusion kit, to the actual holes burnt through pages of a diary, to unnerving echoes–the creative team spares no horrors. Bravo to all Lunatico’s.