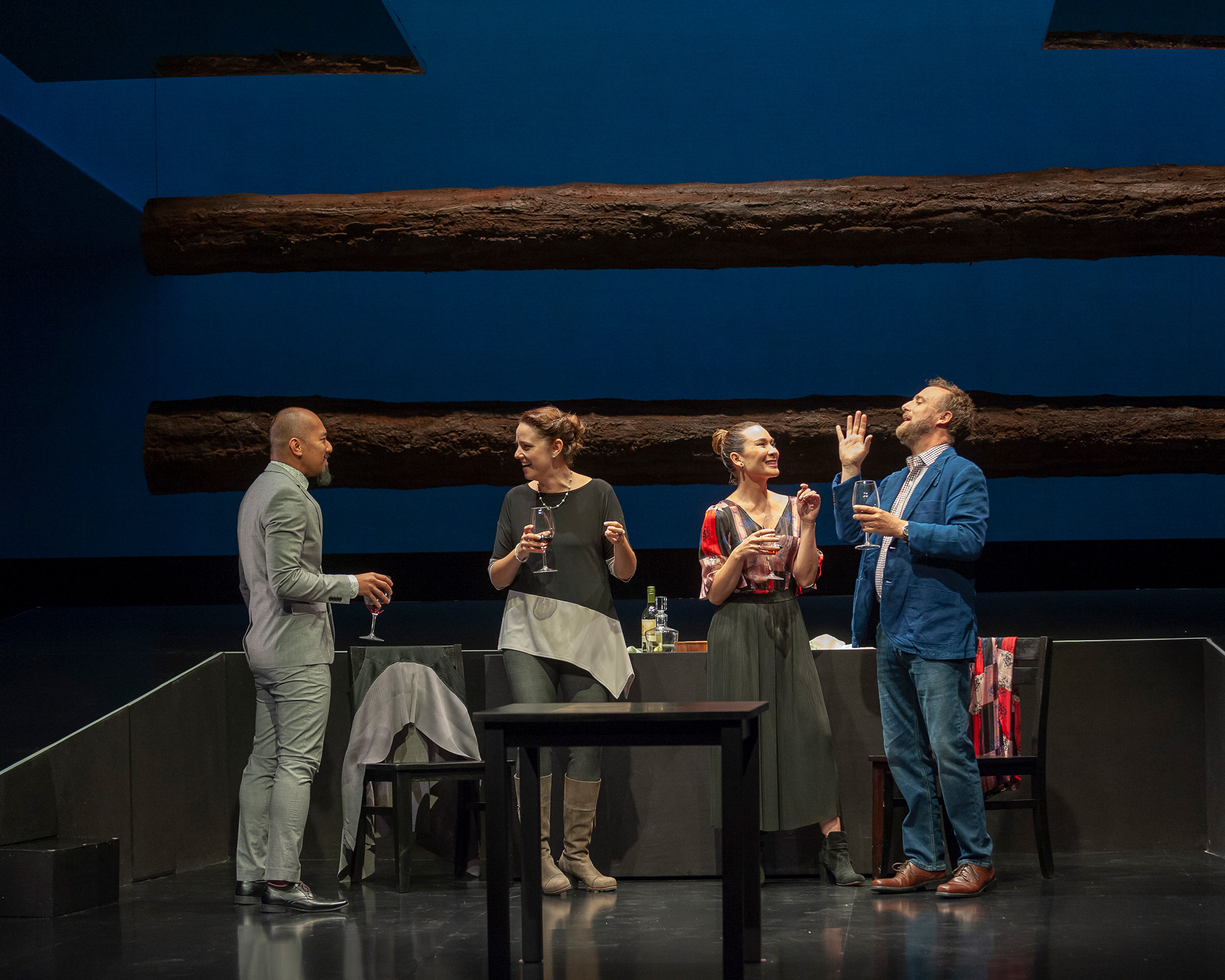 Ben drops an “innocent” remark at a cocktail party about a camping trip/date in long ago college days, and hints at U.S. “mountain man” tendencies. That’s all it takes to taint the relations between two inter-racial couples, who teeter on the edge of making the China-U.S. political/cultural debate into their own marital disasters.

Christopher Chen’s brilliant dialogue between four people over small issues brilliantly turns snobbish banter into international diplomatic crisis. His two super-techy couples, each in an Asian/American marriage, fall to bits when the slightest discord appears on the horizon. They are so full of millennial tics and clichés, like “checking in” and “feeling comfortable” that they can barely get through a conversation without being offended—and offending.

White China Expert, or, “White China Guy” anxious Ben (intense Cassidy Brown) is married to Samantha (scrupulous Charisse Loriaux), a sharp Asian American techie. They make a harmonious and clever couple, but he’s trying to start a new job, and she may be getting fed up with his ingratiating manners. They drink, they joke, they parade around the elegant black sloping ramps framing the stage. And their partners may hover there, oddly listening in on conversations, like Banquo’s Ghost.

They are having drinks with Ben’s new colleague Daniel (contemplative Jomar Tagatec), who is married to high-powered corporate lawyer Lindsey (astute Katie Rubin). In this case, Daniel is of Asian origin and Lindsey is the non-Asian. The two mixed couples walk a knife-edge of sophistication—always on the edge of cutting themselves. All four actors make us quiver with their nerves, their quips, and their superb repartee.

Anything causes dangerous sparks for these super-smarts, conscious of their own superiority. Seems that Ben and Lindsey went to college together and went on a camping trip—years ago. Roll out glimmers of past romance and sex. Danger.

And her husband, sweet and moody Daniel, subtly portrayed by Tagatec, gets bent out of shape when this little bit of nostalgia slips out. Daniel resents the whole American “Mountain Man Thing”—though he’s damned Yankee, himself. But Daniel enjoys tormenting Lindsay with racial condescension, while two enormous horizontal redwood logs hang magically, lighted from below by Hell fires. The logs loom behind them. Will Nature fall and crush them, or can they dodge the blow?

Nature herself becomes a part of the acrimonious debate between the two couples. In a carousel of conversations, everyone gets a turn, together in marvelous ensemble work.  Those who not engaged listen from the ominous, sloping ramps. In this transparent universe, all their secrets are uncovered: social media on steroids.

The drama is thrilling, the word play engrossing, the outcomes surprising. We hang on their every twist of the knife. We are puzzled and delighted by word-play and yuppie jargon. Add to that the undercurrent and groundswell of Chinese American identities at play, and the whole great issue of “The China Question” that looms like those suspended enormous redwood logs over us all—and we have enough mystery for a Chinese box of plays.

Once you see “You Mean to Do Me Harm,” superbly directed by Bill English, and ingeniously designed by Angrette McCloskey, you will watch out what stories you tell from college. We may tread more lightly on U.S. connections to competing cultures. Chen shows that the empire of US no longer rules.

“You Mean to Do Me Harm” by Christopher Chen, directed by Bill English, at S.F. Playhouse, in San Francisco, through Saturday, November 3, 2018. Info:  sfplayhouse.org