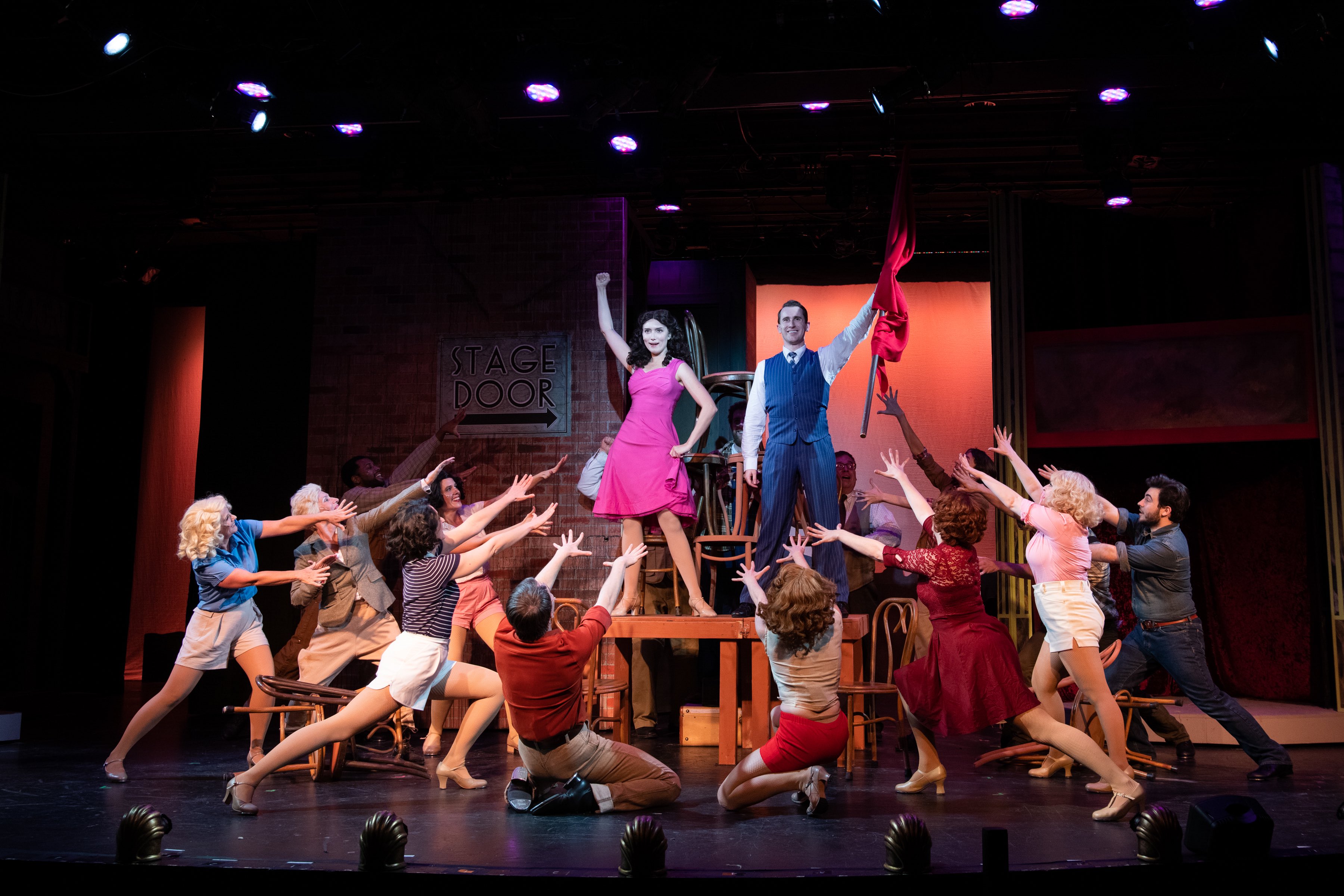 Here’s a musical that illuminates 30s history. “Crazy for You” takes place during the Great Depression—even though it debuted in 1992, with songs by George and Ira Gershwin. You can predict the story, and still be surprised by the delightful dancing and excellent singing from Bobby Child, Polly Baker, Bela Zangler and all the typical Depression characters played by this superbly talented troupe.

It’s a musical about musicals, and the The Bank is foreclosing on the old rundown theater in the abandoned mining town of Bedrock, Nevada—dying out like our Rust Belt states, now. Bobby dutifully does his bitter banker mom’s bidding by delivering the foreclosure papers to the theater in the nearly abandoned town. He would rather be in NY dancing at Zangler’s Follies. Sounds like 2008’s foreclosures on people’s homes…

In place of New York, the brick building NYC sets twirl around revealing the wooden ramshackle dance hall and saloon of Bedrock. So here you have the contrast between the East and the West, between eastern banks and western poverty, very “Wizard of Oz.”

In the rundown Nevada mining town, like our own rustbelt cities of the Midwest, depressed Bobby Child (brilliant Conor DeVoe) discovers poverty and despair among the cowbys of the ghost town. Sexy Polly (lyrical Danielle Altizio) sings and dances her heart out in private. Bobby starts to woo her but she rejects him when she finds out he’s there from the Bank.

Director Matthew McCoy makes sure Bobby and Polly’s love connection leaves laughing and wanting more. “Crazy for You” is brisk and exciting and beautifully paced. The songs come from an old Gershwin musical and includes old favorites like “Embraceable You.”

Bobby disguises himself as the great Bela Zangler from NY and begins to woo Polly with a new song and dance—the revival of the old theater, to make the money to save the old theater.

Posing as Bela Zangler, Bobby turns Polly into his Bella amore. Soon the whole town is dancing and singing, and they are throwing a show to get the money to beat the Bank. No need to tell the rest of the story, it’s all there in the beautiful songs of George and Ira Gershwin, the amazing tapping feet of Conor DeVoe, and the love that defeats the whole darned Depression.

“Crazy for You” by George and Ira Gershwin, directed by Matthew McCoy, book by Ken Ludwig, musical direction by Jon Gallo, by Bay Area Musicals, at Alcazar Theatre, through Sunday, December 16, 2018. Info: bamsf.org