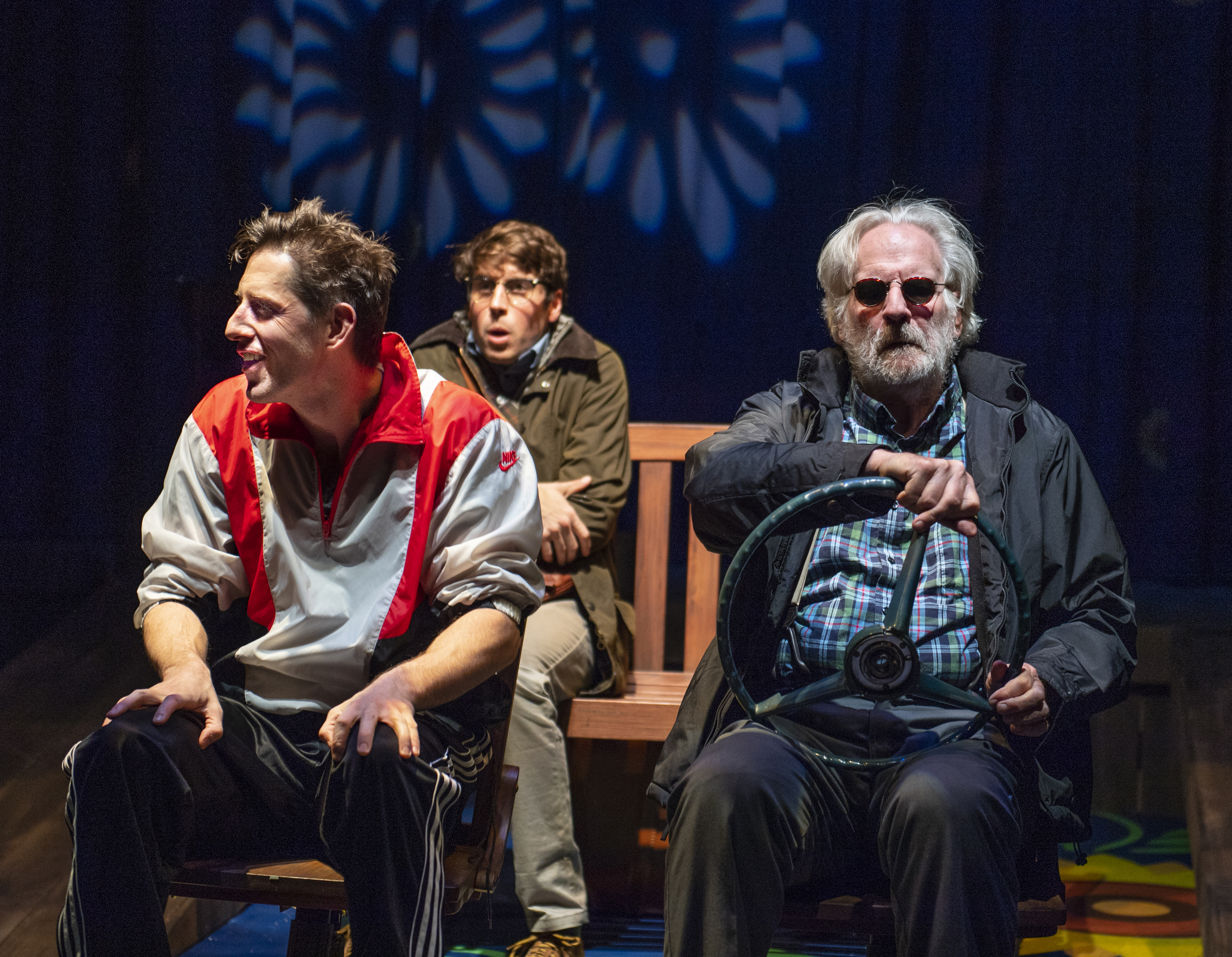 Simon Block’s adaptation of Jonathan Safran Foer’s novel Everything is Illuminated exposes the unfortunate ignorance that swirls around us. Foer articulates the urgent need for empathy, today.

Jonathan (energetic Jeremy Kahn)—channeling a young, self-important Rick Moranis—arrives in Ukraine intent on finding a woman in an old family photograph. Jonathan believes that the woman, Augustine, saved his grandfather from the Nazis during WWII, enabling him to escape to New York and begin an American life. Kahn does a great job playing the eager, naïve Jonathan Safran Foer.

Led by the comically verbose Ukranian translator Alex (mesmerizing Adam Burch) on a wild drive to Lviv, Jonathan discovers a world of suffering and hardship. As Alex, Burch preens and leers in his shiny sports gear. When Alex narrates, he is engaging and when he interacts with Jonathan and his own Grandfather, he is a convincing throwback to a harsher world.

On their bizarre road trip, they meet a feisty young woman (versatile Marissa Keltie), and a lyrical older woman (sympathetic Lura Dolas). Dolas’ delicate, mysterious Woman remembers the atrocities that took place in the shtetl (small Jewish village) of Trachimbrod so long ago. The bird-like Woman shares as much as she can until it’s too painful. With long white hair and trembling movements, Dolas shines as the grieving survivor.

For Jonathan’s comic quest, Foer (and Block) have woven a sub-plot that springs like a ghost from his brain. As an arrogant young writer, he imagines and elaborates his ancestors’ stories.

One of those stories is a violent rape of his great-great grandmother. Jonathan claims that putting those terrible things in writing will finally illuminate everything. Ultimately, though, for me, it is just another man writing another rape scene, trying to arouse our emotions. The image of a Cossack raping a young girl is unnecessary and over the top.

By the end of the play, many things—but not “everything”—are “illuminated.” Their experiences have given these young men understanding and a sense of clarity about the present. The young guys cannot just leave this impossible Grandfather alone with his thoughts.

Jonathan has entered a swirling river of history. What starts out as a comedic clash of cultures evolves into the painful opening of old wounds.  “Everything Is Illuminated,” under the sure hand of Director Tom Ross, depicts an intriguing, somber, thought-provoking trip to Ukraine, past and present.

“Everything is Illuminated” –based on the novel by Jonathan Safran Foer, adapted by Simon Block, directed by Tom Ross, at Aurora Theatre Company, Berkeley, through Sunday, December 16, 2018. Info:  auroratheatre.org