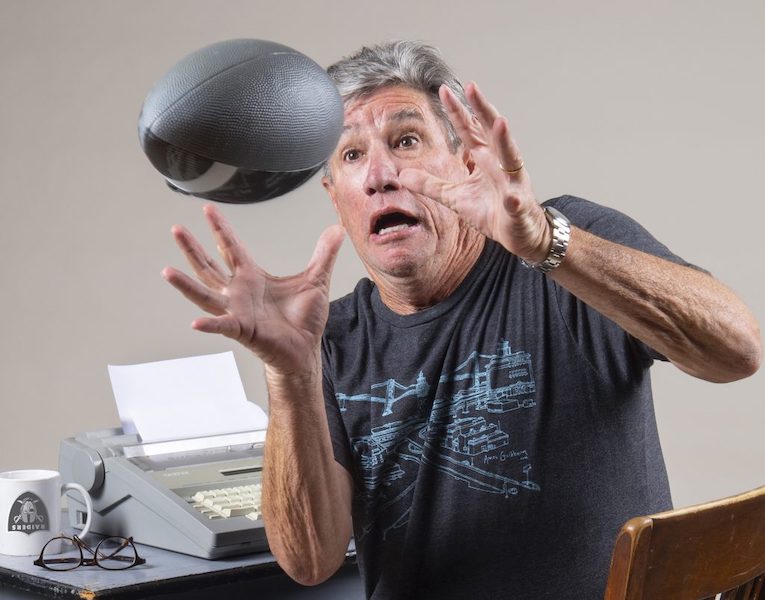 Chuck (C.W.) Nevius has been writing news and sports stories for 40 years at the San Francisco Chronicle.  Now Chuck is turning his storytelling skills inward, and the result is mesmerizing. Nevius’ wonderful performance reaches the heights when old emotions attached to news stories rise to the surface.

As a young man in Colorado, he covered local high school football games before moving to San Francisco to work at the Chron. Nevius guides us through his career with refreshing honesty, showing us his triumphs and struggles. After years in print, his voice onstage feels natural and conversational. Nevius’ one man show offers a mood of humble gratitude towards the people he brings to life.

In a small Colorado Springs newsroom, he came face to face with Franks Boggs, a former Oklahoma sports editor. The young reporter clashes with Boggs’ big personality and style. But pretty soon, Boggs becomes a mentor to Nevius, who describes Frank as always having his back. Frank Boggs passed away a year ago, and by the end of the show, Nevius has beautifully memorialized his dear friend.

When he talks about the notorious Raiders, Nevius skillfully imbues each character with care and faithfulness, never straying into mockery. In these moments, Nevius displays his natural talent for performance.

The wacky real life characters of the ‘76 Oakland Raiders give Nevius many chances for humor. His portrayal of Al Davis, longtime eccentric team owner, is especially hilarious. As someone who was not around to witness Al Davis’ infamous shenanigans, I found myself laughing in disbelief.

When recounting the case of Quintin Dailey, Nevius does not shy away from a serious approach. Dailey, a University of San Francisco All-American basketball star, was arrested for the sexual assault of a woman in the Catholic university’s dorms. In his emotional retelling of breaking the story, Nevius re-lives his sensitive feelings about Daily’s lenient treatment.

Nevius evokes familiar pain when he reviews his reporting of the case of the young sports star who was given little to no punishment for the sexual assault. Swap in the name of Brock Turner and the details barely change, bringing the show into the present.

Chuck Nevius gives us a fascinating glimpse into a reporter’s life, with a new-found talent for the stage. Let’s hope there is more to come.