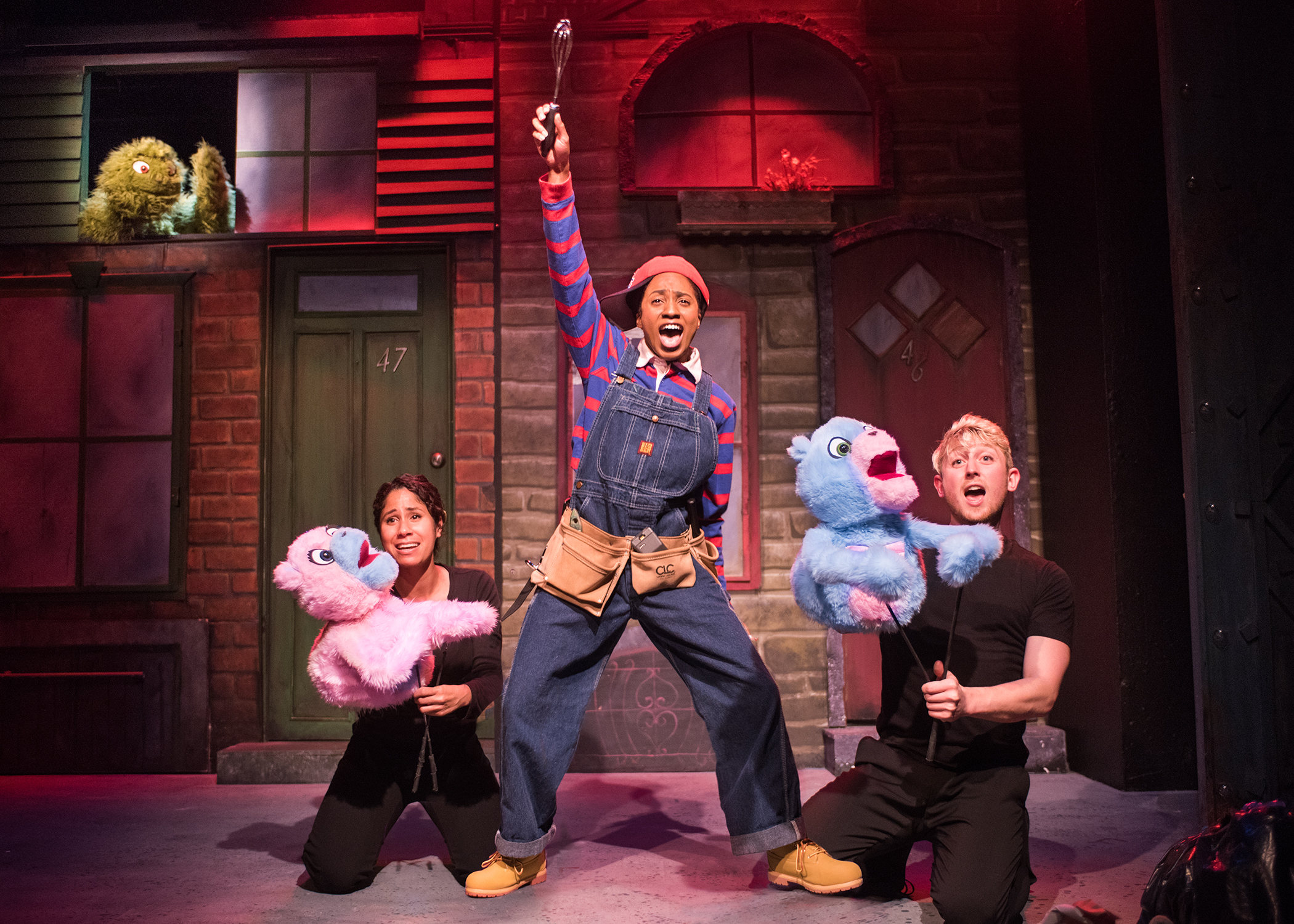 “I love the lively ones,” said my friend, after seeing “Avenue Q.”  She’s right. Spirited and profane, with smart lyrics, this musical pleases everyone—except The Grinch and Ted Cruz.

For some an adult parody of “Sesame Street” seems an odd staple for the holidays. Yet opening night was sold out for this, the sixth consecutive December of “Avenue Q” at New Conservatory Theatre Center, a true San Francisco holiday tradition.

Four puppeteers, playing multiple roles, combine with three puppetless actors to tell the story of a young man/puppet named Princeton who is beginning life in New York’s low rent “Avenue Q.”  He seeks his purpose in life, arriving in the City singing, “What Do You Do with a BA in English?” Princeton learns about being a grown-up:

… years of college, and plenty of knowledge,

Have earned me this useless degree.

I can’t pay the bills yet,
‘Cause I have no skills yet,

The world is a big scary place!

Princeton soon befriends his neighbors, each with their own problems, and of course he falls in love.  You’ve seen these Big City stereotypes before: there’s the wanna-be comic, the closeted gay Republican Wall Streeter, and the aspiring immigrant. Also, the grown child celebrity fallen on hard times, the ‘good girl’ next door, and the ‘slut.’  It’s parody, remember, so political correctness is decidedly checked at the door.

It’s less likely you’ve heard songs like these before:  “You Can Be as Loud as the Hell You Want (When You’re Makin’ Love),” “It Sucks to Be Me,” and that crowd favorite “Schadenfreude.”   Funny, isn’t it, how the subjects we avoid talking about publicly make great songs?

Acting, singing, dancing, and puppet mastery—the talented cast at NCTC is always delightful. We have so much fun because the performers, delivering in all artistic departments, are also obviously having a blast. Maya Sherer’s voice stands out, and her “There’s a Fine, Fine Line” is a sweet, heart-breaking lover’s lament.

First conceived in the 1990s, and winning its upset Tony awards in 2004, parts of “Avenue Q” feel dated. I wish “Everyone’s A Little Bit Racist” dug deeper and were updated for our  racist time.  But the charm of tradition comes from being dated, and I look forward each year to my favorite scenes.

Whenever the cuddly, lovable Bad Idea Bears appear—and give their terrible advice—I fall out of my seat laughing.  When we hear the name of the pre-school boss teacher, which I restrain myself from giving away here, the entire audience falls out of their seats.  Finally, it’s the only time of the year I get to see explicit, hysterically funny, puppet sex.

Locals are at home with the themes, and visitors will find something unconventional.  If grown-ups are visiting over the holidays, “Avenue Q” will provide a smart bet for a good time.