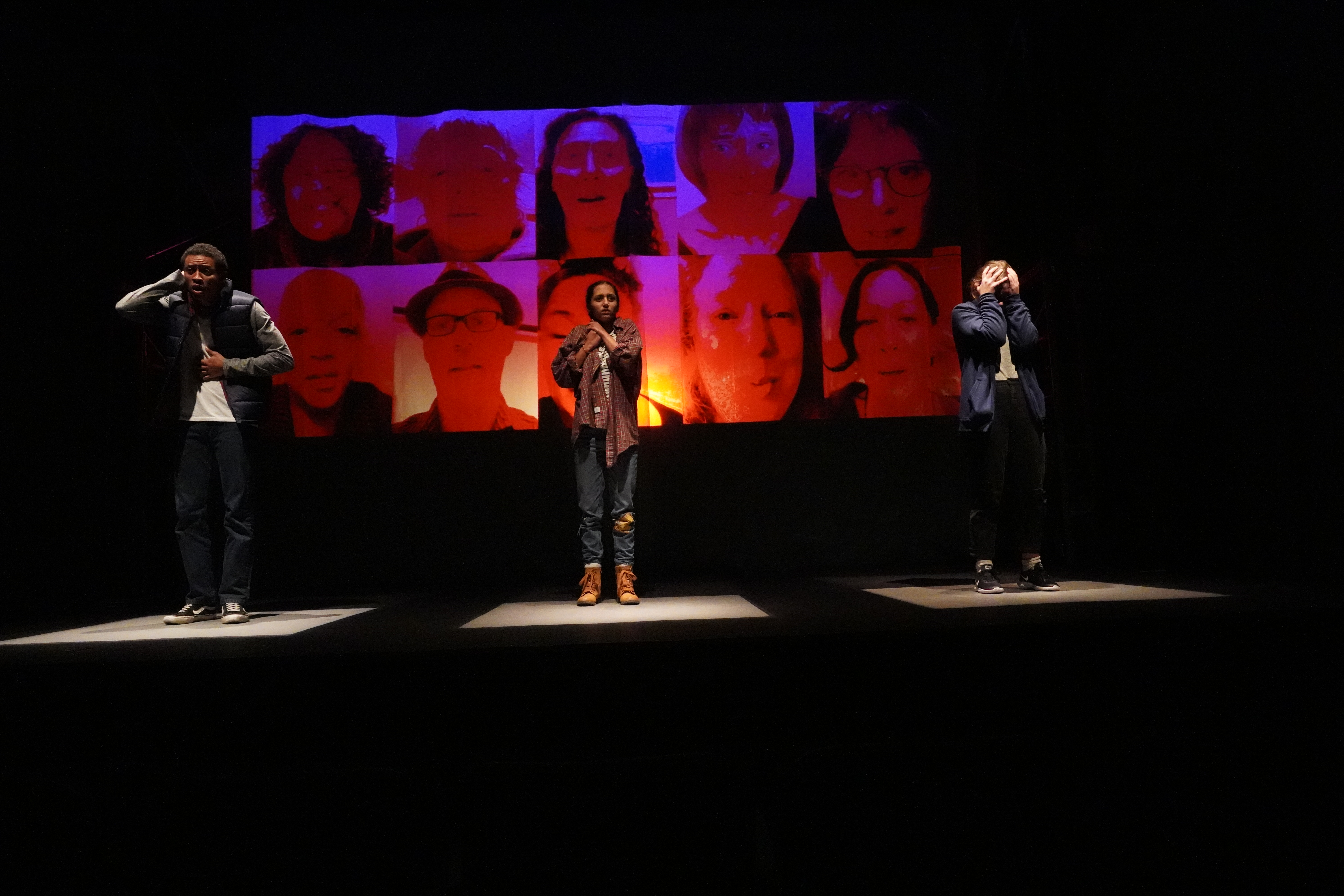 When we walk into Live Oak Theatre, it looks like a construction site. We see walls lined with giant plastic tarps hanging from ceiling to floor. Two giant metal scaffolding towers stand at either side of the plastic-draped stage. Multimedia projections, sound effects, and lighting add a sci-fi aura to the show.

Three teen performers appear: Leela Kiyawat, Unity Tambellini Smith, and Justin Howard. They play Dee, Tara, and Anton, who are the sole survivors of the end of the world. They say they “might be the last people on earth.” At times, all three say their lines in unison and other times, they interrupt and talk over one another without losing a beat.

Each performer begins with her/his own story and home life: one African American, one Indian, and one Jewish. Slowly, each survivor becomes aware of the others. They work together to find out who else may have survived. Their moving and poetic language makes them both individuals and recognizable types.

In the old world of their parents, the teens took on gun violence and environmental destruction. Now, they have become the “new architects of humanity.” In this extended epic poem, we see the end of the world through the eyes and hearts of three superb young actors. When the beautiful Awele in a white gown enters, she plays The Woman of Irredeemable Hope who offers dreams to the young wanderers.

Director Jon Tracy asks apocalyptic questions: “What would happen if all the adults died of grief? What would the youth do with the future of the world?” Many local students have contributed to “The People’s History of Next.” TheatreFirst’s ambitious 8-month project, facilitated by writers Awele, Anthony Clarvoe, and Cleavon Smith, is written by “Everybody.”

“History of Next” is lyrical and engaging, with some slower moments. The actors us silence to great effect. They remind us of the students who speak out after Parkland. When Dee gets up on the scaffolding and drives a truck into the wasteland, she finds children–or, does she? The sequence feels long, but she brings her discoveries back to the others in a touching reconciliation.

In spotlight moments, Justin Howard elegantly deals with video projections of his remembered father. Each of the three talented actors turns in a stellar performance. Director Tracy promises patrons they can return to see the show evolve–all on the same ticket.

Congratulations to TheatreFirst for reaching out to students, schools, and artists. And thanks for letting us hear and understand the voices of our youth.

“The People’s History of Next” written by Everybody, facilitated by Awele, Anthony Clarvoe, and Cleavon Smith, directed & arranged by Jon Tracy, by TheatreFirst, at Live Oak Theater, Berkeley, through Saturday, December 22, 2018. Info: theatrefirst.com