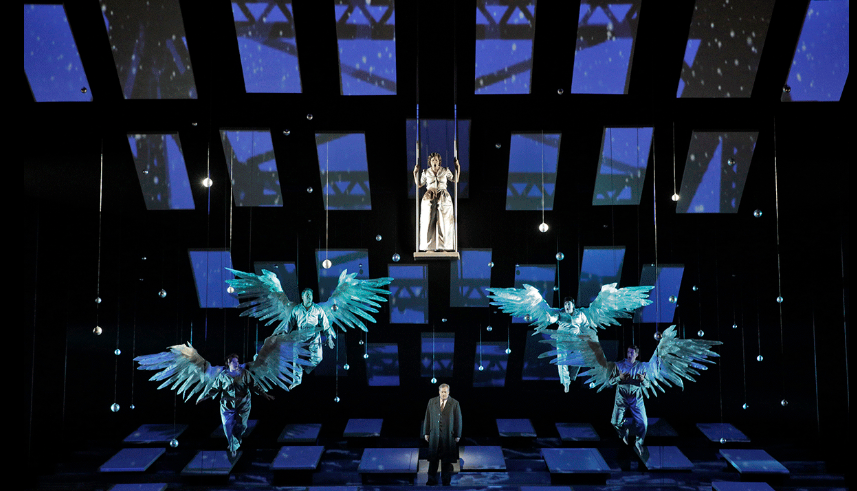 Fine singing, a thin adaptation, tune-starved but inoffensive music, and an awkward set characterize San Francisco Opera’s third delivery from composer Jake Heggie, after successes with Dead Man Walking in 2000 and Moby-Dick in 2012.

True to Frank Capra’s 1946 Christmas movie It’s a Wonderful Life, George Bailey is ready to jump off a bridge because his savings and loan bank is about to fail. Bailey’s friends and loved ones have been praying for him. The prayers are noted, and an angel-in-training—and the audience—are assigned to be his guardian and learn his life story via flashbacks. On the brink, Bailey wishes he had never been born, but Angel Clara shows him what would have happened to the town and its people had he never been there.

Learning Bailey’s life story becomes the bulk of the opera.

We learn that whenever a dream of Bailey’s is about to be fulfilled, he is forced to forego it out of moral duty. We see George’s courtship and marriage to what one critic called his “oppressively perfect” wife, Mary. We see his battles with his nemesis, the disabled, power-hungry Mr. Potter, a man without compassion.

Set Designer Robert Brill makes the flashbacks emerge from “doors” on pedestals all over the stage floor, like sarcophagi. Since such doors do not reflect our memory banks, what’s the point? All these ubiquitous obstructions impede movement of actors and chorus. During the high-school dance scene, for which Heggie invented a cute dance step and music called the “MeKee-McKee,” the actors can only fail their arms like windmills. A wasted opportunity. 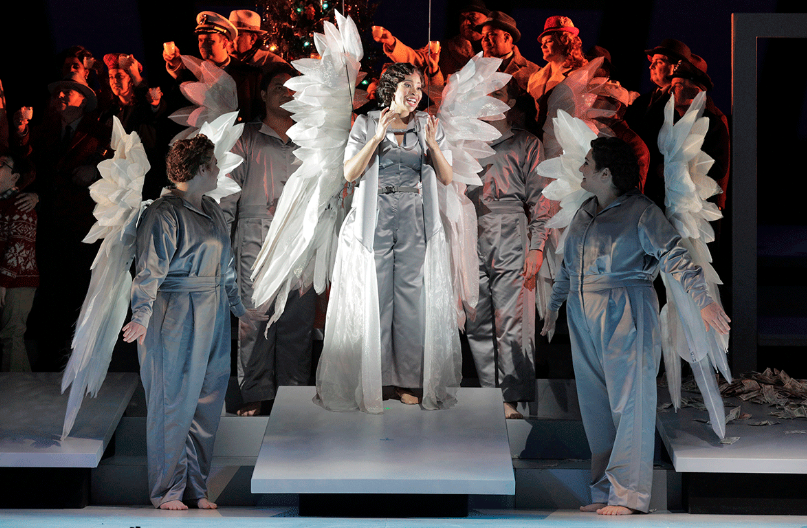 Librettist Gene Scheer cuts the screenplay to manageable length, but he loses most of the humorous passages. Scheer leaves semi-cheesy sentimentality, erasing much of the charm. The romance between Bailey and Mary remains strong, thankfully, and is beautifully—if not memorably—set to music by Heggie.

Soprano Golda Schultz makes a terrific Clara. Although Schultz shines in her opening number, counting prayers on a swing, Scheer and Heggie underutilize her in comparison to her counterpart in the film.

Tenor William Burden no way resembles the 20-year-old Bailey in the first half of the opera, but he has the delightfully clueless look necessary for George, and a wonderful voice.

Andriana Chuchman pulls off a Donna Reed lookalike, with a gorgeous soprano voice to boot. Everybody in the enormous cast of 33 turns a satisfying performance. And Rod Gilfry so convincingly portrays the villainous Mr. Potter that he laughingly received boos at curtain call. 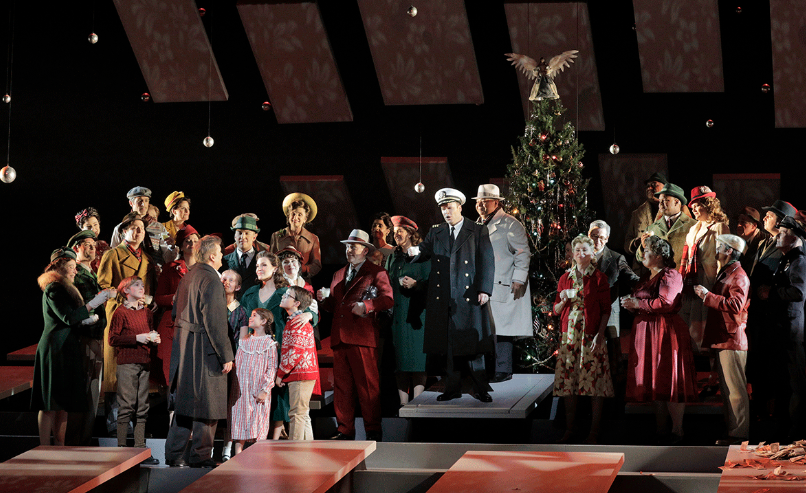 When Clara grants Bailey’s wish never to have existed, the first flash-forward, a “What if” 15 minutes toward the end of the two-act opera, the singing and music stop. Only spoken words and a barren, subliminal electronic ambience chill the proceedings. After Bailey receives his life back and joyfully reunites with friends and family, the cast and audience sing a rousing “Auld Lang Syne,” uniting us all under angels’ wings.

But a second flash-forward can sicken thoughtful opera fans. When we compare 1946 Hollywood America with 2018 Trump America, we may realize that mom-and-pop savings and loans were thrown off that bridge by deregulated markets. Mr. Potter, lately represented by unscrupulous, tranche-obsessed banks and greedy mortgage agents, caused a world-wide financial disaster.

Where are our angels today? 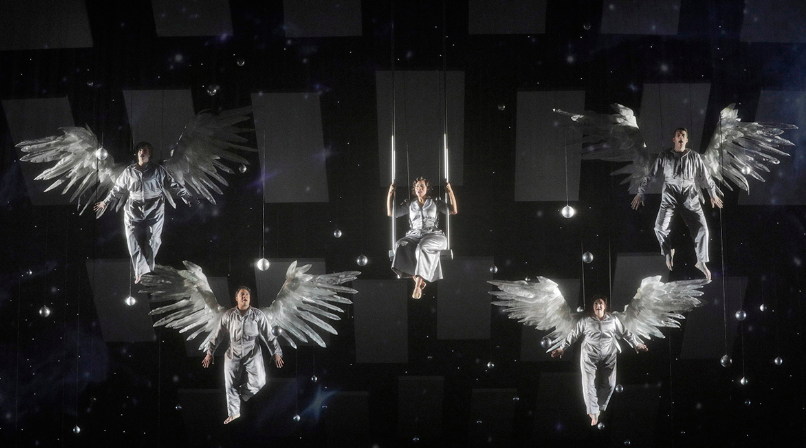