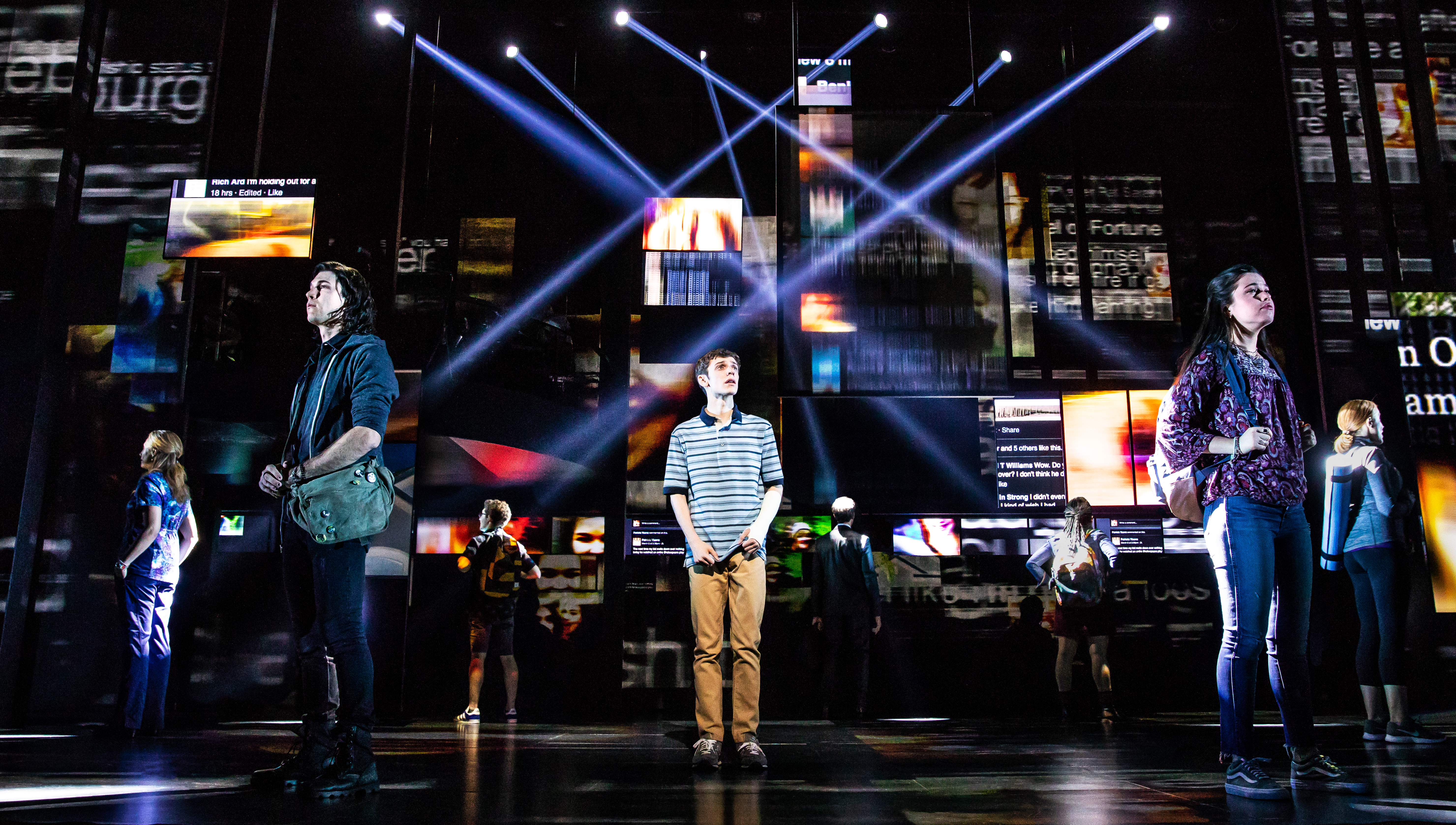 The plot of “Dear Evan Hansen” could be a teenie bopper movie: boy makes up story, the lies spin out of control, he comes clean. But this multiple Tony Award winning musical phenomenon has a Dickensian theme: Poor, invisible Evan ingratiates himself with the wealthy family of a classmate who has committed suicide.

With a top-notch cast and a flashing backdrop of floating computer screens, “DEH” becomes The Millennial Musical with a message. Gorgeously deployed screens make a striking backdrop of memes that reflect the high school world.

As Evan Hansen, Ben Levi Ross shines as a nerdy male lead. His Evan is strikingly twitchy and nervous, jerking away from eye contact. Ross glides into song, with heartfelt vocals, revealing  how an “outsider” feels. Songs like “For Forever” and “Disappear” share the suffering of painfully self-conscious teens.

Evan doesn’t “fit in,” and his Mom has him on meds. The title comes from the letters he writes to himself—on therapist orders. We learn that he loves trees and wants to climb way up and see the sky. Evan turns his back on his hard-working Mom, Heidi Hansen (sensitive, soaring Jessica Phillips) who works and studies but barely gets by.

Marrick Smith plays the moody bully Connor Murphy, with a sensual Goth presence. Smith expresses Connor’s agony in pointed songs: “Sincerely, Me” and “Disappear.” He reminds us of Columbine.

What starts out as a lie to Connor’s parents about their deceased son metastasizes into a web of made-up stories based on a fantasy of friendship. Connor’s needy parents, Cynthia and Larry Murphy (emotional Christiane Noll and powerful Aaron Lazar) embody a tragic, self-absorbed couple.

Evan is catapulted from poverty into the warm embrace of the wealthy and seemingly secure Murphy’s—also the parents of his crush Zoe (empathetic Maggie McKenna). Like Pip in Great Expectations, Evan is plucked from poverty and obscurity into the midst of money. Evan becomes arrogant and self-absorbed as he revels in the Murphy’s attentions–and what looks like the entire internet.

Phoebe Koyabe excels as Alana, the super-focused A student, who grabs the chance to log in another extra-curricular activity.  Touchingly, Alana wants to help others who feel invisible, like her. Comedic Jared Goldsmith makes the egotistical role of Jared Kleinman, Evan’s family-friend, delightfully all his own.

The show stopping anthem, “You Will Be Found,” exclaims that “no one deserves to be forgotten,” a pretty, hashtag-able motto. Yes, you will be found, even lying alone at the foot of a tree–waiting.

When Jessica Phillips sings “Good for You,” as Heidi Hansen, she brings forth the pain of the rejected working Mom. Heidi enters the rarefied realm of working mothers immortalized for their sacrifices to an unfair system. Where’s free college, now?

Despite its thin plot, “Dear Evan Hansen” makes insightful, biting commentary on the starkly unequal world we live in. The beautiful final scene moves us to feeling about the great Dickensian inequality that has distorted our lives.

“Dear Evan Hansen” –based on the book by Steven Levenson, music and lyrics by Benj Pasek and Justin Paul, directed by Michael Greif, at The Curran, San Francisco, through Sunday, December 30, 2018. Info:  sfcurran.com