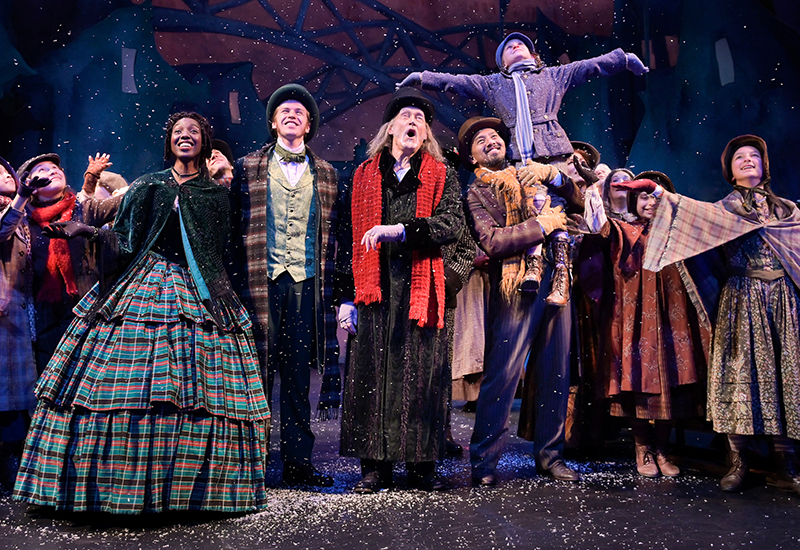 A Christmas Carol is everyone’s favorite holiday tradition. Charles Dickens’ classic Christmas tale applies to any time of year. Dickens may have been writing about Victorian England, but his story of poverty and suffering exists outside the Geary Theater, today, too.

Brilliantly directed by Dominique Lozano, “A Christmas Carol: A Ghost Story of Christmas” achieves new heights of spectacle and meaning in this year’s inspiring ACT reincarnation.

Concerned with only himself and his own wealth, miserly Ebenezer Scrooge (mesmerizing James Carpenter) unwittingly forges selfish links in a chain that will bind him after death. In his dreams, the ghost of his dead law partner Jacob Marley (impressive Ken Ruta) now haunts him, weighted down by Marley’s self-made iron chains.

Scrooge—even his name casts a shadow of doom—has yet to learn from the eloquent Ghost of Christmas Past (lovely Belle Aykroyd) that “the very notion of bounty is a miracle.” He berates and abuses his humble and sympathetic clerk Bob Cratchit (subtle, sweet Jomar Tagatac). Scrooge refuses to share his abundant wealth with the poor and destitute, claiming: “I can’t afford to make idle people merry.”

At home, he mistreats his hard-working housekeeper, Mrs. Dilber (comedic Sharon Lockwood).  When Mrs. Dilber suggests lighting up some candles, he exclaims: “Darkness is cheap. I like it!”

Carpenter’s Scrooge strikingly transforms himself from the penny-pinching curmudgeon to giddy gift-giver. Carpenter smoothly embodies Scrooge’s cantankerous demeanor, but by the end his gleeful excitement is just as convincing.  No wonder Carpenter has been bringing this role to thrilling life for the past 12 years!

The Ghost of Christmas Present (cheery Catherine Castellanos) delights us with her laughter. Swaths of velvety forest green fabric and glittering make-up complete her personified vision of Christmas in the Present Tense.

The spectacular Ghost of Christmas Future unfolds its multi-actor persona to reveal a scene of greed. Greed is quickly brushed away to reveal a scene of grief. Then, all those visions are soon swallowed up in darkness. The startling visions make up one of the most amazing and unnerving renditions of the Future I have encountered.

All the brilliant actors and the surprising, magnificent sets make each scene a wonder. We feel the miserable starkness and damp cold of Scrooge’s bed chamber. But the warmth and merriment of the Fezziwigs’ festive warehouse carry the day.

ACT’s “A Christmas Carol” is the definition of perfection. A timely antidote to a world full of selfies.