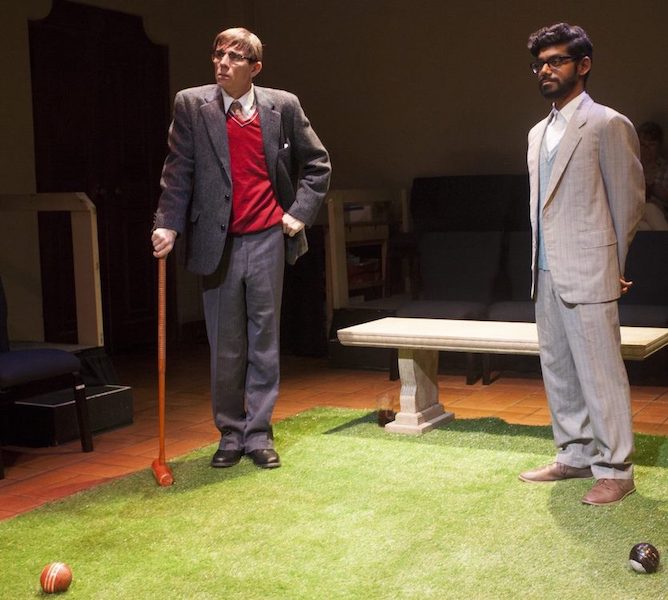 Listen closely and you can hear the rumble of Stephen Hawking’s Big Bang working its way through the universe. In the last hours before New Year’s 1963, three young friends play croquet and illuminate the secrets of Time and Space. The superb Alan Coyne creates a fascinating, hypnotic young Hawking, amazing us with detail and finesse.

It’s an intimate play with big questions on the green turf of a garden in Saint Albans, a suburb of London. Hawking is still a sly, shy grad student at Cambridge, studying Physics and Cosmology. His good friend Jayant Narlikar (charming, eloquent Tirumari Jothi) studies the opposite, the microscopic world of Particle Physics. Hawking’s Big Bang and Narlikar’s Momentary Matter echo each other, delightfully.

The two friends share time and space, and they shred it, too.  As they call Time itself into question, we are intrigued—and wish their Platonic dialogue would move along faster. It’s an intricate ballet, choreographed subtly by writer and director Bruce Coughran, with his three enticing actors.

In that garden, clever Jane Wilde (confident Adrian Deane), a down to earth girl studying Spanish poetry at a less rarefied University, meets Stephen, her future husband. The atmosphere changes bit by bit. The two young guys spin their Einstein theories like courting peacocks. She is their sun, provoking brilliant explanations of the universe—the beginning, operations, and future. I wonder how long the real Jane would stand for their mansplaining?

Jane responds with an elegant poem in Spanish by Borges, called “Inscription on Any Tomb.” Her Borges casts their theories adrift in life and death, space and time. Slowly, she out-Nerds them.

“Hawking” becomes an elegant, engaging Platonic dialogue between witty students holding opposing views. Ironically, the most dramatic challenge comes from Jane, who has been watching Stephen since they were schoolkids. She bravely takes on his arrogance, shyness, and eccentricities in Bruce Coughran’s celebration of Super-Nerd doubt and self-satisfaction.

Stephen and Jane barely know each other but that changes in the course of the 100 minutes of the play. I dream of an intermission, so we can absorb the two guys’ heavy duty explanations. An interval could let us get to know them after down a few more sips of champagne.

Coughran offers us Hawking long before he became the world famous explorer of the Big Bang Theory. With precise and delicate stage movement, Coughran shows us how imagination operates in science and poetry. They dance together, in cosmological harmony.

In “A Time for Hawking,” Coughran rises to lyrical heights of physics and language—invoking mystical Indian parables to evoke the motions of planets and stars. From a male-driven game of croquet to a slowly, unfolding explanation of Einstein’s theories, the intimate three person scene opens up our imaginations, too.

With all the British starchiness and dry wit they can muster, the friends crack that croquet ball back and forth—delving into the origin of the universe, the jiggling of planets, and the birth of Black Holes. Jane captures the attention of the wordy physicists, drawing the prickly Hawking into her Time and Space. Relativity reigns.

Narlikar tells us that in India, the gods and imagination inhabit their everyday life—not kept separate from daily encounters. He tells a marvelous story of the god Vishna who lives among us, disguised. Coughran’s play brings Hawking’s imagination into our daily life. With infinite patience and particular pauses, Jane slowly weaves their theories into thrilling feelings of compassion and love.