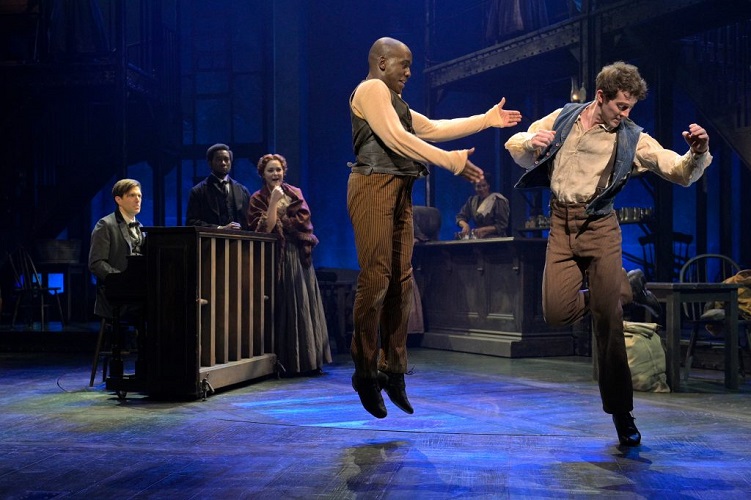 It’s rare to witness a momentous new musical.  My shoulders clench and my jaw drops, like a dumb-struck child. That’s me watching “Paradise Square: A New Musical” that tells the history of Black and Irish people living together in Manhattan—just before the Civil War.

“Paradise Square” explores the little-known history of New York’s Five Points neighborhood through the eyes and music of Stephen Foster (touching Jacob Fishel), the father of American popular music. Foster is the soul of the show, and Fishel’s emotional “Beautiful Dreamer” brought tears to my eyes.

The sheer scale of this production astounds us. It’s BIG. Three-story tenements rise above a rotating stage, with music and movement everywhere. The cast is the largest in Berkeley Rep’s history, and each performer shines. Stalwart Annie O’Brien (lyrical Madeline Trumble) moves us with her emotional “Was My Brother in the Battle.”

“Paradise Square” accumulates strength from the spellbinding history of race, class, and slavery. The story’s impact, multiplied by waves of talent, awakens us to the hidden human drama.

Five-Points is home to free Blacks and Irish immigrants, workers at the bottom of Manhattan life. As friends and family, Black and Irish folks work together to make the most of their exploited, slum life at the Five Points. Black and Irish neighbors celebrate life with inter-racial marriages and friendships in the local saloon. Five Points represents the pre-Civil War U.S. Melting Pot.

Despite their harmony, outside forces—Bowery Strikes, slave hunters, and the Draft—separate families and friends. Lincoln’s unequal Draft drives a racial and economic wedge—immigrants can serve in the Army, but Blacks are banned. And a rich man can buy his way out of the Union Army for $300.

As usual, bosses pit the people against each other, destroying their comradeship. In the midst of strikes and rebellion, the intrepid Christina Sajous sings the powerful, final anthem, “Let It Burn,” and we are shocked.  We realize how fragile are the pillars of our democracy. How can we resist the forces of division and re-recreate the utopia of Five Points? “Paradise Square” shows us the way.