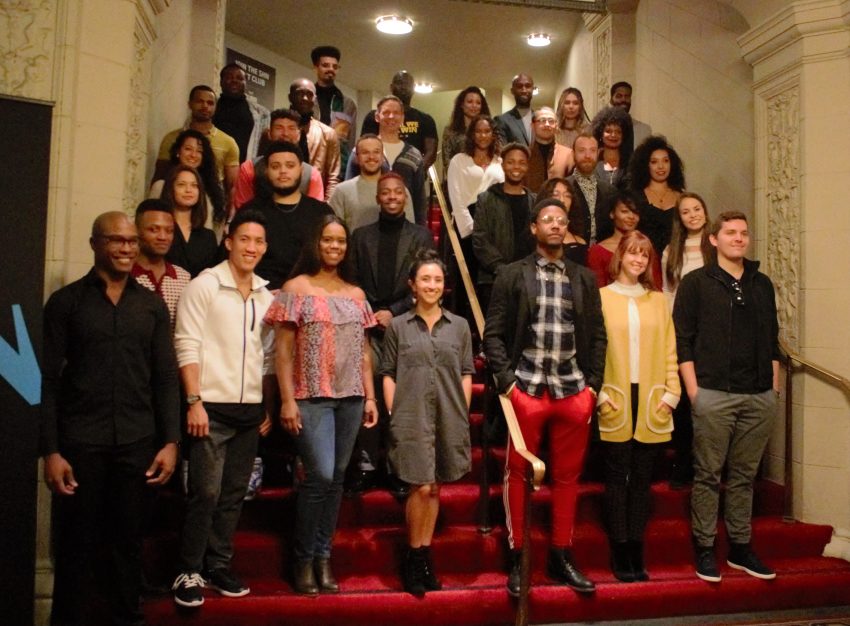 Fresh from performing with Lin-Manuel Miranda, writer and creator of “Hamilton,” for three weeks in Puerto Rico, the Third National Tour cast has begun playing in San Francisco. This cast, called “And Peggy,” shared the joy of doing “Hamilton” with Lin-Manuel Miranda playing the role he originated at The Public Theater and on Broadway.

Now, they bring their joy and their experience to the Orpheum Theater on Market Street. And what a wonderfully professional, experienced, and exciting group of young actors, singers, and dancers they are. Theatrius had the chance to meet, photograph, and interview five of the key players, and here they are—for your pleasure.

These five superb actors are excited to be here until October. They come from all over the country–from New York, Chicago, L.A., and these talented young actors have performed in big shows like “Motown,” “The Scottsboro Boys,” and “Hairspray.” They’ve been on TV series, but above all they are pro’s who know what they’re doing.

They have been trained by “Hamilton” veterans—from Lin-Manuel, himself, to Director Thomas Kail, and Andy Blankenbuehler, the incredible choreographer—all Tony Award winners.

These super-prepared performers have all read the Ron Chernow’s biography that inspired “Hamilton.” These worldly and sophisticated young actors were “In the room where it happened,” bet on that. Now, they are bringing the Hamilton magic to S.F., again. 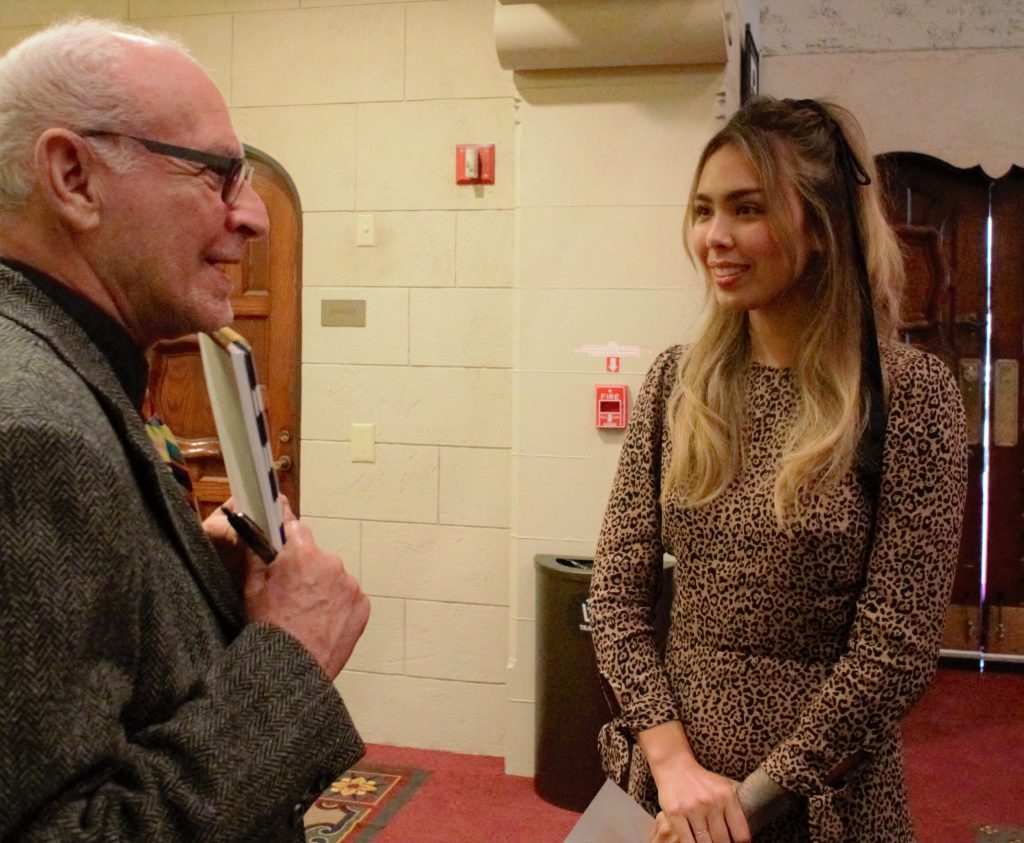 Julia plays Eliza Hamilton, Alexander Hamilton’s wife, and ends the show’s arc by continuing his legacy. She tells us that working with Lin-Manuel in Puerto Rico made each performance like a rock concert. The people were leaping out of their seats, screaming! A once in a lifetime thrill.

Julia explains that the multi-cultural casting—of Black, Latinx, and Asian performers—lets kids in the audience see “themselves” on stage, now and for the future. Kids have role models, now, with people of color playing historical white founders of America. She says that the diverse casting brings U.S. history and hope to kids who formerly couldn’t imagine themselves onstage, or part of history.

In fact, The EduHams, a new program that bring kids from local high schools into the theater for special performances is making a difference right now, right here. The kids get in as part of their school classes. 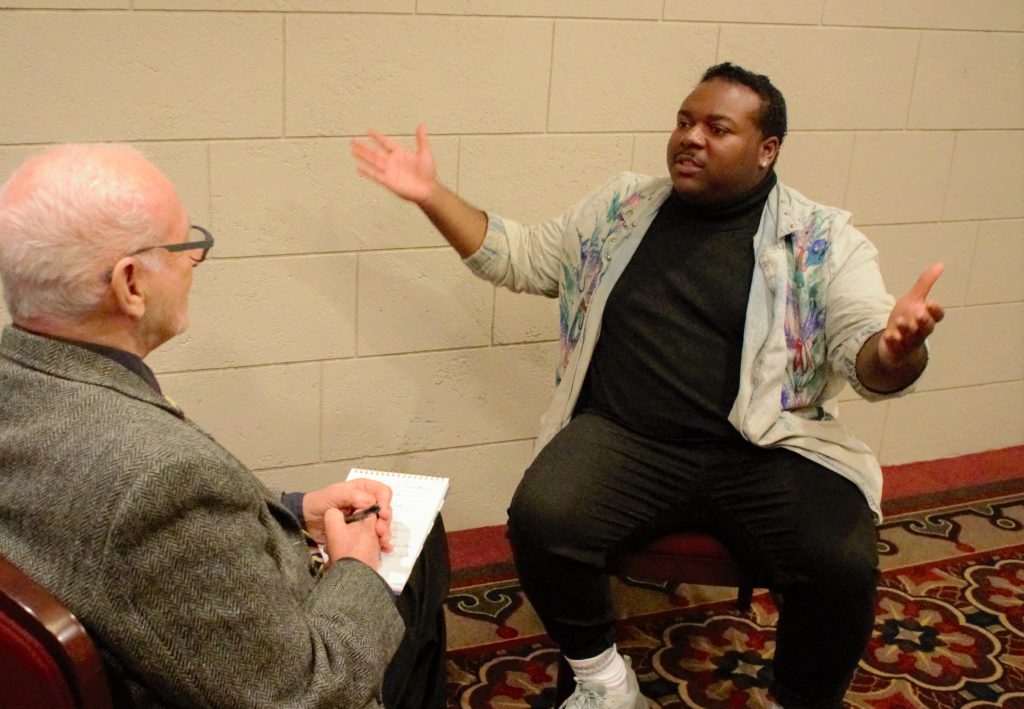 Brandon plays Hercules Mulligan and James Madison in the “And Peggy” cast. Brandon is the grand-nephew of the great jazz singer and trumpeter Louis Armstrong. He says that the material in “Hamilton” is so dense, there’s so much in the text, as well as in Ron Chernow’s book, Hamilton.

Brandon say that looking into Lin-Manuel’s eyes while performing together in Puerto Rico inspired him. He learned so much playing across from Lin. Brandon worked with the creative team in L.A., and played in “Ragtime” in Orange County. He salutes all the visionary artists behind the scenes “that keep this show mad lit.” 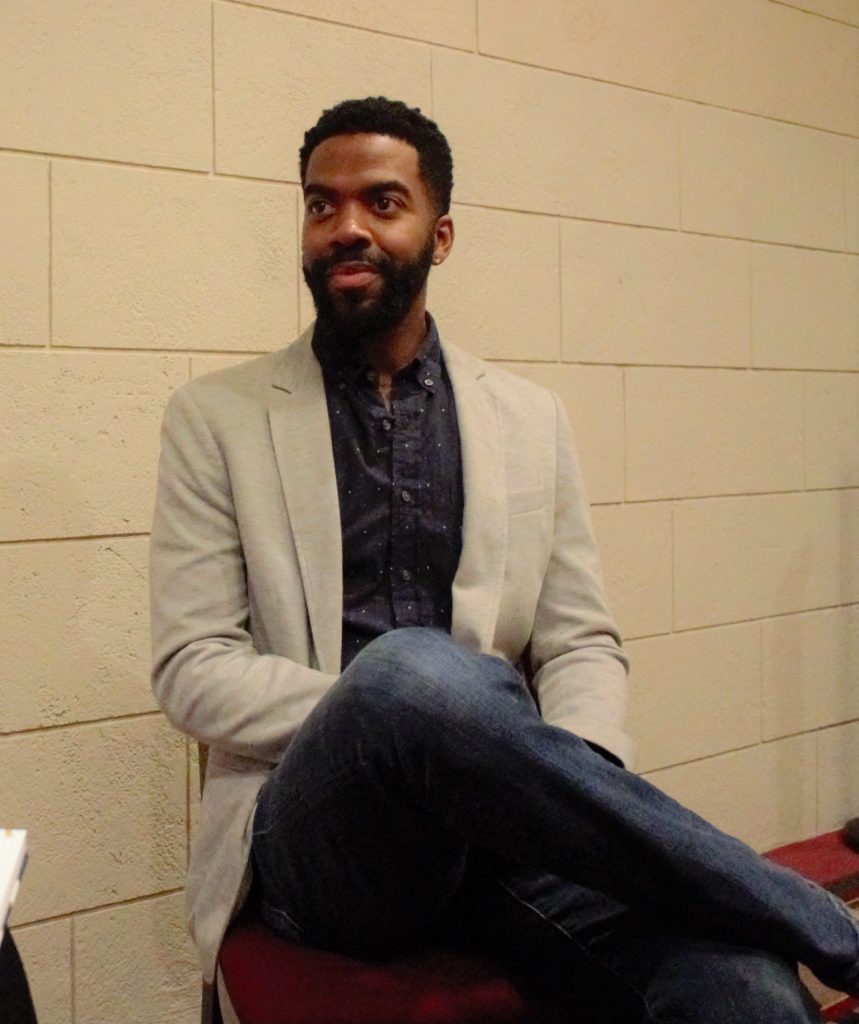 Julius plays Alexander Hamilton, and is an NAACP Theater Award nominee from Gary, Indiana. He has been quite a few TV series and multiple Broadway tours, including “Motown: The Musical,” “Catch Me If You Can,” and “Hairspray.” We shared stories of going to Northwestern University and he told me about playing in the moving and emotional “Scottsboro Boys.”

Julius is sharp, funny, and charming. During the three week run in Puerto Rico, Lin-Manuel played his role of Hamilton; so Julius jokes: “I could be found lolling on the beach because Lin-Manuel was doing all the work.”  Truthfully,  he says that, of course, he learned tremendously from watching and working with Lin, who helped him create his own Hamilton. It’s a meaty role and he had to learn every trick in the bag.

Julius also says: “Representation matters on the stage. Representation is important for all racial groups.” He loves the song “It’s Quiet Uptown,” a beautiful song, where Hamilton mourns the death of his son, Phillip. At that point, he explains, Hamilton starts to rebuild his bond with Eliza, his wife. Hamilton doesn’t know what to do next. 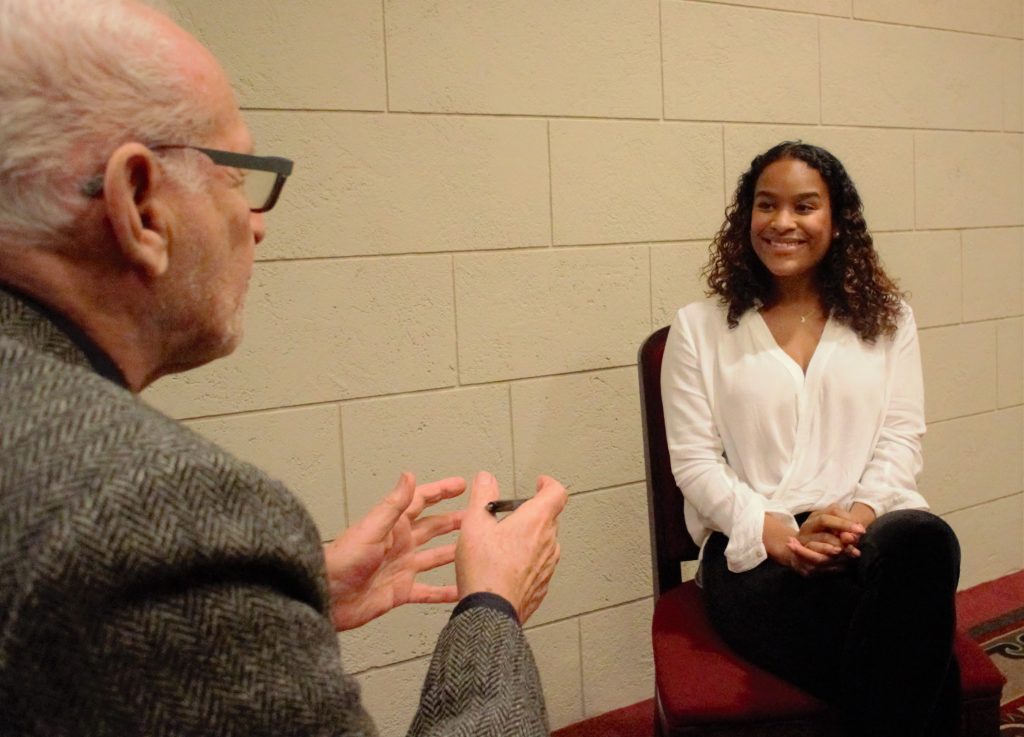 Darilyn plays Peggy Schulyer and then later, Maria Reynolds, who had an affair with Alexander. The two roles have opposite sexual meaning in the show, so “Diversity Matters.” Darilyn has been in “The Lion King,” “The Taming of the Shrew,” and TV shows, like “Boardwalk Empire.”

She is Dominican, from the Bronx and Rockland County, New York, so she’s used to shuttling back and forth between her mother’s house upstate and her father’s in The Bronx. She got city and country experience growing up, a great help in inhabiting opposing roles.

Darilyn went to CCNY in Harlem, where Hamilton lived. You can still visit his house there, in Harlem—it’s a wonderful landmark home. She loves “In the Heights,” which she played in and delights in families who come to the show and get educated about the U.S., putting diverse representation in the forefront. 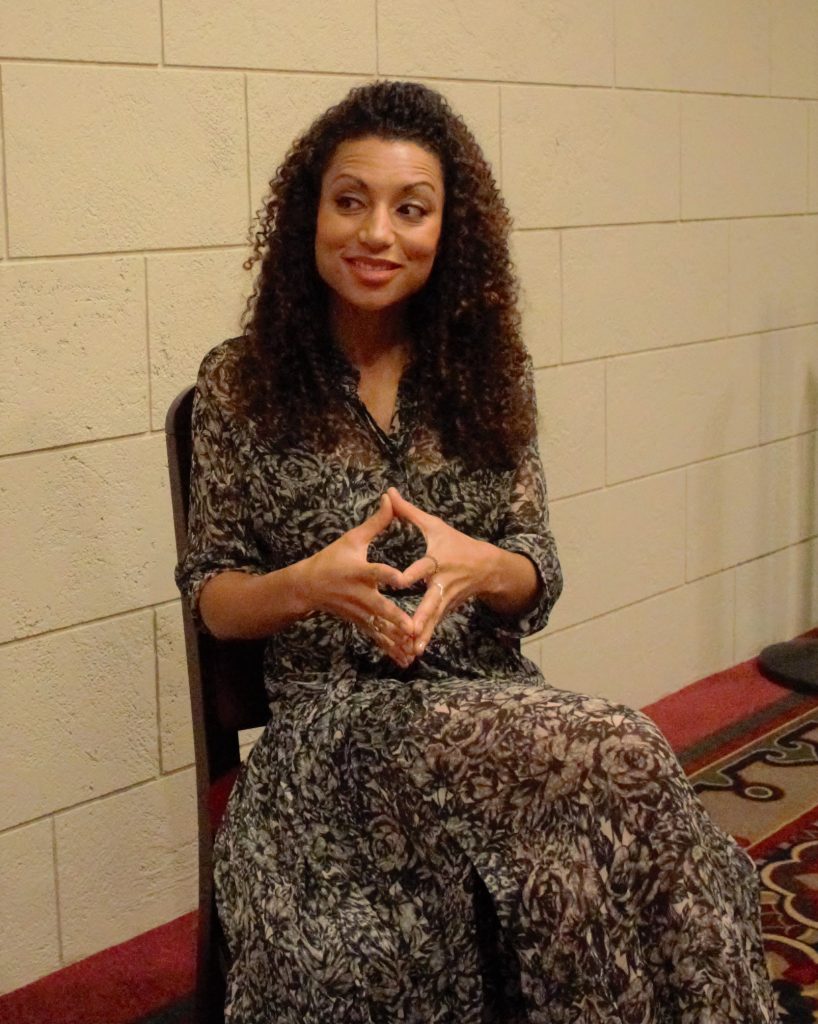 Sabrina Sloan plays Angelica Schuyler, the eldest of the three sisters, and Angelica introduces Alexander to her sister, Eliza. Sabrina explains to us that the actual Angelica wrote to Jefferson and had debates with him often. Angelica was accepted as an intellectual and a powerful woman in the Revolutionary era.

Like Angelica, Sabrina is a forward-thinking woman, and she is enjoying showing her two kids around San Francisco. She went to Northwestern, in Evanston, Illinois, and then played in in “Motown,” as understudy to Diana Ross. She has also played in Catch Me If You Can, Hairspray, In the Heights, as well as TV shows: Blindspot, The Mysteries of Laura, and Bost Legal. She has also been in previous Hamilton tours.

Sabrina, a worldly and charming woman, represents family loyalty in “Hamilton.” Her Angelica sees people as equals, treating all others democratically. Sabrina enjoys playing a woman who breaks new ground in “Hamilton.” Sabrina is our modern-day Angelica.