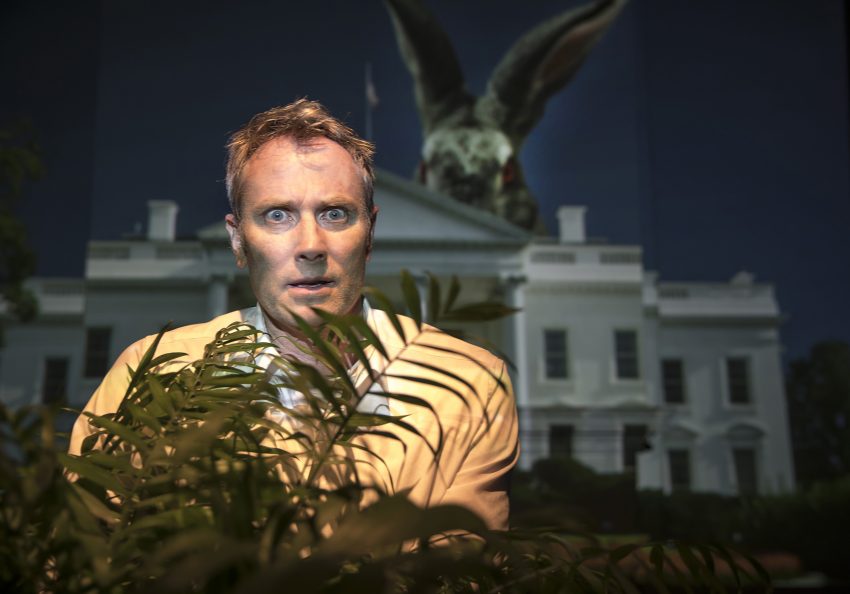 What happens when Franz Kafka meets Lewis Carroll, and “Why is a raven like a writing desk?” Like the Mad Hatter’s infamous riddle, “Wonderland” doesn’t necessarily have an answer. Instead, Central Works’ experimental production gets tangled in moral ambiguity.

“Wonderland” shows its strength in its superb staging. The cozy Victorian parlor is likely smaller than your living room. We physically feel the rising tension, only feet from the action.

Confused bank teller Joseph Kaye (eccentric John Patrick Moore) stands alone in a small room,  disheveled and bewildered. With a large portrait of George Washington looming ominously over him, Joseph Kaye has no idea why he has been smuggled into the White House. We are right in the midst of Kafka’s chilling The Trial, the great political satire of an innocent citizen facing unknown forces. He can’t seem to get a straight answer from anyone.

People dart in and out of the room, each with a code name inspired by characters in Alice in Wonderland. Each interaction between Kaye and these mysterious officials slowly unravels a conspiracy at the center of the action.

An apprehensive White House intern, called  “A” (intriguing Martha Brigham) questions the morality of her superiors. She thinks she is being asked to commit murder. As her loyalties waver, we root for her to break away from the oppressive bureaucrats.

Mysterious operative “Duchess” (compelling Kimberly Ridgeway) dominates the room when she enters. Duchess strips Kaye down to his core, exposing his most intimate dreams. Ridgeway has fun playing Duchess, withering her opponents with a glance.

Foul-mouthed retired general “Rabbit” (grandiose Clive Worsley) has no patience for questions. Rabbit takes pleasure in the gruesome, gleefully describing his record high kill count in Vietnam.  He bullies A and Kaye equally, constantly screaming at them to shut up. Worsley brings a frenzy to the role, having a blast by constantly inciting chaos.

Unfortunately, both the script and director Jan Zvaifler diminish the role of Joseph Kaye. As Kaye, Moore has little to do other than frantically exclaim, “What’s going on here?” and “Who are you?” Even though Joseph Kaye stays onstage the entire show, often he just hovers feebly in the background while Duchess and explosive Rabbit argue.

Amusing in themselves, the absurd bureaucrats fail to connect us to the elusive plot in which the characters are embroiled. The longer we, like Joseph Kaye, are left in the dark, the more the excitement begins to fizzle. Here, Gary Graves’ new play begins to struggle; even at a brisk 80 minutes, “Wonderland” suffers from the unexplained mystery at its center.

“Wonderland” reminds me of a frustrating current trend in TV, plays, and movies where vagueness equals cleverness, like Westworld or Lost. At times, we feel completely in the dark because we don’t understand each tiny clue; other times we are forced to dissect the plot on internet forums.

While Kafka’s satire can undermine government, and Carroll’s explores the individual fantasy, the two just don’t mix. Gary Graves’ attempt to bring two iconic novels to the stage crowds out their possible contemporary bite. To its credit, Central Works wades bravely into these waters with “Wonderland” but struggles to stay afloat.