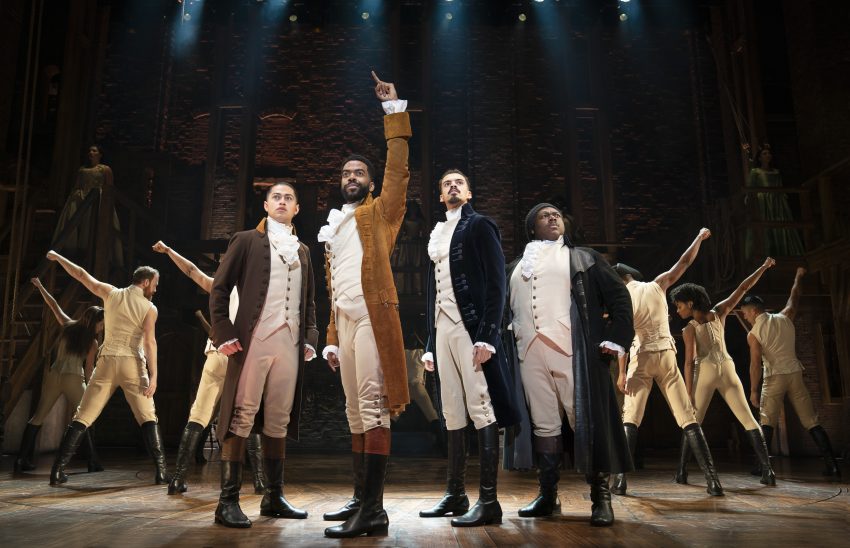 Lin-Manuel Miranda’s work of great genius, “Hamilton,” has already transcended its time and place and ascended to legend—in just five years. And the exquisite ensemble, made up of Black, Latinx, Asian, and White off-spring, tell the story with startling dances and moves.

The thrilling American story of “Hamilton” shows us the results of the Revolution: The descendants of slaves and immigrants, in color-blind casting, actually embody the Founding Fathers and Mothers. That’s how slavery and freedom are ‘represented’ in this once-in-a lifetime show—by including actors, singers, and dancers of all colors and classes—whose ancestors were oppressed and disenfranchised for decades. There they are–onstage.

Descendants of slaves, immigrants, and freemen combine to make the U.S. tapestry. Tonight, the dispossessed are represented by these irresistible singers, dancers, and actors—operating in perfect harmony. Miranda’s “Hamilton” will be around for many decades. His Hamilton, like Hamlet, persists because he is never satisfied.

Composer and writer Lin-Manuel Miranda’s parents, of Puerto Rican origin, raised their son in Washington Heights, New York City. Miranda’s musicals are all-inclusive and speak to Americans of all origins. Hamilton, the man, a Caribbean immigrant, rose from outsider to revolutionary to Washington’s right-hand man.

Even marvelously spoiled King George III (snarky Rick Negron) comically condescends, as the audience howls with laughter at his ditty, “You’ll Be Back.” The King insists that we’ll all “come crawling back,” but we know better.

“Hamilton” has changed the game. We can bask in the pounding beats that tell history and herstory: “I am not throwing away my shot”; “The room where it happens”; and “Washington on your side!”  Each song fits the character and the dance that surround it. I won’t forget: “History has its eyes on you”; “One last time”; or “Look around.” “Hamilton overflows with memorable lyrics, like “Immigrants get the job done!”

Now, let’s talk about the Founding Mothers, who perform with passion and wit in Miranda’s New World. The three wealthy Schuyler sisters shape and inspire Hamilton, the man and the show. Intellectual and creative Angelica Schulyer (elegant, soaring Sabrina Sloan) guides Hamilton, debates Jefferson, and has ideas to spare. Sloan creates a marvelously hypnotic Angelica for the ages.

Her sister Eliza (warm, wise Julia K. Harriman) marries Alexander, bringing him love and a son. Eliza survives him by 50 years and creates his legacy—the first orphanage and a college–to perpetuate his ideas and their life. Listen for Eliza’s compassion, in Harriman’s voice, as she re-fashions history.

Each role represents a whole story, each performer is a new star in the U.S. firmament. They represent.

The great genius of “Hamilton” turns the world upside down” in San Francisco, every night. It’s a show by, for, and about Everyone.