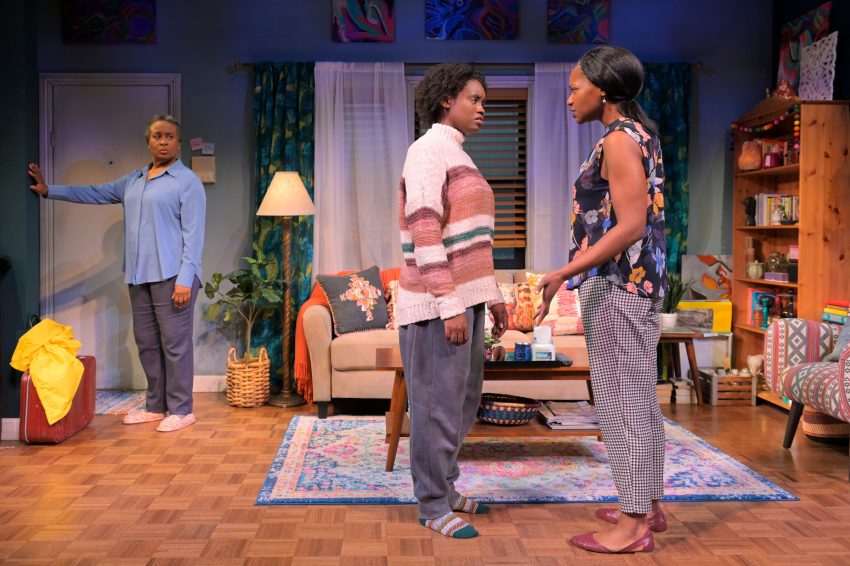 When the comfy little New York apartment rolled out toward me, I was surprised by familiar, softly-woven cushions and wooden cabinets in the working kitchen. It’s like coming home. The cozy little apartment lulls us into expecting warm family welcomes. But a new arrival from Nigeria gets only shocking strangeness.

Fresh off the plane from Nigeria, wary Iniabasi (intriguing, edgy Eunice Woods) cannot recognize her half-sister Adiaha (inspiring, stalwart Aneisa Hicks). Shivering and disoriented, Iniabasi is dressed in summer clothes for a harsh New York winter. In an hilarious telephone scene at JFK, she lands in an alien world. Iniabasi has not seen her sister or mother since she was eight years old. As a grown woman, she feels abandoned, the victim of many lies. We sympathize with her, confronting her insistent sister.

Her plight is both comical and touching: she refuses the Nigerian food that sister Adiaha whips up out of Jiffy Pancake Mix. She says, “I didn’t come all this way to eat that!” She rejects the best efforts to calm her down.

Sister Adiaha, clad in warm sweater and winter coat, tries to make Iniabasi comfortable, but she’s not having it. We are drawn into the mystery of three noble women: a mother with daughters from two continents, trying to find their way back to each other.

Aneisa Hicks as the American sister runs away with my heart—she has secrets, she has pain, but she also has a wide, endearing smile, non-stop jokes, and the warmest heart ever. I love to watch her whip batter and glare at her sister: Aneisa Hicks creates the strong, loving sister we all want.

The complex family drama detours when, alone onstage, a regretful mother opens the suitcase, the “portmanteau.” Her daughter’s battered, old leather suitcase provokes a moving scene of nearly silent discovery.  But the scene goes on too long, despite the actor’s brilliant range. It could be a good spot to bring on an intermission—and then return with renewed memories.

We would love more time with these wonderful Nigerian American women, to delve into their journeys: they are delightful, fresh characters. Playwright Udofia, sparkling at the opening, will bring us more in her nine-part Ufot family cycle.

Even repressed Iniabasi could use more time to grow and react to her Mom and Sister. We want more of her changes from malcontent adult to needy child. There’s an awful lot stuffed in that suitccase. We want to travel with these three regal, resiliant ladies. Great performances, design, and direction promise a continuing epic trip.

All photos by Kevin Berne