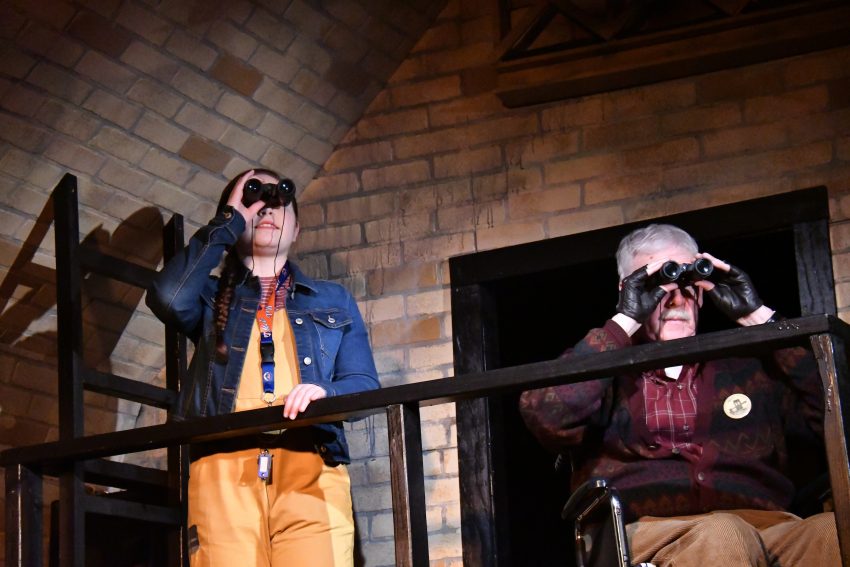 Melissa James Gibson’s heart-warming “Brooklyn Bridge” illustrates the beauty of a diverse community. Strangers in an apartment complex help a Russian girl Sasha (clever Emma Curtin) finish her report about the near-by Brooklyn Bridge. Along the way, she becomes true friends with them and not just friendly neighbors.

Scenic designer Liliana Duque Piñeiro surrounds us with a massive apartment floor. Standard doors and tacky brass knobs reveal signs of an ill-maintained building. We see a busted elevator with buttons that don’t light up, and cracked, concrete stairs.

From amazing realistic fire escape with black, steel railings, Sasha can see her beloved Brooklyn Bridge. Below, an unknown singer (melodic Mikah Kavita) sits at a café table working on her songs. Surrounded by flowers and red brick walls, occasionally she graces us with her soothing voice.

In the hallway, two shadowy figures (enigmatic Alma Pasic-Tran and Gilberto Polanco) mysteriously fight over the location of potted plant, which they repeatedly move back and forth. It’s completely absurd, but incredibly funny.

Her oldest neighbor, wheelchair bound John (compassionate Tom Reilly) offers Sasha his encyclopedic knowledge of the Bridge. He treats her affectionately, like a father. As Sasha, Curtin displays great timing and skill. She shines brightly with her charming, snappy comebacks and angry-out bursts.

An upstairs neighbor, frenzied businesswoman Trudi (convincing Sheila Devitt) is obsessed with time. Trudi wears watches on her ankles, her wrist, and even in her hair. Behaving like an outlandish auntie, Trudi gives Sasha prudent advice, sarcastically, just like a real New Yorker!

A Puerto Rican mother with many kids, Talidia (sassy Leticia Duarte), shares a caring moment with Sasha when they are both locked out of the building. Talidia touches us, as she takes a mother’s role in the community. She displays care and understanding with a no-nonsense attitude.

Town Hall Theatre’s “Brooklyn Bridge” offers wholesome, hilarious entertainment for everyone. With comedy, wit and wisdom, “Bridge” connects a child with a loving family. Each character reminds me of a family relationship: Sam the older brother, John the grandpa, Trudi the aunt, and Talidia the mother. What a pleasure to watch this talented cast become a family.