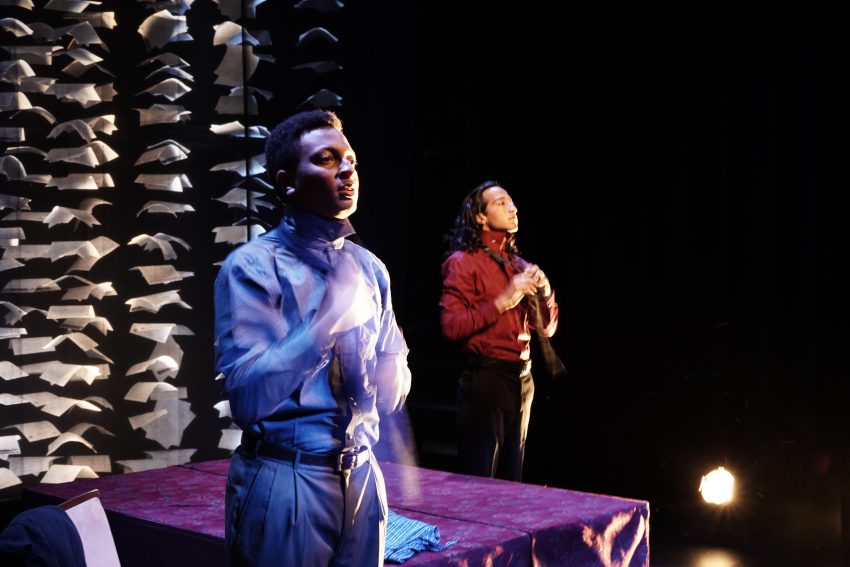 “Transfers” by Lucy Thurber plunges us into the world of college admissions where an ‘elite’ private school struggles to include students from the inner city. At the frontline of the equality wars, funny and flawed educators decide who gets in and who is rejected.

Thurber dials in college admissions interviews to show that injuries go far beyond the question of acceptance.

“Transfers” opens in a motel room the night before admissions interviews at a private Northeastern college. Two “diversity candidates” are oddly forced to share a room with an anxious counselor. Director Ken Savage highlights a solitary bed in the tightly controlled scene, as rich dialogue flows between the three gifted actors. But something’s gone wrong with their welcome. Scenic Designer Kate Boyd has brilliantly built a surreal wall full of floating college files as background.

Counselor David DeSantos (excitable David Everett Moore) greets the two New York City high schoolers, “repping” them to the college. Moore’s DeSantos has too much misplaced nervous energy, but we ride along with the scenario. The two boys—both from the South Bronx—are all too familiar with each other’s troubled past. The high stakes and their awkward confrontation are particularly ill-timed.

Sensitive Clarence Mathews (beautifully delicate Victor D. Ragsdale), a well-read, polite boy, is anxious about tomorrow’s interview. He feels he belongs at the College, but he knows he has to “sell” his particular brand of under-privilege. The other boy, Bronx wrestling star Christofer Rodriguez (intense, powerful Caleb Cabrera) is abrasive and hot-headed; Christofer angrily refuses to turn his story into a commodity.

DeSantos, their nervous advisor, makes the boys explore their pasts to deliver predictable  cookie-cutter stories, but their authenticity still grabs our attention.

Clarence is joined by emotional, but pretentious Professor Geoffrey Dean, (tender Michael Wayne Rice). Clarence and Geoffrey instantly bond over a warm, heady discussion of Russian writers and the intellectual life. Teacher and student share their stories in a touching conversation, and we love it that Clarence’s luck is turning.

Suddenly, we plunge into the heart of the dilemma: Who will get the scholarship—the sensitive, intellectual boy, or the crude, honest boy?

When the hilarious, combative admissions committee meets, Thurber showcases the arbitrary nature of the college admissions process. She reveals the continued victimization of these kids. Sure, they are under-privileged and under-served, each with his own heartbreaking story. But in its desire to build inclusion, is the College exploiting young people by asking them to reduce their experiences into “pre-packaged stories”? Is pathos required to get them a seat at the table?

Their resilience and ingenuity got them there—isn’t that enough? “Transfer” is a gripping, poignant comedy that asks: How is diversity truly valued? “Transfers” is a Must See!