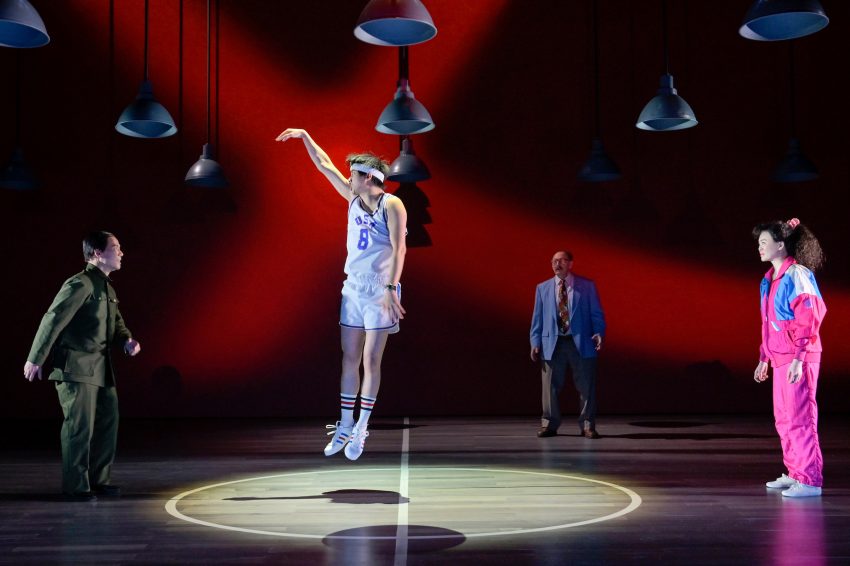 ACT pulls off a brilliant trick with “The Great Leap.” We might go for Tony award-winning actor BD Wong, but we stay for playwright Lauren Yee who dominates the center-court.

“The Great Leap” combines Chinatown, Beijing, and basketball. Yee artfully melds personal and political, family and fandom for a thrilling match of tangled emotions, laughter, and tears. The young Chinatown high school star Manford Lum (gallant Tim Liu) has lost his mom and is searching for a long-lost father.

Yee positions this mantra as the driving conflict: refusing to back off the court vs. standing on the sideline. She brilliantly weaves in the U.S.-China cultural clash, applying it to love, family, and sports.

Although the first act goes slow and steady, Act Two bursts with heart-racing tension and drama. The projections and slides take us to Beijing in 1989, where USF is playing one game with Wen Chang’s team—who are tall as “tall trees.”

Wen Chang has moved from translator to Commissar of Sport. He has taken the American’s advice to hilarious effect. “Let’s see some hustle!” becomes “Move fast, like you’re picking up pages of the Little Red Book!” “Great Leap” zooms in on the juxtaposition of the foul-mouthed American and the patient Chinese functionary.

Their “friendship” evaporates when Saul exclaims: “No Chinese team will ever beat an American team, I promise you.”

“The Great Leap” has us holding our breath, waiting for the final buzzer to know whether Manford and China have broken free. It’s worth your while to find out!