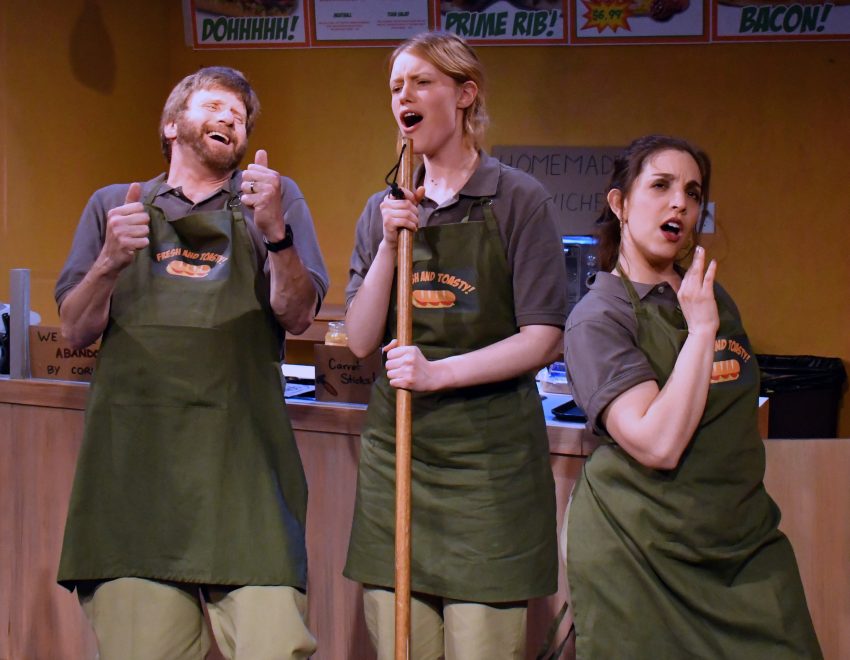 Have you ever walked into a franchise sandwich shop and wondered what’s going on behind the counter? Bess Wohl has the answers for us. She depicts a sorry crew of three minimum wage workers in a delightfully realistic and tacky corporate sandwich shop called “American Hero.”

Bob wants them to make the sandwiches by the corporate book, but the comic crew has trouble keeping up. Chief among them, Jamie (witty Laura Espino) is not pleased to be there, she is facing lean times and has a child to support. Jamie complains bitterly about the ridiculous, demeaning franchise rules. Meanwhile, poor, depressed Sherri (engaging Devon DeGroot) tries her hardest to keep up, but never can. She’s funny and depressed, too.

Eager employee, Ted (sprightly Paul Stout), must make a success of this low paying job because he’s got a wife and kid, and he’s been fired from his last corporate gig. He’s clearly hit the bottom of the barrel. Conformity is his game and he hits our hearts with his silly servility. Stout has us sympathizing with sad sack Ted.

When Bob, the franchisee disappears, and the terrific trio run out of chicken, ham, and bread, they try to get help from corporate headquarters, to no avail. The workers are cast adrift; if they lose these jobs they have nowhere to go. When Sherri has the bright idea of making her own homemade tuna sandwiches, the workers reluctantly revolt. The three oppressed workers form a virtual co-op, dissing their cold corporate overlords.

Tune in and find out how their little Workers Co-op thrives and survives–for a while. They confront Trumpean capitalism with individual brilliance, wit, and genius. It’s a hilarious ride from meaningless corporate rules to smart worker ingenuity. The actors nail it with comic precision. We want to be there and take a bite out of today’s Bernie Sanders Special! A short walk to Custom Made Theatre reveals the true American Hero.