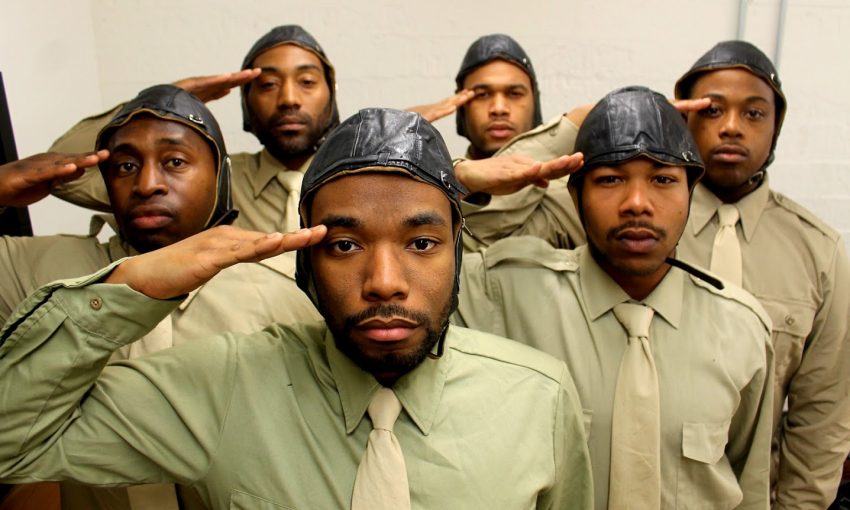 “Black Eagles” opens at a 90s reception honoring General Colin Powell, attended by three surviving WWII Black fighter pilots. As the veterans retell their war stories, they chide each other about how their stories have grown in 50 years. “Black Eagles” reveals the little-known history of the Tuskegee Airmen.

Their remarkable achievements need no embellishment. The Black Eagles never lost a bomber they were escorting. Ironically, they received little recognition for their achievements. Glory and medals went to white fighter pilots who became aces by racking up “kills.” But the disciplined Tuskegee Airmen refused to leave their defensive formation to seek personal glory.

Their fear is palpable as they as they fly into the terrible beauty of the flak. We can feel their adrenaline rise as the German fighters attack. Headstrong Othel (stalwart Joseph Pendleton) longs to peel away, to feel the exhilaration of a kill. His fellow pilots demand that he hold formation.

When two white airmen enter the Black barracks, they are greeted with suspicion.  Dave Whitson (ebullient William Robert Caldwell) comments on the Lena Horne record playing, saying that he likes that ‘jazzy’ music. The other white pilot, Roy Truman (high spirited Kyle Goldman) makes a crude attempt to show racial acceptance by not wiping the mouth of a cognac bottle. They brag that the other white pilots are not so accepting.

Playwright Leslie Lee creates sharp contrasts between the death they face in the air and the absurdities of their lives on the ground. On their return from one flight, Roscoe (courageous, sensitive Ron Chapman) expresses his fears of dying to Julius, his ventriloquist dummy.

The airmen’s barrack shenanigans attempt to create levity from their daily flirtations with death.  The squadrons compete over who can dance the best jitterbug as they perform their awesome “jitterbug drill.” They stomp in combat boots while beating out a syncopated rhythm with hand clapping and leg slapping.

Beautiful Pia (compelling Margherita Ventura), who has lost her family from the bombing, clings to outspoken Buddy (rebellious Donald Ray Antoine). Disillusioned by the rejection he finds at home, Buddy longs to stay in Italy.

Like the Tuskegee airmen, we are forced to question the righteousness and justice of every American war. “Black Eagles” recaptures Black History and makes it live.