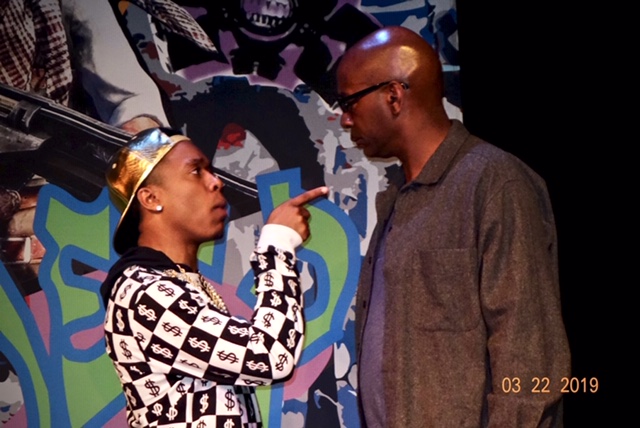 “The Urban Retreat” shows us that Hip Hop is the new slavery. We follow MC Trench Deep, as he goes from a fabricated performer to a vulnerable artist. Thugalicious Hip Hop star Trench Deep thinks he’s finally made it, living up in the hills of Mill Valley. Darryl V. Jones’ stellar cast spits tight rhymes along with traditional dialogue, freeing their voices.

Trench (volatile, passionate Lenard Jackson) looks down the hill to see the high school where Tupac Shakur attended—and believes he has made it. His old high school teacher Chaucer Mosley (powerful Adrian Roberts) believes that Trench has sold out.

Trench Deep flies his teacher out from the streets of South Side Chicago to Cali. As a successful hip hop star, Trench turns the tables—literally. Trench forces Chaucer to sit in a student’s desk, while he sits in a larger teacher’s desk! Despite his long-held resentment, Trench hires Chaucer to ghostwrite his memoir.

Trench’s high energy manager Pooh Butt (mercurial LaKeidrick Wimberly) controls him with prescription pills. Pooh Butt threatens Chaucer when he calls Trench by his “slave name,” Sidney.  Trench is also manipulated by the aggressive, two faced publishing executive Maggie Farmer (versatile, talented Miriam Ani) and stuttering assistant Angie (sassy Emily Kistner). Neither of them is interested in Trench’s artistic growth, instead they capitalize on his trauma from the ‘hood.

As Trench crawls and pounds the floor with neck veins bulging, we see a lifetime of emotional slavery on stage. Chaucer empathizes with him and lets him have his rant.  When we see Trench’s anger morph into desperation, we know we can never understand the anger of a Black man.

Ultimately the play promises hope for a better day.  Trench Deep’s journey from riches to realness reveals the hidden life of Black entertainers in America. “The Urban Retreat” proves that it’s our duty to break the chains of Pop Culture.