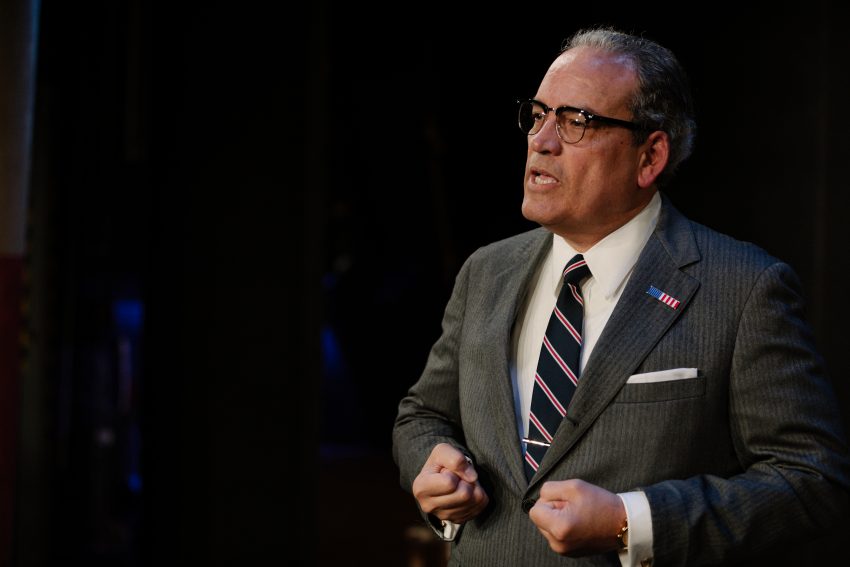 “All the Way” by Robert Schenkkan focuses like a laser on Lyndon Baines Johnson’s first year as President. Schenkkan takes us from the assassination of JFK in November 1963, to Johnson’s ramming the Civil Rights Act through Congress, in 1964. Later that year he would win re-election by a landslide.

Under the sure hand of Director Marilyn Langbehn, “All the Way” does an excellent job showing that flawed humans, like LBJ and Martin Luther King, Jr., can change history.

The manipulative, crude Texan LBJ, played by the incomparable John Hale, is a far cry from the elegant Bostonian JFK. We hardly expect the crass LBJ to become a social justice warrior; yet he keeps working to pass the Civil Rights Bill. Hale evokes LBJ’s painful consternation over crucial decisions during that momentous year. Although Hale displays LBJ’s mean and impulsive side, he also shows him as stalwart and courageous.

Dynamic Khary L. Moye plays Martin Luther King, Jr., the voice of reason, a man nobly dedicated to the Civil Rights Movement. Moye shows us a troubling side of MLK, Jr., as well, as he movingly portrays King’s shortcomings, as well as his strengths.

The Civil Rights Act emerges as the product of imperfect men who differ on tactics. We see the discord between King, Stokely Carmichael (Umi Grant), and Ralph Abernathy (Terrance Smith). While all of them are fighting for equal rights, they disagree on the road ahead. Through them we find out how the Bill finally made its way.

“All the Way” shows the intrigue that is politics. President Johnson maneuvers around the Southern Democrats when they try to crush his Civil Rights bill.  When segregationist Rep. Howard “Judge” Smith (Jay Krohengold) tries to kill the bill by adding a prohibition against sex discrimination, the Bill passes anyway. So, accidentally, sexual equality becomes a part of the great Civil Rights Act. Krohengold’s Smith is brilliant and despicable, illuminating the contradictory aspect in political characters.

These extraordinary actors make even their phone conversations intriguing. Working up a frenzy, LBJ wildly brandishes the phone receiver to emphasize his point. Johnson, the dramatic politician, uses all props at hand to whittle down the opposition—using threats, bribery, and trickery.

The wonderful cast of twenty-one distinct, captivating actors combine their skills to transform ordinary conversation and motion to vivid, transporting dreams. Director Langbehn brings to life nearly three hours of intense emotional debate and inspiration. Her LBJ reminds us what a real politician and idealist can accomplish. “All the Way” keeps us you the edge of your seat—it’s truly an epic drama.

“All the Way” by Robert Schenkkan, directed by Marilyn Langbehn, at Contra Costa Civic Theatre, El Cerrito, California, through Sunday, May 5, 2019. Info: ccct.org