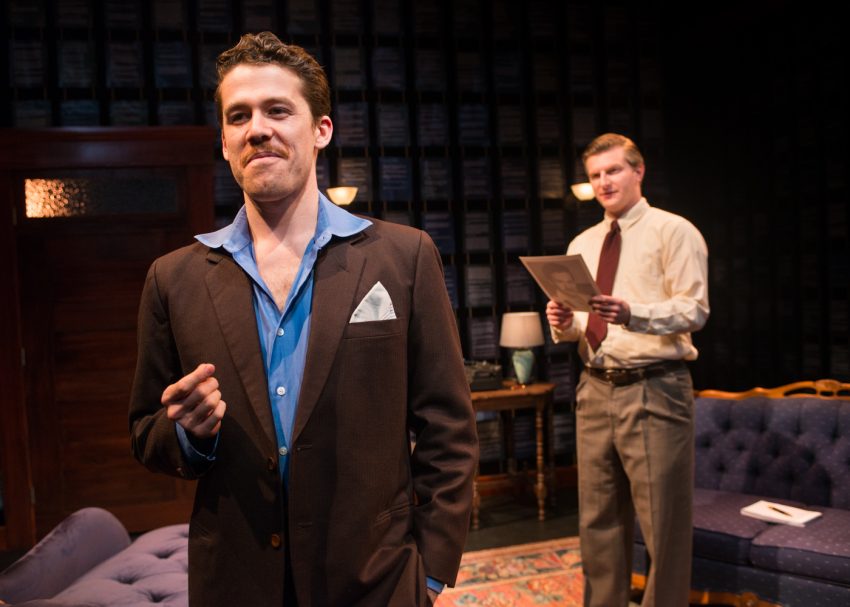 “The Gentleman Caller” is almost too beautiful to write about. It will take a second visit to luxuriate in the wit, depth, and confidence that Philip Dawkins has poured into his delightful play about two famed, gay playwrights of the 50s, Tennessee Williams and William Inge.

Dawkins’ new play “The Gentleman Caller” takes place in November and December of 1944. Tennessee Williams is about to open “The Glass Menagerie” in Chicago—with a new style of personal “memory play” featuring the writer talking to the audience, and presenting his manipulative Southern Belle mother.

Brennan Pickman-Thoon uncannily embodies the quicksilver Southern poet and playwright. He paces the edges of the stage, engaging us in disarming gossip—leaping over time from 1944 to here and now. Pickman-Thoon deliciously confides Williams’ secrets and fears, becoming a ‘live ringer’ for the elusive Tennessee.

With a sly flick of his wrist, Pickman-Thoon introduces himself as the young Tennessee—he’s 33, here. He’s on his way to be interviewed by a young Saint Louis critic, one William Inge. Tennessee could use a good interview to put some wind in his sails. In Act One, the dance between Williams and Inge transforms itself into mesmerizing confrontation and seduction.

In Act Two, in Williams’ hotel room in Chicago, “The Glass Menagerie” has opened and rocketed our playwright to success. But Williams keeps on up-dating us with his fierce and sharp asides—confiding that “Success is not Love.”

Their second meeting is even richer than the first, because now Inge wants to worship Williams. Does he love the real man, or only his sudden success? How does Tennessee deal with this budding playwright, who will later write the hit, “Come Back, Little Sheba”?

Pickman-Thoon owns the space at Inge’s old-fashioned, wood-paneled apartment. He channels the playwright and puts us in touch with Williams’  wit and wisdom. But fearful Inge, delightfully played by the explosive Adam Niemann, has to be coaxed into the sham interview. Tennessee longs for the publicity.

Out of the closet in 1944, the rising playwright is no shrinking violet. But the closeted Inge can barely utter a full sentence. Niemann creates an imposing, sputtering, naive young critic. Up-tight and lonely, he is flummoxed by the voluble trickster, Tennessee.

“You just have to know where to go to hear the nightingales.”
“We’re cruising down the river with the other rats.”
“I give my heart away to anyone—confessing is the fun.”
“You’re too bitch for my taste.”
“What is birth but death in reverse?”

Thanks to Ed Decker of NCTC, and his brilliant collaboration with shining star Dawkins. Bravo to impressive jobs by Pickman-Thoon and Niemann. When “The Gentleman” comes calling, it’s surely time to laugh, cry, and reflect. Let’s go visit them, again.