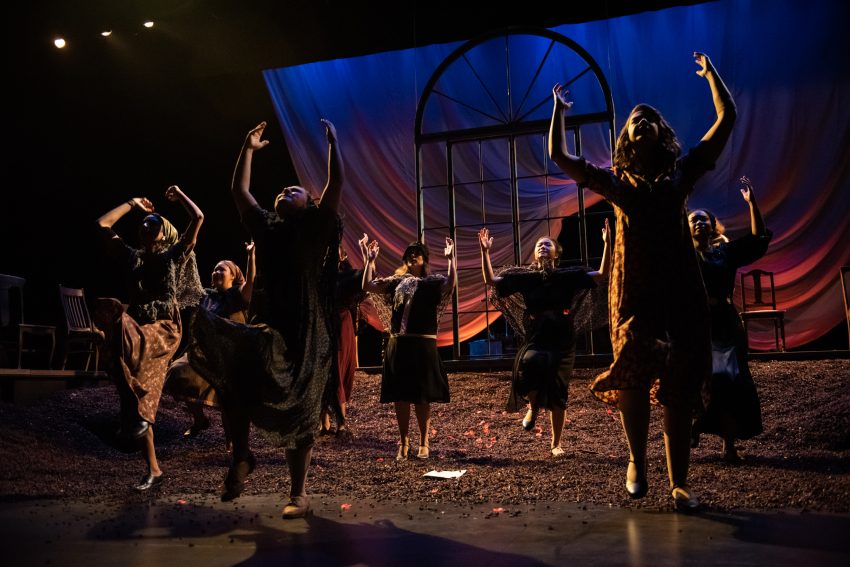 CAL’s production of “The House of the Spirits” is stunning, frightening, incredible! Director Michael Moran creatively transcends time, depicting three generations of the Trueba family. Based on Isabel Allende’s famed novel of the same name, Caridad Svich’s “new play with songs” runs from violent and engaging, to poetic and innovative.

“House of Spirits” reinvents our interactions with history, showing dramatically how the past informs our present. Brilliant director Moran and inspired scenic designer Nina Ball confront us with a giant three-sided U-shaped boardwalk, surrounding a massive beachfront of redwood chips. The design creates a Greek arena, and the synchronized cast acts as a Chorus on the wooden walkways.

Nina Ball’s stunning set symbolizes the natural wealth of the land. In this Latin American dream world, chairs float in the air, and a magical copper gateway descends from the rafters. The chairs illustrate the generational changes that befall the family. On the breath-taking set, the talented cast uses stylized, choral gestures to magically bring the story to life.

Over many years, sturdy Esteban Trueba (imposing Abrar Haque), a former peasant, becomes a rich landowner and then, a powerful Senator. But when he gets rich, he forgets his past and becomes an abusive boss, heaping scorn on his own workers.

The determined Clara (angelic Abril Centurion), Esteban’s wife, grows from a rebellious girl to a strong, confident woman. In vain, graceful Clara demands humanity from her increasingly cruel husband. We see that a cruel overlord refuses to listen to reason or love.

As Esteban forgets his peasant origins, we are appalled. He abuses workers, women, and his own offspring. When Esteban encourages a brutal dictatorship in his country, he finds that he cannot save his family. Isabel Allende recalls the horrors of Pinochet’s murderous regime in Chile.

Esteban’s granddaughter Alba (open-hearted Brenda Cisneros) is tortured by the dictator. We see that the sins of the fathers do indeed bring suffering to all. Despite the pain he has inflicted on his workers and children, we feel the old man’s solitude.

“Nobody likes talking about terrible things,” says Alba plainly. Alba demands that we recognize her torture and confront uncomfortable memories.

In a beautiful moment, the entire cast gathers around Alba. We realize that she can transcend history through her writing. The singing, the choreography, and the immaculate movements of nineteen cast members touch us, viscerally.

Esteban’s attempted redemption challenges our habits of demonizing. “House of the Spirits” ends as it begins, with fantastic momentum. Bravo for the spectacular design, and superb cast and crew! We are captivated—right up to the final startling image. Don’t miss a unique CAL achievement. 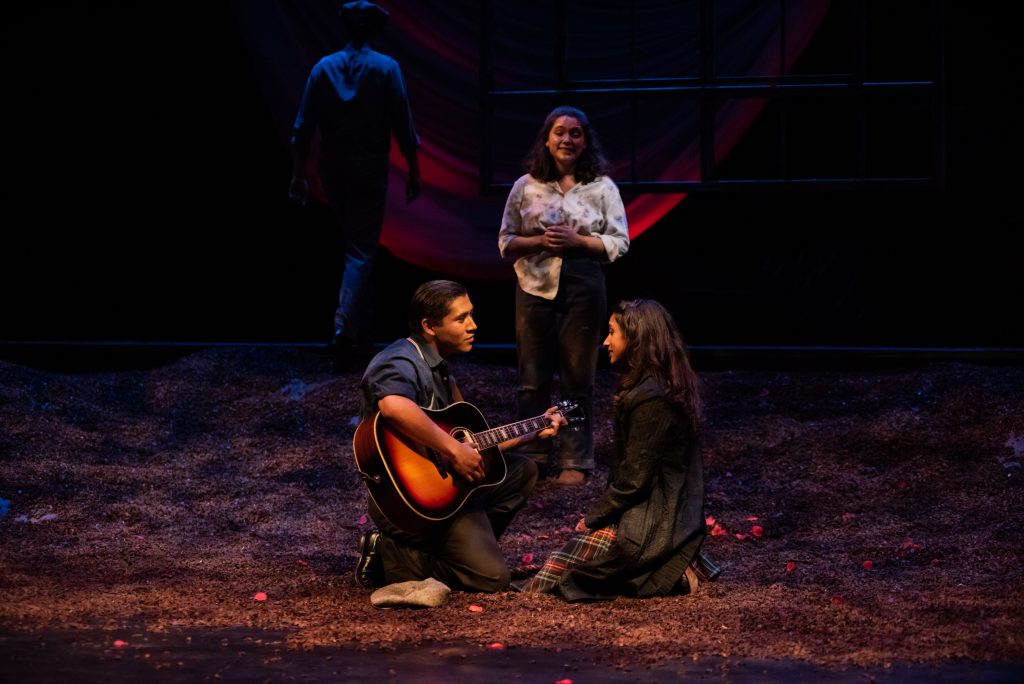 “The House of the Spirits” by Caridad Svich, based on the novel by Isabel Allende, directed by Michael Moran, scenic design by Nina Ball, at The Playhouse, by Theater, Dance, and Performance Studies, University of California, Berkeley, through Sunday, May 5, 2019. Info: tdps.berkeley.edu