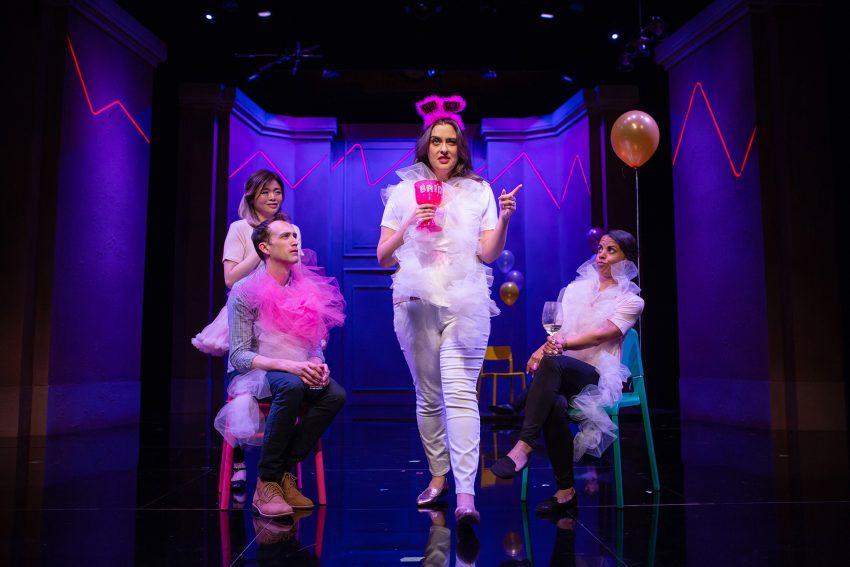 Gawky, self-conscious Jordan Berman (Kyle Cameron), a gay ad copywriter, is trapped by his own neurosis. Jordan and his three dearest gal friends are drinking and carousing at the first of three bachelorette parties. His three wild gal pals will all be married by the end of this show, but Jordan is not so lucky. His awkward, self-defeating attitude keeps him from finding Mr. Right.

Although the girls eventually find husbands, Jordan refuses to grow up.

At work, aloof history-buff Will (ethereal August Browning) catches Jordan’s eye, sending him into a predictable tail-spin. Browning brings a mysterious energy to the elusive Will, who inexplicably disappears from the story. Luckily, Browning also plays Conrad and Tony, two other boyfriends, excellently, as well.

Here’s a rom-com that investigates Jordan’s psyche. He’s one frustrated New Yorker who would ordinarily be the sassy gay sidekick; but Harmon puts him center stage, exposing Jordan’s self-indulgent rants and raves.

Later, at Laura’s wedding, Jordan throws a tantrum when she refuses to make him a bridesmaid. In retaliation, Jordan’s dark and selfish feelings erupt in an epic rant, tearing up the stage with vicious accusations. We realize the depths of Jordan’s self-delusion. It’s the high point, a show-stopper!

Jordan says: “Your wedding is my funeral.”

Laura enlightens him: “Fuck you! It’s not about you! You really test the limits!”

Like Seinfeld’s George Costanza, Jordan never overcomes his self-hatred. He dwells in the land of self-pity, ignoring small moments of joy. At Laura’s wedding, he watches her dancing with her new husband, feeling completely alone. His last BFF is gone. We wonder if he will ever wake up from his delusion.

“Significant Other” examines the multiple ways that Jordan rejects his friends’ help. The play warns us against self-martyrdom—even when it’s hilariously funny.