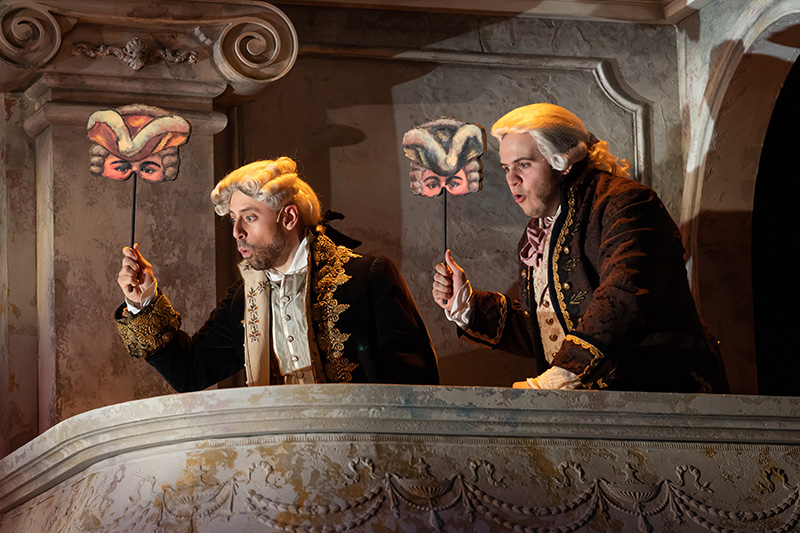 Hamill’s anti-hero Becky Sharp (inspired Rebekah Brockman) cleverly pursues clout and wealth. She’s an orphan of French descent—bad news for her, since in 1810, England is fighting the dreaded Napoleon. Becky, a poor charity student, is abused by her nasty school-mistress for being “uppity.”

In this soap opera on steroids, the actors dash full-tilt through bankruptcies, failures, family rejections, and vainglorious wars—with great laughs. Through the comedy, “Vanity Fair” asks: “Do we live like Becky, accepting a huge wealth gap, and blind to poor women’s suffering?”

An exploited woman, Becky exploits friend and foe. When she visits the home of her loyal school-chum Amelia Sedley (sweet Maribel Martinez), Becky goes for Amelia’s bumbling brother Jos (witty Vincent Randazzo). She’s after the money—her only goal in life!

The raucous cabaret-style Manager of the popular music hall (bubbling, infectious Dan Hiatt) addresses us directly, inviting us into the circus of “Vanity Fair”—where the amoral wealthy flourish. He coaxes us into the whirligig of self-indulgence. As Sugar Daddy Lord Steyne, he dangles money in front of Becky, inviting us to see ourselves in her.

The style of the production is over-the-top comedy—signaling that the upper crust will have its way. They sing the lesson: “Everybody is just doing their best.” But they have no goal—only money and nationalism motivate them—and love is for sale.

The guys in scarlet uniforms go off to India, to make fortunes for the Empire. And they go to war with Napoleon to smother France’s threatening revolutionary ideals. Plucky Becky will do anything to join the men at the top of the social ladder.

ACT’s “Vanity Fair” asks: “Are we Becky Sharp all over again?”

All photos by Scott Suchman