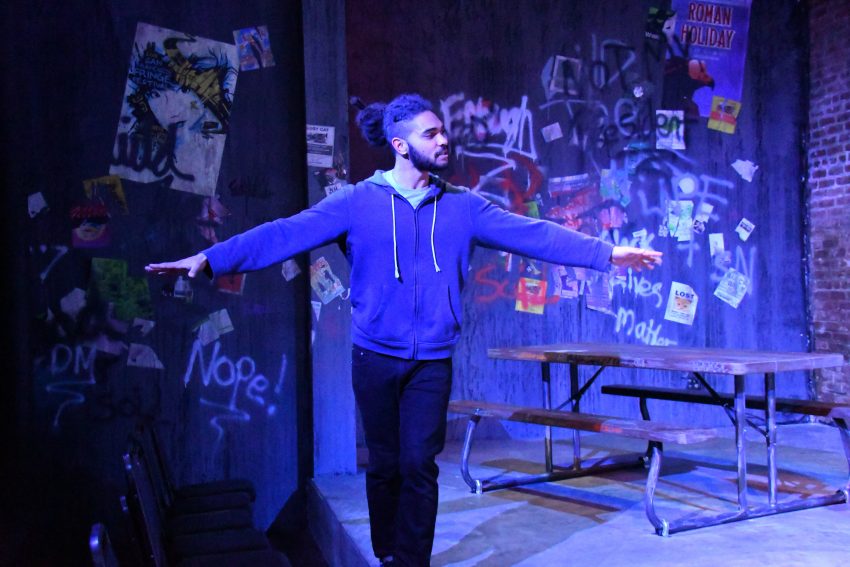 After the Officer (convincing Kyle Goldman) shoots young, African American Connor (passionate Geoffrey Malveaux), we feel angry and frightened because we could be them. In the USA, we easily become either victims or oppressors.

Scenic Artist Marykerin Naughton splatters colorful, cryptic graffiti on weathered wooden walls. Even though we don’t understand the graffiti, we know these are the defiant signs of the silenced and neglected.

When his father is killed in a random mall shooting, Connor’s anger turns into resentment and irreconcilable guilt.

Fellow high school student Jamal (impressive Gary Hughes) attacks Connor in the hallways. In an escalating, chest pounding confrontation filled with “yo daddy sucks,” Jamal breaks his hand against Connor’s temple. With one punch, Jamal shatters the toxic idea of African American masculinity. I am reminded of the constant bullying that still goes on in East Bay schools.

Connor’s care-free girlfriend Alex (confident Wera Von Wulfen) fails to understand Connor’s daily struggle as an African American. She wants to support Connor, but in her own selfish ways. She refuses to discuss politics and social injustice. “White guilt” clouds her judgement.

After a shocking encounter, “Supremacy” leaves us in a cathartic state, wondering if this vengeful cycle will ever be broken. “Supremacy” challenges all of us to control our inner biases. We cannot let fear rule us. We need to be courageous, to become super human like Connor.