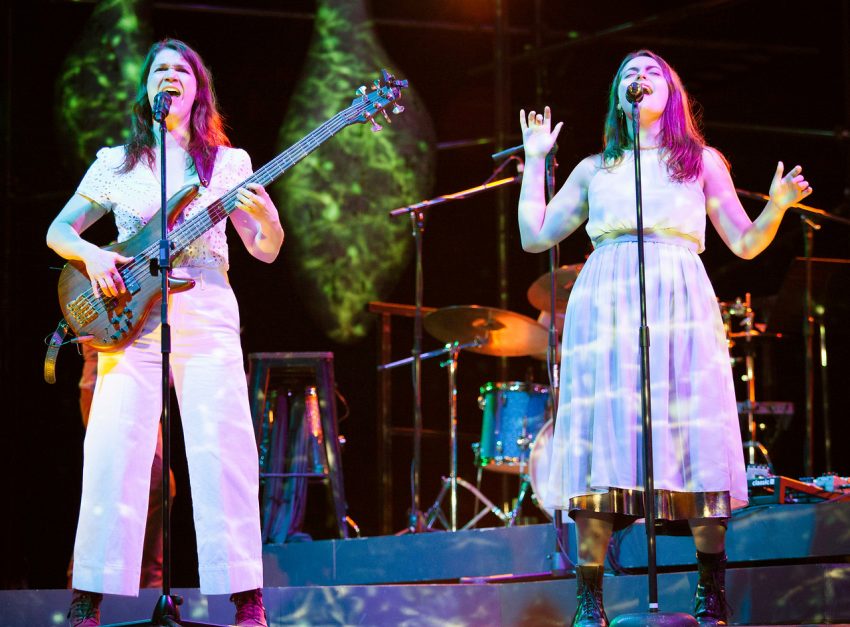 I admit, I knew almost nothing about “Weightless” before the Opening Night at ACT’s Strand Theater. I did not know The Kilbanes or their music. I read the description: “part concert, part play, part dream,” which left me skeptical. But, it turns out that “Weightless” creates a new form: part Indie Rock Opera and part cutting-edge experimental theater. The “experiment” is a huge success, with Director Becca Wolff delivering a show greater than its parts.

Kate Kilbane and Dan Moses reign as the creative forces behind “Weightless.” Married musicians, they clearly live and breathe “Weightless,” which demonstrates their keen ability to transmit emotions. In addition to their song writing, I am deeply impressed with their raw musicianship, with Kilbane on bass and Moses on keyboard, and astounding Josh Pollack on electric guitar. Despite all the instruments on stage, voices prevail as the critical purveyors of deep emotion.

Sisters Procne and Philomela share a bond like no other—two parts of the same whole. Kate Kilbane plays Procne with strength and conviction. Lila Blue plays delicate Philomela with exacting grace and feeling. They coalesce in a lush story, told through touching song and performance art.

Kilbane and Blue harmonize beautifully; they immortalize the myth for us. Procne is the pragmatic one, while Philomela is creative. When the two women sing together, powerfully and dramatically, I get chills. Their vocal harmonies blend perfectly, symbolizing Procne and Philomela’s united souls.

Tereus, the God of War (Josh Pollock), separates the sisters by luring Procne to his island. Tereus seems harmless enough at first, but we later learn he incarnates evil.  Pollock plays the suave yet sinister Tereus perfectly, with a deep, theatrical voice. His electric guitar becomes part of the role, while his cool, dismissive demeanor both revolts and allures us.

The stage is black, directing our attention to the performers. While the music tugs at our emotions, the stage lighting lends drama with stinging precision.

The brilliant Julia Brothers narrates, moving the myth along, briskly.  As a storytelling goddess, Brothers is clever, witty and chic in a David Bowie style. At first, I find her presence intrusive, but she quickly gains my trust with her “all-knowing” aura.

In “Weightless,” the sisters magically transform ugliness into beauty.

“Weightless”– a rock opera by The Kilbanes, directed by Becca Wolff, inspired by Ovid, at A.C.T, at The Strand Theater, San Francisco, through Sunday, May 12, 2019. Info: act-sf.org