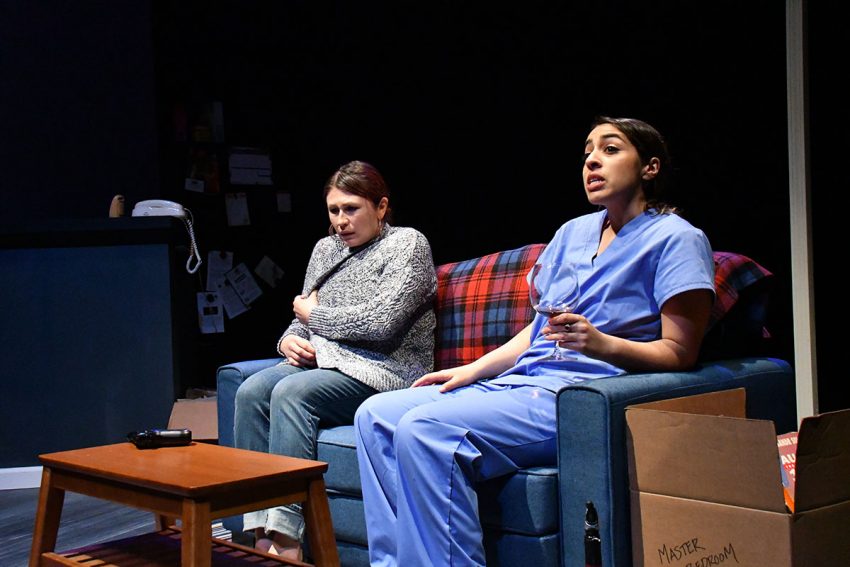 A wonderful fact to reflect upon, that every human creature is constituted to be that profound secret and mystery to every other. —Charles Dickens, A Tale of Two Cities

In “Far, Far Better Things,” although two women share bonds of color, single motherhood, and foreign birth; they dwell at opposite ends of the social ladder.

In Geetha Reedy’s play, Baby Aubrey is being raised by two women: her mother and her nanny. Zoe is a young South Asian-American doctor, played by the precise Kimiya Shokri. Pilar is her undocumented Latina nanny, played by the vulnerable Michelle Navarrete.

Playwright Geetha Reddy uses this unorthodox family to demonstrate that women must secure their own safety by banding together.  “Far, Far Better Things” shows that, despite social class, women can share common burdens.

But Dr. Zoe treats Pilar, her child’s nanny, with disdain. Shokri brilliantly portrays Dr. Zoe’s naive arrogance and entitlement. Reddy dramatizes the vast class difference between these two immigrant women in America. Although Zoe thinks they have a symbiotic connection, actually she patronizes her fellow immigrant. During this time of ICE raids, Zoe assumes that she is saving Pilar from arrest and deportation.

Pilar’s teenage daughter Dani (comical Neiry Rojo) phones her from school, from behind a backdrop of cleverly hung veils that put her at a distance. Pilar and Dani have a charming friendship, punctuated by perfect comic timing. These two become a tightly bonded mother and daughter.

But, there’s a serpent in the garden: Zoe’s traumatized teenage brother Josh (cool Yohana Ansari-Thomas) projects his suffering onto Zoe, Pilar, and little Aubrey. As the only male in their home, trifling crybaby Uncle Josh endangers the women. The women work together to create a home that’s safe from both Josh’s threats and the immigration raids.

But Dr. Zoe’s privilege, profession, and power distance her from the frustrated Pilar. Always dressed in her scrubs, Zoe rarely comes home; yet she imposes her control by forbidding Pilar and Aubrey from leaving the house.

Irrational and anxious, Zoe also fears her neighbors’ vicious prejudice against Brown people. Zoe claims, “They only accept me because they recognize me from back then [growing up in this house].” The privileged doctor tries to control their lives, even when she’s absent.

While the first act features thorny politeness and awkward conversations, Act Two erupts with revelations and insights. Suddenly, a shocking secret surprises us, revealing a dangerous past, and giving me goosebumps.

Women can overcome domestic violence and bureaucratic bullying only by banding together. Only cooperation can ensure that our daughters will discover “Far, Far Better Things.”