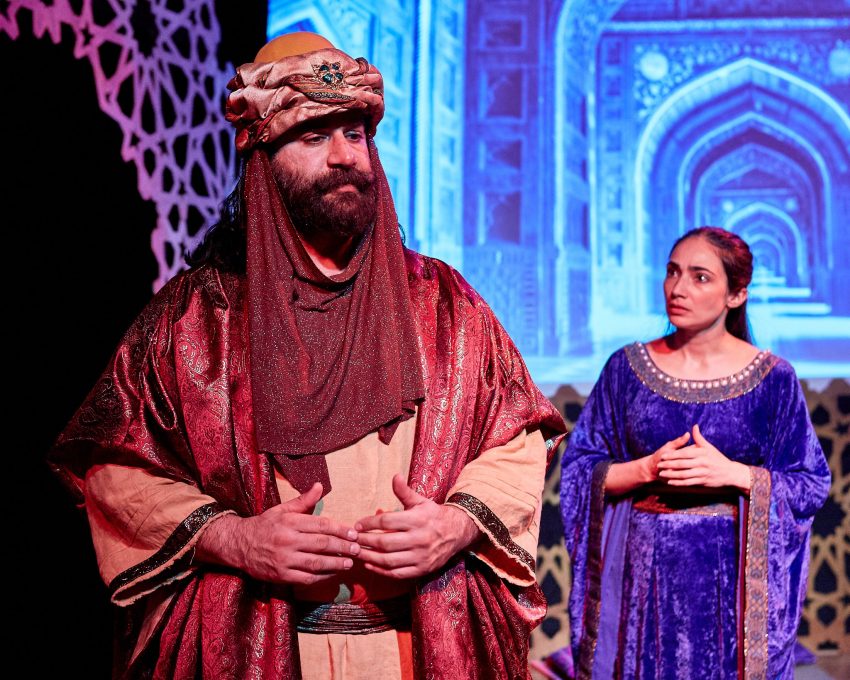 Since the medieval Crusades, Muslims and Christians have fought over the Holy Land. In “Terrritories,” playwright  Betty Shamieh dramatizes the capture of Sultan Saladin’s sister, Alia, by his  hated enemy Reginald of Chantillion, the cruel Crusader King.

On the other side, we find ourselves in the dungeon of Reginald’s fortress on the road to Mecca. We feel the bleak, cold stone of Reginald’s Frankish castle as on screen. This dungeon will hold Alia captive.

Costume Designer Liz Claybaugh has created sumptuous and accurate garments.  Alia impresses in a beautiful flowing gown with scooped neckline. Saladin appears majestic in the turban and robes of a sultan. Reginald is imposing and imperious in the battle dress of a Knight Templar.

Katrina Yashar dazzles as the complex Alia, sister to the famous Saladin . In a cruel twist of fate, despite her physical beauty, Saladin cannot find her a husband because Alia suffers from uncontrollable seizures.

As the play opens, Alia begs Saladin for permission to visit Mecca to pray for a cure.  Saladin opposes her haj, since she must pass the citadel of the hated Reginald, the only Crusader refusing safe passage to Muslim pilgrims. But politically astute Alia maneuvers Saladin to grant her departure.

As feared, Alia is captured and comes under the control of Reginald, the cruel, power hungry Crusader. In a surprise twist, sexual magnetism overcomes their differences, as Alia and Reginald are drawn to each other. In their spirited exchange, Reginald realizes that Alia is politically savvy and wanted to be captured—but to what end?

Alia appears in every scene, emphasizing her central role. With Yashar’s broad range and hypnotic allure, we find ourselves sympathetic as she is brutalized by Reginald. And then angry when she is controlled by Saladin. Yet, in every moment, Alia’s strong will and intelligence shine through. We realize that her political skills surpass Reginald and Saladin.

Shamieh’s brilliant dialogue generates an exciting battle of wits between each of the three characters. We are swayed in turn by each character’s complex and persuasive motivations. And a final twist overturns the cart, leaving us shocked.

As if to emphasize her public limitations as a woman, Alia emerges, finally, wearing the traditional hijab. She appears as a subservient Arabian woman—far different from the exciting adventurer or the powerful politician.

“Territories” is a tour-de-force for Katrina Yashar and I highly recommend that theatergoers take in this highly entertaining and satisfying tale about the Crusades.

The issues raised by “Territories” shed searching light on the present wars in the Middle East, and the condition of women in the world.  “Territories” offers secrets and intrigue—a voyage to discovery of other cultures.