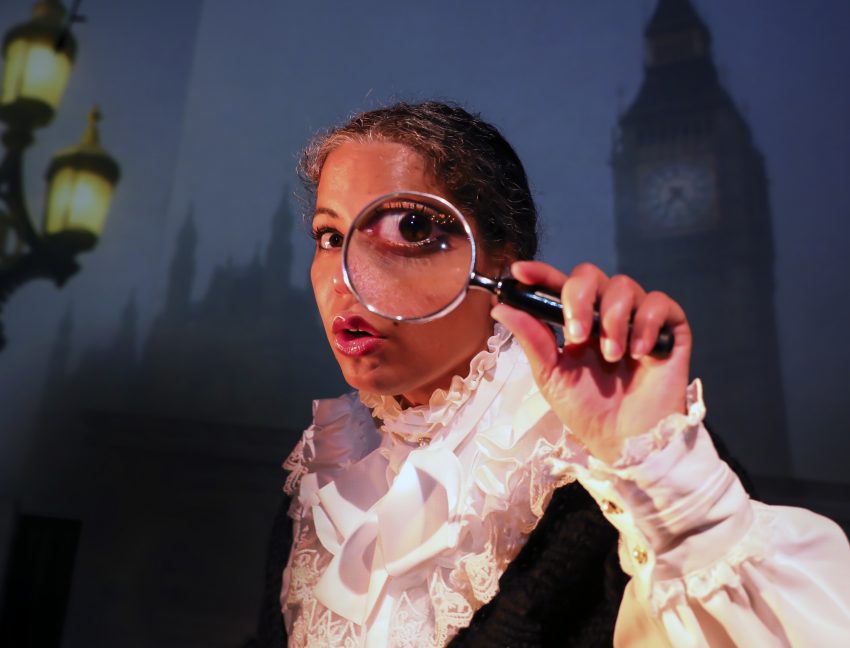 Victorian London is plagued by an infamous killer called The Butcher who is meticulously killing young actresses. Two sisters, Valeria (Jan Zvaifler) and Loveday (Stacy Ross), decide they will discover who is killing these women.

In “The Victorian Ladies’ Detective Collective,” Valeria and Loveday run a boarding house and it’s their wards who are slowly being picked off. Loveday, a retired actress herself, fiercely fights to restore a sense of right to the corrupted Victorian world. Though she’s been told that she’s “too seasoned” to be of interest to the killer,  Loveday is still obsessed with finding the murderer.

At Central Works, the sisters peel back The Butcher mystery by decoding secret messages that women leave behind. In the male-dominated England, our ladies take on anti-heroic roles. Like chameleons, they adapt and change their looks using disguise and dark humor.

When Loveday obtains gruesome photos of the murder victims, she turns into a cunning  feminist. Beneath her flouncing petticoats, she wears a pair of breeches to pursue her prey.

In contrast, Sister Valeria spends her days doped up on heroin, complacent in her position. But,  below her sternness, Valeria keeps a secret. She walks across the room methodically, in her red flowing dress, as she pets her cat John Bean. Her own mystery deepens the hunt for the misogynist murderer.

The sisters have a semi-cordial relationship, although they bicker endlessly. They have survived without men, at a time when women were property. These ordinary women spend their time in service to a cause greater than themselves. They have taken control of their lives–an daring experiment.

One of their tenants, American actress Miss Smalls (Chelsea Bearce) starts snooping around Loveday’s newspaper clippings. It turns out that Miss Smalls is a trained martial artist, who uses a beautiful black fan edged with knife blades to repel offensive men. She and Loveday hit it off like gangbusters, and she  charms her way into becoming Loveday’s partner. Miss Smalls thick Southern jargon pairs well with the drier British humor.

These ladies give Sherlock Holmes a run for his coattails! They are fighting against a patriarchal system that wants them to fail. The only men they know have either hurt them or disdain their budding detective skills.

Loveday has to face the disreputable theater owner Jasper (Alan Coyne), who physically assaulted her and ruined her reputation. And the male constable (Coyne, again) laughs in  Loveday’s and Valeria’s faces when they try to advance the investigation. The officer compares women to cats, and men are dogs–and it’s not a compliment. Coyne is phenomenal in both roles and makes us instantly repel him. We question, is he the murder out of sheer dislike.

In Berkeley City Club’s intimate parlor, Central Works keeps us laughing and guessing. We are witnesses to women breaking new ground. Famed Berkeley architect Julia Morgan, who built the famous “Little Castle” where Milton’s play is running, would be proud of these women. A Big Thanks to great rebellious women, every day.