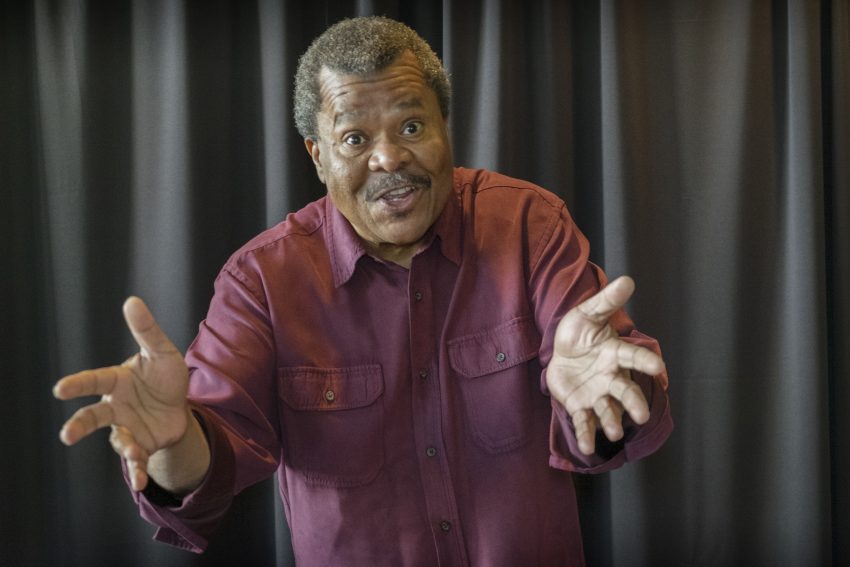 Memories hold us together, binding families and friends.They weave the fabric of our lives. For Wayne Harris, a Saint Louis jazz man, his memories center on his mother. He tells us that his mother was like a cool drink on hot Saint Louis morning. Mothers hold a special place in Black culture—mothers are the rock.

But Harris’s abusive father and cruel “Uncle Bill,” his self-righteous stepfather, mar the good memories of his childhood.  Uncle Bill forces them to live in a dark house to save money.  He forbids them to sing, leaving Harris with sad memories.

In “Mother’s Milk—A Blues & Gospel Play in Three Acts,” Harris recounts many racist injustices heaped upon him as a black youngster in  segregated neighborhoods. His music is rooted in the experience of racial prejudice.

Harris escapes home when he gets a chance to play in a Drum and Bugle Corps. He finds success in bigger bands and simply marches away from home—all the way to California.

Harris plays the blues on the largest bugle I have ever seen—like a Saint Louis angel. This bugle liberates him from his domineering stepfather, although he returns for his mother’s illness.

Harris brilliantly plays many people from his Black culture—church ladies and nosy neighbors imploring him to come to Jesus. He evokes the voices of gospel singers whose songs reflect both sadness  and salvation. Harris channels a woman singing “Crossing the Jordan,” testifying to the hopelessness of Black life in the south.

Harris has the knack of stepping in and out of characters and movingly singing songs that formed his youth. He takes us back to his mother’s Church with “God Bless the Child.”  He sings beautiful gospel songs and early blues classics he heard on the radio, including “The Saint Louis Blues.”

His mother’s cancer surgery traumatizes him because he believes her love emanates from her breast and would now be diminished. She, on the other hand, is joyful that her sickness has drawn her son home.

A mother does more for you than any other person. Her death leaves Harris overcome with emotion. At her funeral, Harris fears he may drop her coffin. And he laments his lack of fervor in the prayer circle, under bullying looks from “Uncle Bill.”

Harris is a masterful storyteller and he has many versions to tell.  How do you encapsulate a lifetime into one hour? His stories meander from the mundane to the profound—a lifetime full of insights.

Working with bass player John McArdle and pianist Randy Craig, Director David Ford has molded Wayne Harris’s wonderful talents into a compelling and uplifting story of survival, redemption, and a mother’s love. Don’t miss the inspiration and the music.