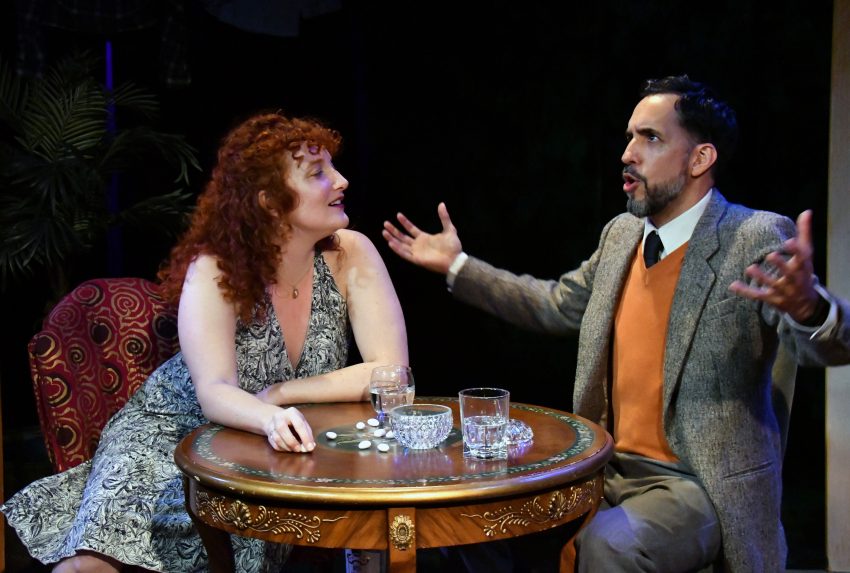 An aging professor crashes at his first wife’s house with his hot young wife. Their arrival shakes things up at the quiet country estate: routines are ruined, old resentments are relit, and all hell breaks loose. As the title suggests, each character in “Life Sucks” is dealing with major heartache—lost love, unrequited love, a wasted life.

The plot comes from Anton Chekhov’s “Uncle Vanya,” and Aaron Posner’s “sort-of adaptation” starts with Chekhov’s dark comedy, but then updates each character’s suffering for today. The characters become raw, straightforward, and thoughtful, compelling us to feel what they feel.

Director Brian Katz has crafted a juicy production, complete with intense arguments and gestures of love. At delightful moments, the cast speak candidly to us, sparking insightful thoughts and even responses from the audience.  These dramatic moments intensify the actual dialogue, and elicit sighs of empathy. “Life Sucks” is a meta-comedy that runs off the rails, and right into our hearts.

The pitiable Professor (a pompous Dave Sikula) endlessly complains about his age, to get some sympathy from his third wife, Ella (alluring Emily Stone). During a late-night argument on the couch, she jabs, “You’re pathetic!” He collapses, changes tactics, and sadly grovels, “Yes I am!”

Ella doesn’t tiptoe around the tension she has created with the men in the house.  She fiercely goes after the Doctor, updating Chekhov’s prim and proper flirtation.  Ella and Aster’s make-out sessions in “Life Sucks” are passionate, to the extent of being hilarious.

The action unfolds in a summer-camp-like deconstructed room, complete with dusty rugs and a wrestling-match style bell, which each character dings before entering. Costumes are colorful yet faded, perfectly plain like the country life they lead.

Jensen Power portrays Sonia, the professor’s daughter, with ease and grace. Ever so careful not to step on anyone’s toes, Sonia runs the estate quietly and selflessly, at one point claiming that she has no needs of her own.

But when the other characters leave her on the stage alone, true awesome young-woman-power kicks in, and Sonia graphically describes her lust for the doctor. Jensen Power makes Sonia multi-dimensional and achingly honest. Sonia is the gal we want to succeed, but we know she won’t.

Uncle Vanya’s intense hatred of the Professor translates today into a disdain for academia in general, including art theory, criticism, and “abstract thought.” This anti-academic strain strikes a familiar chord for students who are riddled with debt or, struggling to find a job worthy of their expensive degrees.

This funny show breaks down the walls that separate us from each other, making life suck a bit less—if only for two brief hours. Posner heightens the grotesquely comic suffering, and then lets us know we have to get on with our lives, godammit!