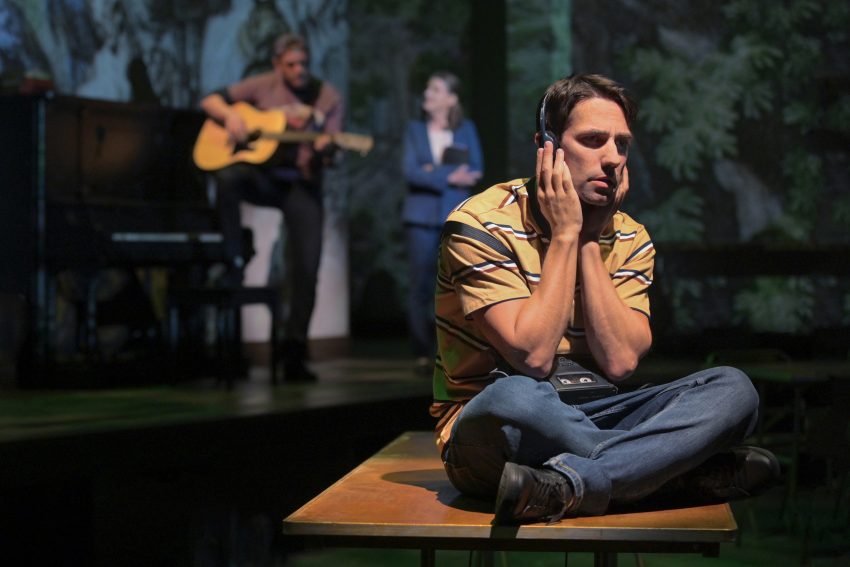 So many Bibles, so many thousands of years . . . and those translations…. the King James Version, the Catholic Vulgate…. The Ancient Hebrew…. The New Princeton Revised…. How have they influenced us over the ages? These questions haunt the lives of an atheist Prof. of Religion and a conflicted, gay Catholic schoolboy…

In “The Good Book,” Lisa Peterson and Denis O’Hare have created a new form of dramedy—a history of the ancient world with a comic flair. They present the harsh and flinty Professor Miriam (commanding Annette O’Toole) alongside the anxious and pious young Connor (tortured, loveable Keith Nobbs). “The Good Book” delights us with far-fetched stories and laughs as the prof and the boy tangle with hilarious Biblical characters who pop up in dreams or visions.

Miriam, a harsh and opinionated Bible scholar, does not believe in The Word she studies. She rejects Faith, entirely. She loves the book, but not the system.

A cynical scholar, Miriam let’s us know where she stands. She gives a hard time to her devoted lover, played with grace and devotion by Elijah Alexander. Magically, her love affair with The Good Book takes her (and us) back in time to relive lively Biblical stories and amazing discoveries.

We meet King James, himself, ancient scribes and monks, and a host of wonderful desert people—all presented with whirlwind humor and bravado by a team of great actors: Alexander, Lance Gardner, Denmo Ibrahim, Shannon Tyo, and Wayne Wilcox.

The ancient stories flash by, mingling with modern ones, until we give up on continuity and just enjoy the wild cascading scenes and furniture. Peterson and O’Hare serve up history with a delightful candy coating.

Along the way, we run into Biblical and modern persons played by a bearded and witty Lance Gardner. Always a delight, Gardner makes a full story of each wild role. Watch the nobly bearded Gardner whisk from Bible to boardroom in the wink of an eye.

Thirteen-year old school boy, Connor, sympathetic and heart-warming, grows up in front of us—a wonderful kaleidoscope of colors and intensity. Connor dreams of becoming a Catholic priest, but he’s much more.

He pours his budding gay identity into a lifetime of personal audiotapes, diving into comic confusion about his sexuality. Keith Nobbs presents Connor’s suffering in vivid, thrilling emotions. Bullied and tortured by family and friends, Connor is obsessed with Bible stories. His heat and humor become a rejuvenating New Testament tale.

“The Good Book” provides Miriam and Connor with plentiful revelations, as their passions bring them together in a beautiful and stirring final scene. Watch every moment of “The Good Book” because it’s a new form of docu-drama that mingles anthropology, science, and faith, in a lighthearted and wise show.
A once-in-a-lifetime joy!