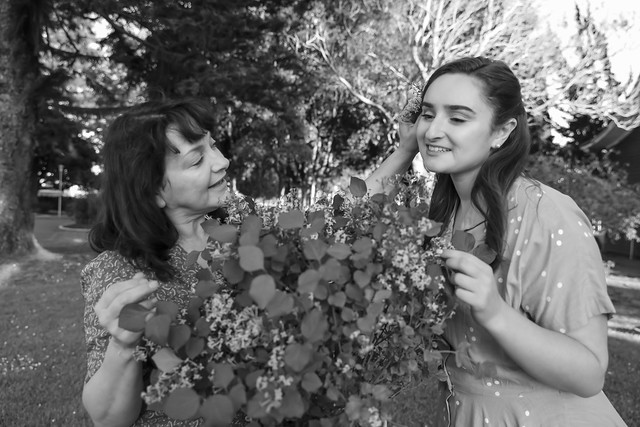 Frazzled, middle-aged Lola Delaney (sweet Bonnie DeChant), a sad soul and rejected wife, keeps calling plaintively for her  dog, Little Sheba. Lola projects her lost, faded youth onto the missing stray. Perhaps if Little Sheba makes her way home, she can also bring back Lola’s prime. We feel sorry for Lola: we wish the oppressive 50s world were that simple.

Her husband Doc Delaney (kindly Ron Cook), a chiropractor, insists that she give up the search. For Doc, the past holds only regrets—an early marriage, a lost career, and drunken nights. We watch anxiously as Doc, a recovering alcoholic, teeters on the edge of sobriety. Doc’s quiet disposition leaves us restless for action onstage.

The childless couple host a pretty young college boarder, Marie (delightful Monique Borses), a surrogate daughter for floundering Lola and Doc. While Marie’s fiancé Bruce (charming Kyle Burgess) is away, she spends the nights sketching Turk, her shorts-clad male model (athletic Patrick Glenn).  Marie, a symbol of freedom, pushes back against the prudishness and restrictions of her time.

Doc represses his feelings towards Marie—we cannot tell if Doc feels desire, or jealousy. Lola expresses her frustrations by spying on flirtatious Marie and Turk, as they kiss and play in the front parlor—Marie’s art studio.

Doc cannot face his empty life, and his solution is alcohol. He represses his obvious discomfort with Marie and Turk’s rampant sexuality.

It’s clear what the characters are feeling, but I’m not sure what they really want—they remain vague and aimless in Dana Anderson’s version.

Unfortunately, Inge focuses on Lola’s regressive sentimentality. She constantly refers to Doc as “Daddy,” plenty submissive for 1950, to say nothing of the modern kink. And Lola constantly gets scolded:  Doc criticizes Lola for never cooking him breakfast. Her neighbor, Mrs. Coffman (amusing Emily McMahon), chides her for poor housekeeping. Even the damn milkman lectures her about mistakes. Why does she keep taking it?

We yearn for a moment of feminist triumph for Lola that never comes. The final scene sees Lola even more submissive to Doc, cooking him breakfast in a newly clean house. Even Marie, our beacon of sexual liberation, gives in to conformity. Neither woman has a chance.

Clearly a deep admirer of Inge, director Anderson presents “Come Back, Little Sheba” as a 50s period piece. I’m left confused—why this play, and why now? Perhaps by replaying our dark repressive past, we can draw our own meaning. Is it repressive Puritanism that destroys their chance to live? I’m left confounded.