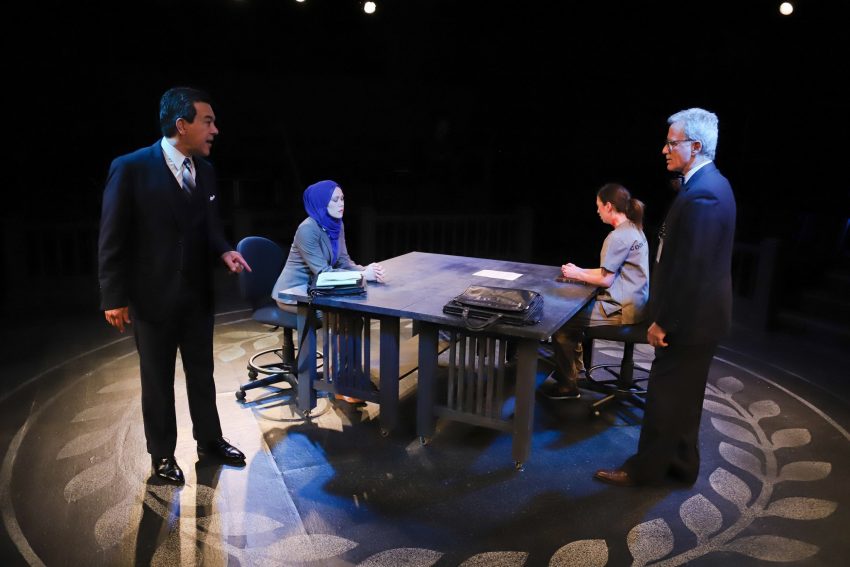 When I heard the “war on terror” was coming to my hometown of Santa Rosa, I knew I couldn’t miss it. Sixth Street Playhouse was packed for Selina Fillinger’s powerful new play “Faceless,” which reveals the shocking number of teenage girls who have left their suburban lives behind to join the Islamic State.

We follow the trial of Susie Glenn (sympathetic Isabella Sakren), a Wonder Bread, all-American high schooler who converts to Islam after tumbling into a Facebook romance with an ISIS recruiter. Facing charges for conspiring to commit terrorism, her radicalization muddies the lines of identity politics—putting “whiteness” itself on trial.

Susie’s plight mirrors the life of 19-year-old Shannon Maureen Conley, currently serving a four year sentence in Colorado for similar crimes. To date, roughly 300 Americans have joined ISIS in Iraq and Syria, a statistic glossed over in our rush to profile and scapegoat Muslims around the world.

The case is complicated by Susie’s working-class origins, her patriotic father (phenomenal Edward McCloud), and her disillusionment with the American dream. Susie, indoctrinated by Fox News, is failed by a school system that leaves many of us lacking critical thinking skills. We, the jury, are forced to ask: “Are these white expatriates crazy, manipulative, or just plain lost?”

Director Craig Miller’s masterful staging takes us seamlessly back and forth between Susie’s exasperated defense lawyer (convincing Mike Pavone) and her chauvinistic prosecutor (uncomfortably charming David L. Yen). While the cast of the show is stellar, I was disappointed to see so few people of color onstage—a sorely missed opportunity to diversify Sonoma County art.

Nevertheless, “Faceless” shows how religion is appropriated by white girls and suicide bombers, alike. “There are real Muslims who have been incarcerated who cannot wear their veils,” the prosecutor’s token Muslim legal aide, Claire (quick-witted Ilana Niernberger), spits at Susie.

Yet privileged white-passing Claire, who does little to free jailed black and brown women, has an uneasy alliance with Homeland Security. She reveals cracks in the idea of a homogeneous Muslim “community,” making it difficult for us to side with one perspective.

In our polarized political climate, 6th Street Playhouse has taken the ballsy step of putting the diversity of ISIS onstage. Despite the play’s plentiful talk about God, the American justice system holds the final power to forgive.

As “justice” grows more unjust by the day, “Faceless” challenges us to see nuance in the cut and dried categories that shape our political debates. Like Susie, we must face our privilege— and begin thinking for ourselves.