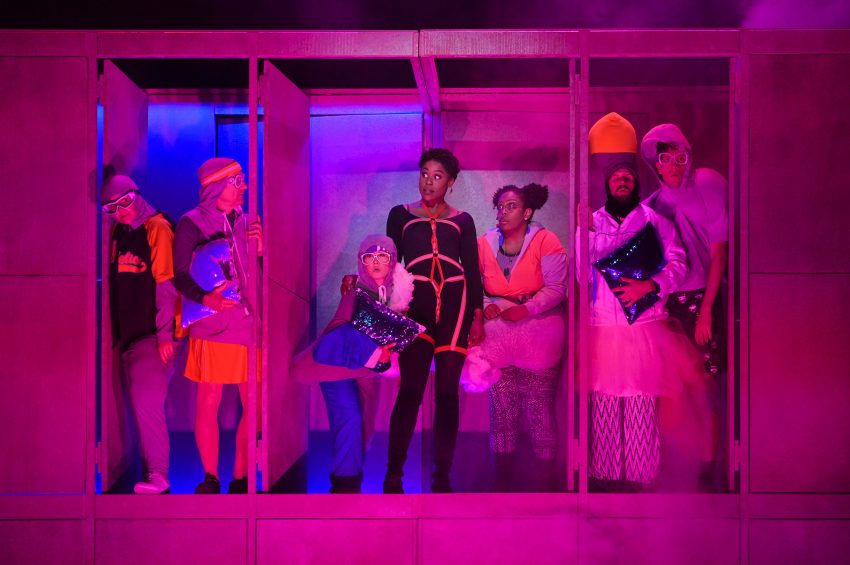 It’s not quite midsummer, but the dream has arrived at California Shakespeare Theater in the beautiful Orinda hills. Director Tyne Rafaeli breathes life into Shakespeare’s best fairytale by inspiring his actors to impossible perpetual motion. They prance and dance tirelessly, appearing and disappearing into the dark woods, magically.

In “A Midsummer Night’s Dream,” many lovers play hide and seek—in front, inside, and on top of Nina Ball’s beautiful, witty set: a large shifting wooden box with nine doors. The stunning, enormous cabinet shape-shifts like a Rubix cube, sliding its stacked doors this way and that. The actors emerge from Ball’s towering cupboard like figurines popping out of a child’s toy chest.

And no actor pops out of the box more than the loveable, devilish Puck (mesmerizing Robyn Kerr). This Puck sports high green socks decorated with peeled bananas. With two large neon balls bobbing on her head, Puck runs laps, and sets up a magical romantic puzzle for our star-crossed lovers.

The verve with which Lysander (lithe Dean Linnard) loves Hermia (hilarious Jenny Nelson) is palpable. We fear for Lysander when he stands up against Hermia’s suitor and her father’s favorite, Demetrius (bold Kevin Kemp). Meanwhile, we laugh at Helena (boisterous Annie Worden), who tries in vain to capture Demetrius, the apple of her eye. 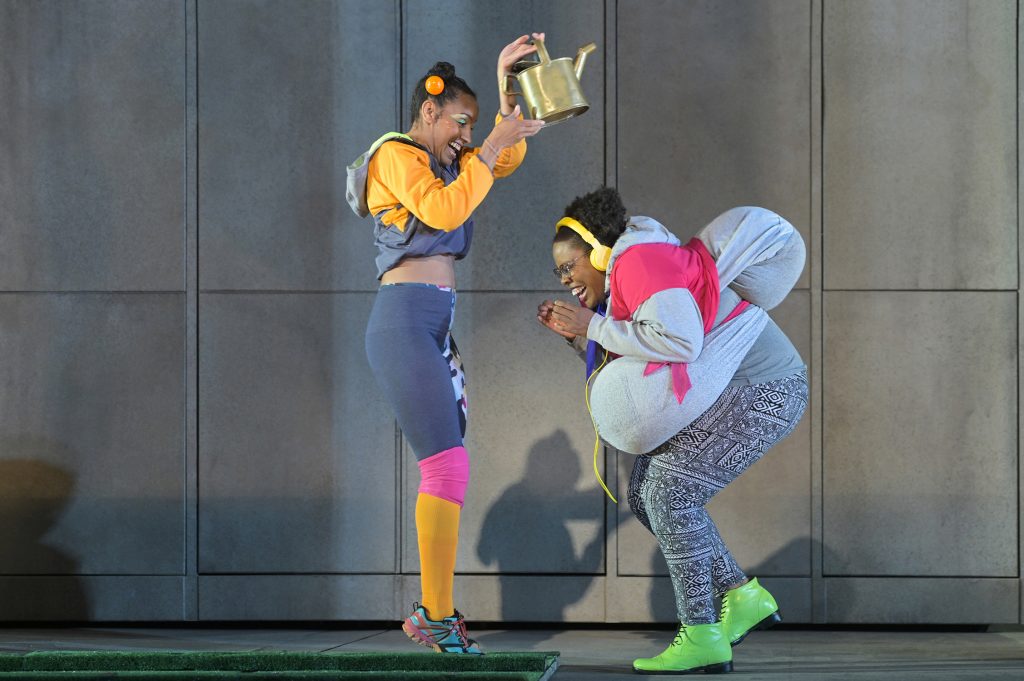 These lovers’ convoluted quarrels could be solved—if only Puck can spread drops of magical fairy juice on their eyelids. The mixed and matched lovers’ shenanigans keep us doubled up in laughter.

Hovering above the mortal realm, the gods’ passions flare up, too. Many mortals are singed and tormented by the wayward lust of Oberon, King of the Faeries (commanding Rami Margron). Oberon pursues his Queen,Titania (elegant Jerrie Johnson), but their dangerous love disorders all of Nature. Titania is supernaturally infatuated with Bottom, a workman with an Ass’s head! 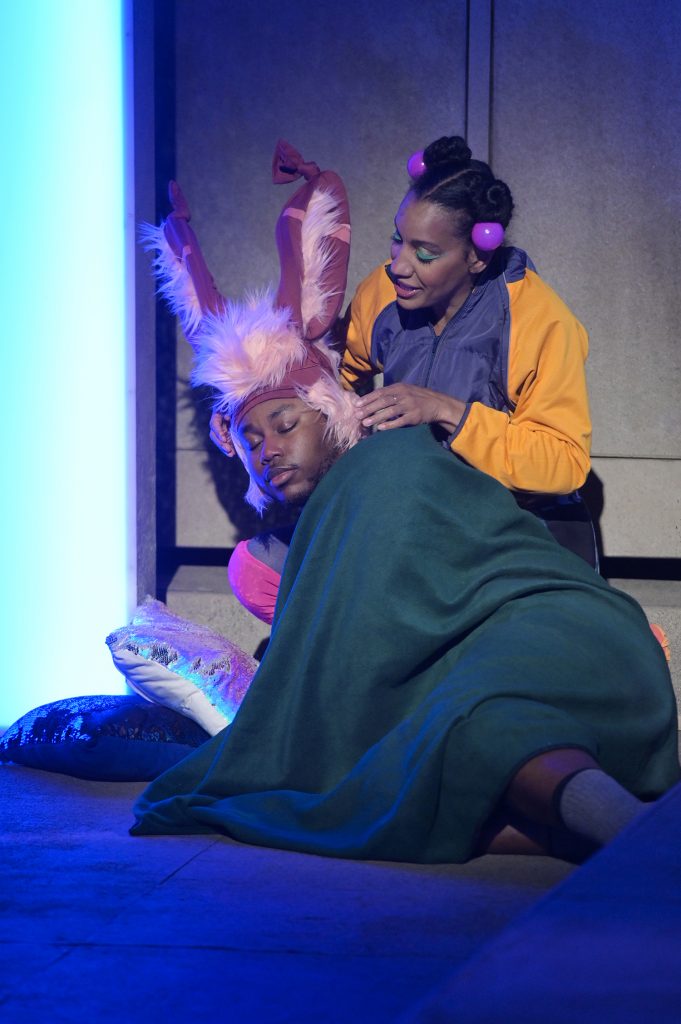 Bottom the Weaver (lively Marcel Spears), the lead actor of a troupe wandering through the enchanted forest, steals the show. Switching between iambic pentameter and modern vernacular, Bottom makes sure we pick up what the play is putting down. He leads us and his “mechanicals” through the magical forest, transforming what would be drama on any other day, into comedy. 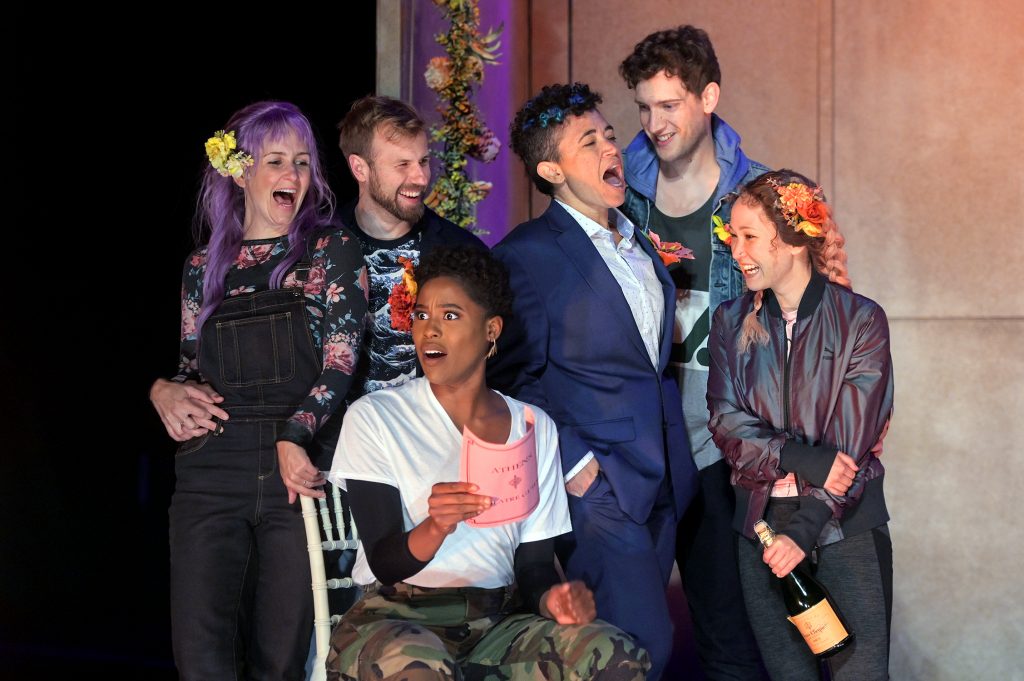 “A Midsummer Night’s Dream” is more magical and fun outdoors, in Shakespeare’s miraculous forest. Among the prattle of the birds and the buzz of the bugs, the fairies come alive. Nina Ball’s magic toy box transforms these wonderful actors into legends. The fairies, lovers, and fools of this dreamy play teach us about the ups and downs of love, inspiring us as they go.