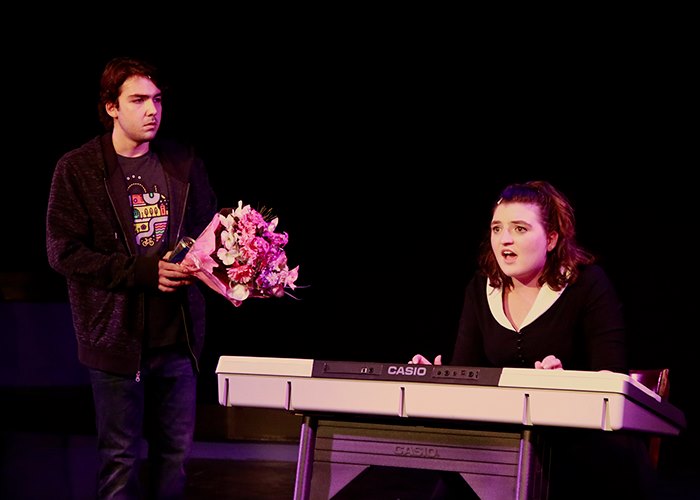 Brian Yorkey and Tom Kitt’s smash hit “Next to Normal” shatters expectations for a standard romantic musical, uprooting the stigma of mental illness with tenderness and pizzazz.

The show depicts Diana (charming Jillian Toby-Cummings), a mother battling bipolar disorder as she and her family desperately try to achieve normalcy. Only a musical could capture the larger-than-life turmoil and ecstasy of a mind torn between extremes. Each song is an episode all its own, offering an intricate understanding of manic depression—an illness characterized by joy and humor, as well as suffering.

Between her fits of manic cleaning and depressive grief, Diana’s illness is fueled by the pressure to be a perfect wife and mother. Tragically, her spiraling moods make her more absent than ever, leaving her teenage daughter Natalie (melodious Ella Ruth Francis) and her faithful but clueless husband Dan (stoic Joey McDaniel) to pick up the pieces.

The emotional tone of the production is spot-on, convincingly rendering the complex dynamics of Diana’s psyche. Diana has run the gamut of treatments—hilariously portrayed in dance numbers featuring a rock star psychiatrist (versatile David Sabre) and a parade of pills.

As Diana’s mental health worsens, intensified by hallucinations of her long-lost son Gabriel (spellbinding Mitchell Mosley), her neglected daughter grows into a young woman with problems of her own. We see our heroine locked in an endless dance with each of her children, her body mirroring Natalie’s as their symptoms intertwine.

Natalie’s stoner-philosopher boyfriend Henry (endearing Anthony Stephens) is a saving grace in her out-of-control life. As Natalie loses herself in a quickly escalating prescription drug habit, Henry tries to hold it all together, eerily echoing her weary father.

Captivated, I left feeling hungry for more. I wish Mosley’s incredible performance as the ghost of Diana’s son were staged to offer more insight into Diana’s emotional world. Still, Gabriel’s presence impresses, hauntingly reminding us what might have been.

A stone’s throw from Stanford and posh Palo Alto, Los Altos Stage Company is well-positioned to explore the underbelly of the American family. Despite its sunny exterior, Silicon Valley is no stranger to the specter of mental illness. Santa Clara County has seen an increase in suicide in recent years, with Palo Alto’s teen suicide rate reaching more than four times the national average.

“Next to Normal” does more than chronicle the day-to-day realities of madness. It calls into question the idea of sanity itself, and challenges the authority of psychiatry when Big Pharma is riding high.

Diana, missing the peaks and valleys of her highs and lows, is asked by doctors to undergo shock therapy and trade a piece of her soul for stability. Her story hits close to home, and leaves me to wonder: Which is worse, the symptoms or the cure?