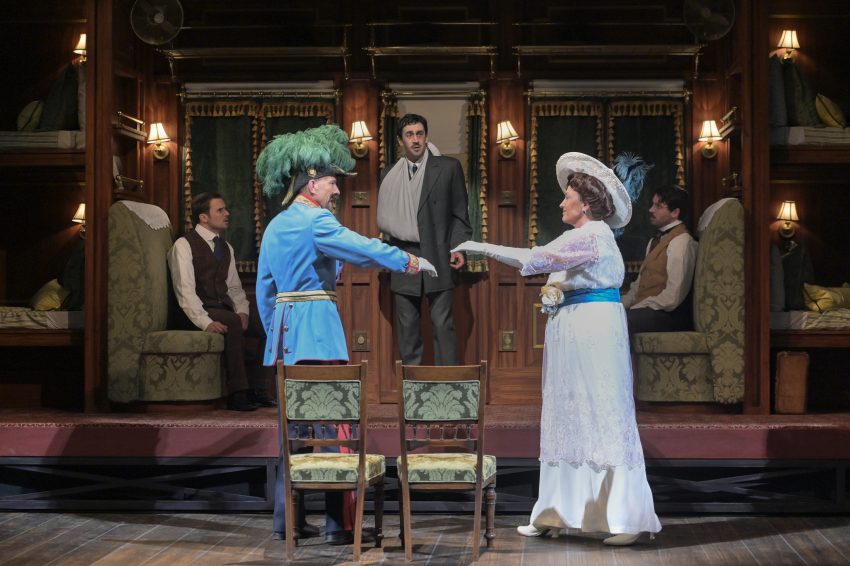 Could there be a more topical play than Rajiv Joseph’s “Archduke”? Here’s a new play about young people manipulated, propagandized, and groomed to give their lives for empty patriotism. “Archduke” shows how older men get the young to fight their battles—in this superb and stunningly staged dark comedy.

Two peasant boys who have been diagnosed with terminal TB—they are called “lungers” back in 1914, in Serbia. It’s a death sentence. The naïve country boys wander in a crumbling, dusty grey barn where the “Doctor” sends them to meet “a guy.” The huge barn stands for the pre-WWI, decaying states of Europe, waiting for their death knell.

Anxious Gavrilo (charming Stephen Stocking) wanders the barn, fearful, delicate, really. He stumbles across another boy, Nedeljko (feisty Adam Shonkwiler), full of bravado. They argue, make the best of it. They’ve never left their village; Gavrilo is hoping for a nice sandwich.

They are interrupted by a tall, bossy fellow who may be “the guy.” It’s Trifko (stalwart Jeremy Kahn) who’s come there to bustle them off to his Captain. Trifko bullies the two boys, then takes them for training in terror and war. It’s a set-up to shanghai boys for murder and destruction.

The comedy gets broader over a lavish banquet table in a mountain castle, in front of giant map of 1914 Europe. Captain Dragutin “Apis” Dmitrijevic, (astounding Scott Coopwood) works laughably hard to brainwash the boys, who are seduced by the lavish food.  Forceful babushka Sladjana (divine, comedic Luisa Sermol) serves and confronts all the men, brilliantly.

The Captain, a lean, vicious recruiter for Serbian patriots, transforms the three young men into super-nationalists. In a magical performance, lean and mean Apis manipulates, trains them to murder Ferdinand and Sophie in Sarajevo. Like Hitler, the crazed captain has his own war story to tell: about capitalist competition in the pre-WWI era, with the Euro alliances at each other’s throats.

These virginal young men are haunted by women they will never know. Even the loyal babushka tries to save them—with baked goods and cheese—but it’s too late.

It’s a rich comedy with superb theatrical tricks and staging. Directed by Giovanna Sardelli in a tight, detailed swirl of history, she makes the prehistory of WWI come alive.

In Act Two, we are treated to the magnificent wooden Serbian railroad car complete with gold-trimming. The three boys are on their way to Sarejevo. But what they really are interested in is the beds and the sandwiches. Give them a sandwich and they’ll kill anybody. Maybe they don’t really need to kill anybody?  When Gavrilo gets to Sarejevo and starts stalking the Archduke, a witty pantomime unrolls.  The result of their encounter makes for brilliant theater, insightful history, and a moving climax.

Now we know that women are the ones we should listen to, not war-possessed men. Listen to the women—change the course of history. But first, join the laughter and applause at Rajiv Joseph’s “Archduke.”