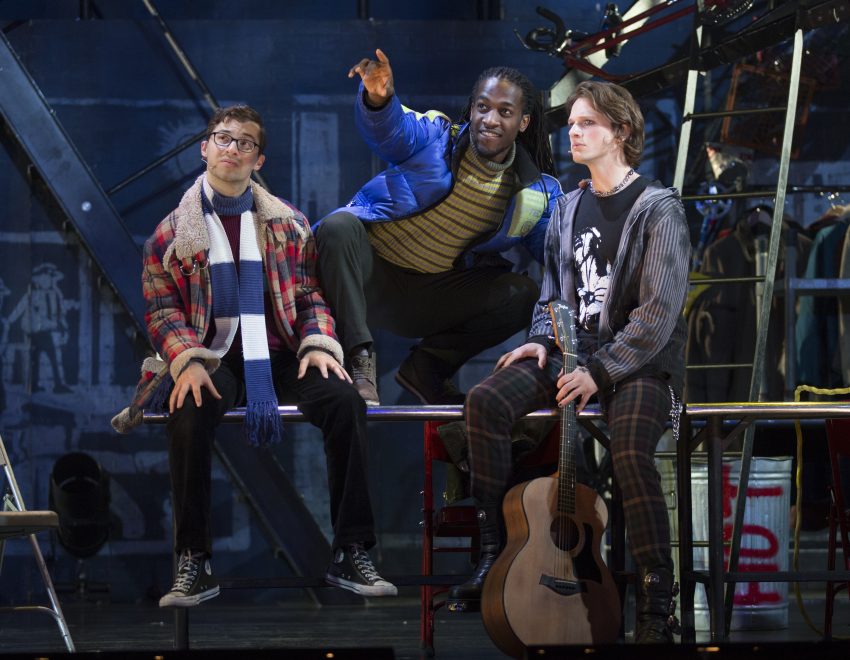 After twenty years of fame and fortune, “Rent” has become a star-making machine. Young people from all over the country turn into shining, new singers and dancers. They spread their wings in the 20th anniversary tour of “Rent” at SHN Broadway.

Joshua Bess as Roger plaintively sings sad ballads like “One Song Glory” while strumming his electric guitar. He prays for the chance to write one great song before AIDS takes him. One of the most believable and touching performers, Bess takes us deep into Roger’s soul.

When Roger meets Mimi (enchanting Deri’Andra Tucker), we sense their dangerous attraction–even before we learn of their dances with AIDS and drugs. Together they sing “Light My Candle” and later, “Without You,” love songs for a threatening time. In the 90s, these young people were threatened by disease, neglect, and rent. Have things changed much?

All the struggling artists in “Rent” have shining moments–whether they are black, white, straight, or gay. Roger and his roommates share love and joy in their in their decaying loft, during the 80s, on the Lower East Side of New York. Each of them is wrapped in serious medical and emotional problems. But they haphazardly come together in a fight to save their building from being sold.

Roger’s friend Mark (energetic Logan Marks) bounces all over the stage with his handheld camcorder. Mark captures their young lives spinning out of control. Sometimes, Mark is annoying and cold. But, he’s a young man on a mission, recording the lives of the young artists as they face disease, eviction, and prejudice.

Even the parents of these “wayward” kids appear, leaving annoying and funny messages on the rebellious kids’ answering machines. The parent’s witty and pathetic messages fall humorously on the deaf ears of their hip kids. They make an entertaining contrast to the rock and roll numbers.

Lyndie Moe plays Maureen, a force of nature, who transforms the lives of her friends. Maureen, in love with Joanne (Lencia Kebede), tears down the theater with her defiant singing and acrobatics. Doing a spectacular dance and gymnastic song called “Over The Moon,” she expresses the essence of love and rebellion. Moe’s Maureen and her talent provide the heart of this ground-breaking rant against powerful landlords and owners.

Javon King delights as Angel. His platinum blonde hair and glittering red lipstick accentuate his boldness in “You Okay Honey?” and “Today 4 You.” King’s Angel brings generosity, forgiveness, and love to “Rent.” No matter how dire things become, King expresses love and caring, angelically. Angel and sweet philosophy professor Tom Collins (touching Devinré Adams) become a stable loving couple at the center of the storm.  Adam’s deep voice captures us, as he sings to his beloved Angel: “I’ll Cover You.”

In the finale, Roger and the whole company sing a powerful anthem, “Your Eyes.” Only at the end do they realize that they’re friends, and that they have to love each other, unconditionally, in order to survive. “Rent”  brings us back to ourselves, now.