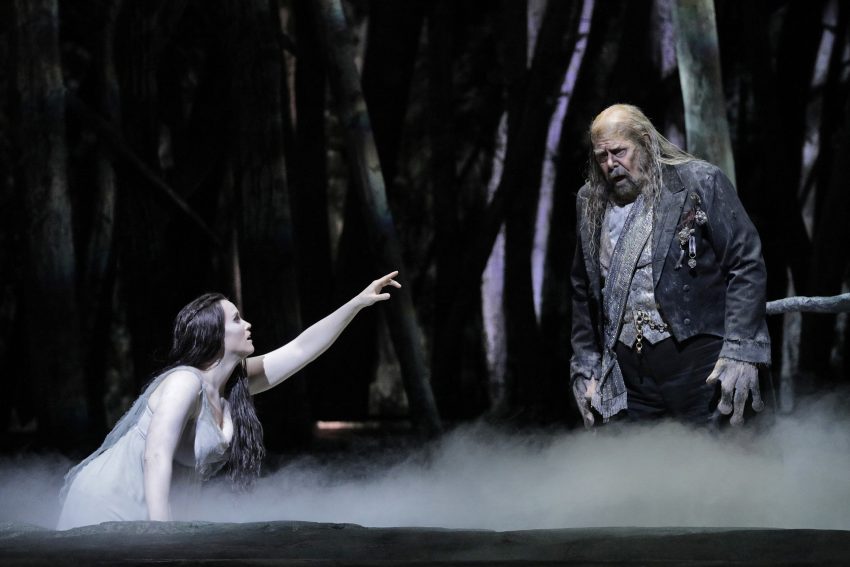 A beautiful water nymph yearning for the love of a human; a prince with his own dreams of escape; an enchanted forest, a magical lake, a scruffy water goblin and cold-hearted witch. Add gorgeous music and glorious singing, and what more could you ask of a fairy tale opera?

Dvořák turned to opera only after great success in other musical forms. “Rusalka” (1901), was his ninth and only widely successful opera. An excellent production from the Lyric Opera of Chicago shows why this opera has endured.

Rusalka, the unhappy water nymph (soprano Rachel Willis-Sørensen), has felt the embrace of the Prince as he swims in the moon-lit lake. To gain his kisses and his love, and the human soul that entices her, she must become human, of course. Her father, Vodník, ruler of the water realm (bass Kristinn Sigmundsson), warns her of danger; but she’s so unhappy, he suggests consulting Ježibaba, the local witch (mezzo-soprano Jamie Barton).

This production deftly adds humor to the drama in the gloomy, misty forest. Barton takes malicious delight in her evil ways, with her cohort of three loose-limbed ravens in fraying frock coats. (You can envision her as Mrs. Lovett in “Sweeney Todd.”) You have to smile, even as the capricious Ježibaba asks for more than Vodník could have imagined.

If she becomes human, Rusalka will have to be mute. And if she cannot keep the Prince’s love, she will become a lost spirit forever and he will die. Rusalka foolishly counters that “love will conquer all.” Soon, in a human body, she meets the Prince alone at the lake, who takes her back to his castle. He seems to be under a spell, too.

But Rusalka cannot feel passionate love or even explain herself. Though the Prince is planning their marriage, he vacillates between her and a Foreign Princess (soprano Sarah Cambidge). When Vodník appears, he learns how miserable his “poor, pale Rusalka” feels in this shallow human world. Understandably, he curses the Prince, and takes his daughter back to the forest.

Librettist Jaroslav Kvapil infused his dark tale with Czech folklore and mysticism, and thanks to Lyric Opera director David McVicar, revival director Leah Hausman, and production designer John Macfarlane, a spooky supernatural mood underlies the emotion-filled story. From the smallest roles to the stars, both singing and acting are first rate.

With its echoes of Czech folksongs, Dvořák’s romantic score is lush, accessible, frequently moving. The dependable San Francisco Opera orchestra, conducted by Eun Sun Kim in her company debut, outdoes itself, especially as the opera soars to its demonic climax.

Just 35, Willis-Sørensen is an exceptional Rusalka. Already famed for his strong, ardent tenor, Jovanovich offers another passionate portrayal in his heedless, conflicted Prince. In their final scene, when he begs for her kiss and she complies (you can feel yourself inwardly crying, “Kiss him!”), they are simply stunning.

So yes, things do work out as the cruel and unfair Ježibaba had said they would. And watching two innocent souls damned to hell has rarely been so entertaining.