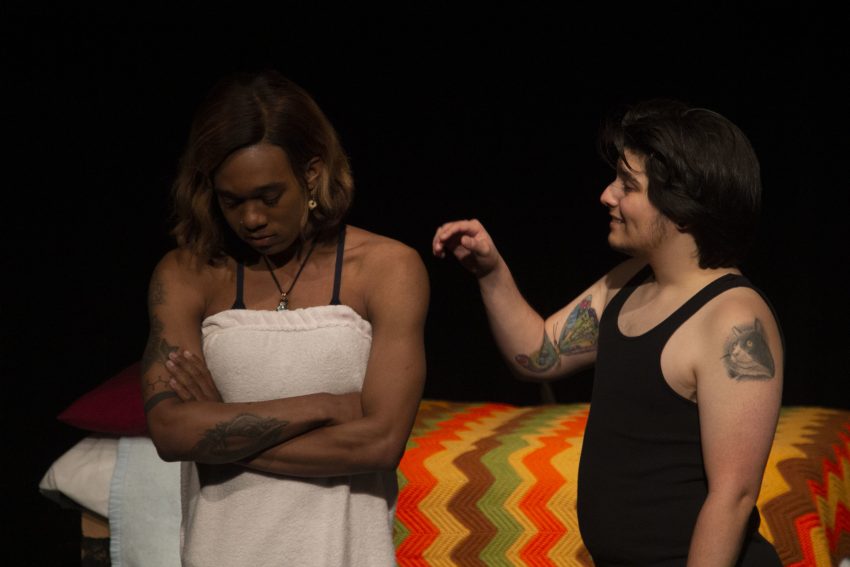 The Redwood City Play Festival, premiering this year with its theme “Gender Shorts,” explores sexism and power through the work of local artists. I was able to catch the first and last of three plays: “Because I Went There,” “Never Swim Alone,” and “Legal-Tender Loving Care.”

Hedvig Flores’ piece “Because I Went There” follows the case of an anonymous man (Armando Torres Pina) who is raped at a college party. His female assailant (Michelle Marin) is a star athlete with much to lose—and we, the jury, must determine her fate.

In the age of “Me Too,” where conversations about sexual trauma often erase the stories of male survivors, I was excited to see this taboo topic front and center. As the play progressed, however, I was baffled to learn that the story takes place not in our own patriarchal universe—but in an alternate matriarchal one, where men are oppressed and women hold ultimate power.

As the details of the crime emerged, I realized with horror that the plot is lifted directly from People v. Turner, the case that shook Stanford University when freshman Brock Turner was arrested for assaulting an unconscious woman. Misguided at best, and offensive at worst, the play appropriates the trauma of a real-life victim—going so far as to re-enact the triggering incident onstage.

Flores sets out to flip the script on gender-based violence, but in practice, “Because I Went There” follows the text of the case with only the pronouns changed. Flores’ “alternate universe” does a disservice to both female and male survivors. It drowns out the voices of women (such as the Turner case survivor), and trivializes sexual assault against men by refusing to examine real-world causes.

At universities like Stanford, where heavy drinking is a cultural norm, the question of consent goes both ways. Men who experience sexual violence are silenced—not by some fanciful dystopian matriarchy, but by patriarchal rules that shame vulnerability. Perhaps some men who had yet to engage with the issue of sexsim were reached by this piece, but as a survivor myself, I left feeling disappointed and misrepresented.

While “Because I Went There” fails to elevate untold narratives, “Legal-Tender Loving Care” by Leanna Keyes succeeds. “Legal-Tender” is a queer millennial love story—as one character puts it, a “trashy romance novel without the trashy part.”

Our young Romeo (adorable Kaz Valtchev), a dashing, dreamy-eyed dork with a penchant for quoting Shakespeare, meets Rosie (captivating Marquise Walker) at a bus stop. Rosie is a witchy, high-femme nerd going by the name “Hermione.” Enchanted, he propositions her for cash and the two head back to a motel room.

Their flirting involves ample references to Harry Potter and “Mulan,” a favorite Disney princess among queer youth. But unlike Mulan’s dramatic reveal, and so many other trans reveals in mainstream media, this one comes gradually—resulting in both characters jumping for joy in a heartwarming moment of recognition.

In light of devastating trans panic laws (used to acquit dozens of murderers who claim the “panic” defense), beauty and power emerge from their connection. With violence against black trans women on the rise, now is the time for trans empowerment. Dragon Productions & Fuse Theatre take a step in the right direction by uplifting queer and trans performers, directors, and playwrights.

The “Gender Shorts” Festival offers some shining diamonds in the rough. I hope that projects like theirs will provide learning experiences for audiences and artists alike, and that next year’s festival will move closer to liberation.