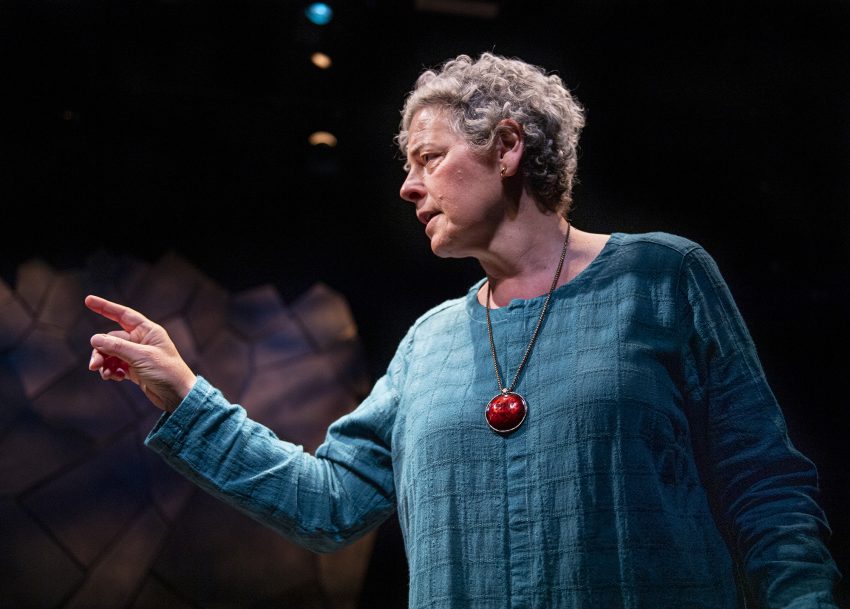 In “The Year of Magical Thinking,” Stacy Ross, playing Joan Didion with flair and subtle authority, invokes the sombre notes of a nightmare lived out in everyday life. As Didion, Ross describes the sudden death of her husband, John Gregory Dunne, and the illness of her daughter Quintana, in a montage of surreal shocks.

Ross’s thoughtful exploration of Didion’s psyche lets us see ourselves in the cool, fantasizing writer. Fantasy serves her, leading her on. Didion tells herself lies, using her eye for beauty. She imagines not only a plane crash, but the “clear blue sky from which the plane fell.”

On a swirl of wide steps, backed by Designer Kent Dorsey’s impressive stony wall, Ross strides into Didion—reliving the unexpected collapse of her husband, as they share a dinner and a fire in their New York apartment. The arrival of EMT help in five minutes throws Didion into automatic. She loses track of herself, focusing on trivial details of their shared life.

Ross sharply evokes the writer at her most raw in the year following the loss of Dunne and newly married Quintana, who contracted a mysterious flu. Brilliantly channeling Didion’s typically detail-obsessed style, Ross takes us to vivid hospital scenes in New York and Malibu. The famed writer is assailed by both rational and irrational struggles with her grief.

For most of the show’s 90 minutes, Didion believes that her husband will return. She hopes to wake up from the nightmare, as she assembles the medical records that chronicle his death. She guards his shoes so he can return at any moment. Ross makes these fantasies touching and surprising, as Didion leaps over her usually skeptical logic.

He does not return, and she is left to consider her life without him, as well as the stories she has told herself. From the New York hospital windows, she sees vast ice floes in the East River, and she is drawn out of herself to embrace a new view of raw Nature.

The deaths that trigger Didion’s year of magical thinking are not unique; high risk activities have no part. She realizes you cannot avoid deaths by skipping ski trips, over-cooking your eggs, or avoiding sunburn.

Subtly, Stacy Ross conducts us into proximity with death, reminding us her family is not ours—yet . . .  Her home is littered with AED pads and blood on the floor. Didion’s peculiar disposition makes her arrange a medical transfer for a husband already dead.

Joan Didion’s grieving process exposes a beautiful humanity in which we can see ourselves. But her tragedy takes place in a privileged world—featuring a private plane from UCLA to Columbia Presbyterian in New York—with suites at the Beverley Wiltshire Hotel and an eerie stopover in a Kansas cornfield.

Even in her rarefied world, we feel Didion at her most human. Her life is far from most of us, but her assault on death draws us in. From Manhattan to Malibu, Stacy Ross takes us on an unforgettable journey—don’t miss it.