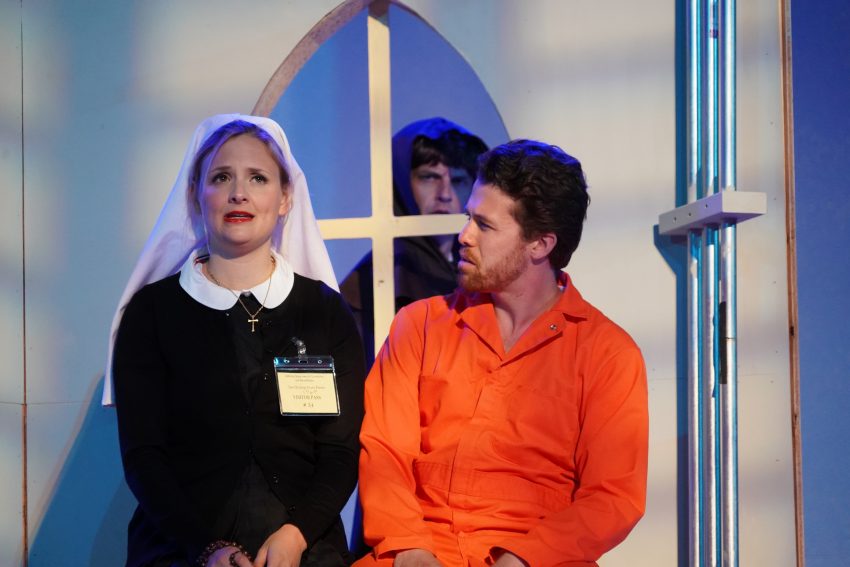 At Marin Shakespeare Company, a rich complement of fine comic actors bring on the fun in “Measure for Measure,” a tragi-comedy.

First, we admire the two magnificent ancient towers flanking the vast outdoor stage. Then, we admire the lovely Tudor brickwork that swings out to reveal offices at one end, and a prison at the other. Finally, we realize that Director Robert Currier is presenting us with two separate worlds to ponder—the one per-centers’ world versus the prisoners’ world.

The rulers run a vengeful injustice system that puts innocents in cages. The prison world is inspired by Marin Shakes’ work at near-by San Quentin.  In his bare office, Duke Vincentio (droll, hyper Patrick Russell) decides to leave his sinful city. Vincentio appoints his Deputy Angelo to replace him because he will be a tough, ‘hanging’ judge.

The new judge, buttoned-down Angelo (chilling Joseph Patrick O’Malley), orders that the suburban brothels be pulled down, but he spares his cronies’ city brothels! Holy Angelo will go to extremes to fulfill his Boss’s plan.

In this tyrannical male-dominated system, Angelo grabs for power eagerly, a Puritan-in-Waiting. He is horribly eager to chop off the head of sympathetic young Claudio (heart-warming Brennan Pickman-Thoon) just because he got his fiancée pregnant!

As Claudio, Pickman-Thoon creates a touching young man unjustly accused—victim of a dire penal system, like our own. In this case, the older ruler punishes the young and virile by enforcing extreme, inhumane laws. Claudio moves us deeply; and Angelo embodies the petty Pence and vengeful t-Rump. In his cell, and in his orange prison-for-profit jump suit, Pickman-Thoon radiates honesty—as he debates with his sister Isabella (down to earth Luisa Frasconi) over his coming execution.

For witty comedy, Lucio the local playboy and pimp (lively, funny Ariel Zuckerman) wears a pork-pie hat, and fearlessly faces down the outdated, vengeful laws. Lucio bounces all over the stage, insulting everyone.  Lucio fights back #Resist—with bold jokes, asserting the people’s rights.

The Curriers’ work with prisoners remind us that lives can be redeemed. Even Isabella, a novice nun, leaves her convent to beg Angelo to reverse her brother’s death sentence. She sharply confronts Deputy Angelo, while the nuns carry #MeToo signs reading: “Christine & Anita Told the Truth!”

O cunning enemy, that, to catch a saint
With saints dost bait thy hook! Most dangerous
Is that temptation that doth goad us on
To sin in loving virtue.
(II, 2, 179-182)

I recommend “Measure for Measure,” a dark comedy fitted for our corrupt and contemptuous time. So many profound and touching speeches on hypocrisy, religion, equality, and love—we all can find our sweet spots in this updated Shakespeare treat.