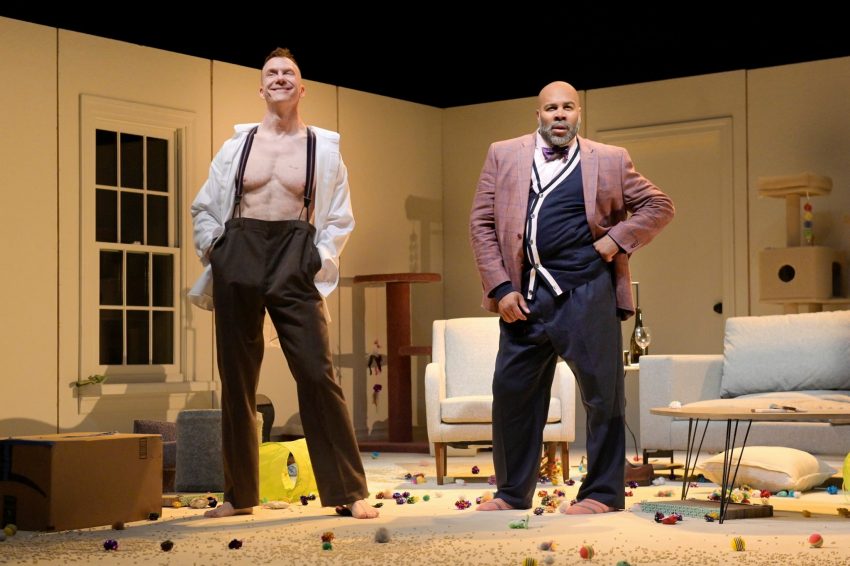 Once that cat climbs out of his grave and assumes human form—even though he’s been skinned alive—all bets are off! And that’s just the beginning of Jen Silverman’s witty, bold, off-the-wall new comedy “Wink.”

Angry Sophie (Liz Sklar) and guilty Gregor (Seann Gallagher), an uptight young professional couple, cannot agree on much. She is lamenting the loss of her cat, and he is hiding the fact that he skinned and buried said cat. Their petulant debates are funny as hell, but why did he do it?

The 75 minute roller coaster whizzes us through laugh-out-loud changes in the wink of an eye. Sophie’s temper tantrum throws the whole stage set into a permanent chaos.

Sophie lavished lots of love and affection on Wink, to the exclusion of her rule-bound husband. Gregor tries to be a good corporate tool, but he’s starved for love. Their superficial squabbling brings the house down, revealing they are both out of touch with their basic instincts.

They are both seeing Doctor Frans (Kevin R. Free), a psychiatrist who dishes out socially approved, culturally safe advice. Frans tells them, repeatedly, to repress their feelings, to “STOMP IT DOWN!” Their therapy sessions turn into empty affirmations of U.S. conformity.

Doctor Frans, played with great flair by Free, as a buttoned-up, preachy Puritan, feels ill-at-ease with his body, his feelings, and his patients. He imposes his anti-sexual ideas on the unhappy but hilarious Sophie and Gregor until the good gay Doctor, himself, is transformed by a surprise visitor.

Guess who comes for a visit? The resurrected Wink moves in and starts a strange affair with the Doctor. And the uptight therapist falls easy prey to the feline’s animal instincts. The brilliant union of Wink and the Doctor brings richness and fun, stirring wild laughter. Watkins and Free make a great odd couple. The complex cat and the deprived doctor break new ground for love.

Watkins’ Wink demonstrates how a cat works sensually and murderously, teaching the Doctor how to feel the earth beneath his bare feet. Together they illustrate how to acquire the beautiful traits of our beloved. Wink even takes on a few civilized traits during his quest. It’s a touching and transcendent moment when Wink makes an un-feline choice.

Gregor goes through his own revolutionary changes, sporting cat fur and harking back to caveman instincts. As Gregor, Seann Gallagher brilliantly regresses to earlier stages of evolution. His transformation is fascinating, fun, and wildly, comically absurd.

Sophie’s life changes move her out into a wider world. Liz Sklar touchingly depicts a constrained woman moving outward, violently, to liberate her masculine, warrior self.

Two couples, including the cat Wink, show us how we live, and what we settle for. Are we also willing to give up love, caring, and sexuality? In “Wink,” Jen Silverman makes us think about the lies and the pressures that make us crazy. Silverman blends satire, laughter, and love magnificently in her perceptive, raucous comedy–definitely had me laughing out loud in a wink!